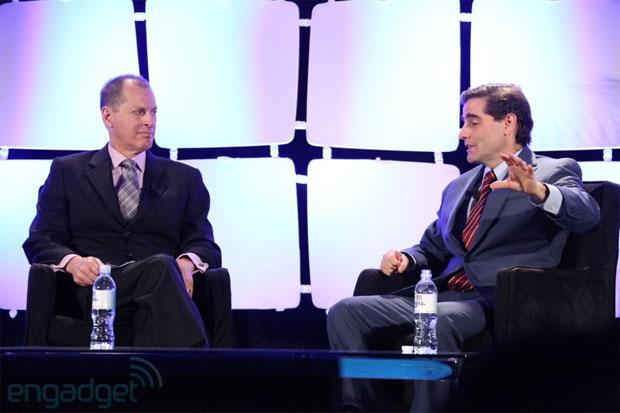 Ever suffer through the painfully slow bottleneck of public WiFi? Sure you have -- Airports, coffee shops, even your neighbor's unprotected home network are limited by the current WiFi spectrum. FCC Chairman Julius Genachowski says it's a problem, and wants to clean up the mess. Speaking with Gary Shaprio at CES, Genachowski revealed that he's been working with the DoD and other Government agencies open up more bandwidth for WiFi. Areas like New York City have an abundance of spectrum set aside for TV licenses, he says, airwaves that could serve the public better for WiFi or cellular networks.

"The rest of the world is watching us," he told Shapiro. "We have to get it right... ...we need to have a nationwide, unlicensed, continuous, same-frequency platform for innovation." To do that, the FCC will need to wrench spectrum from the hands of broadcasters, and redistribute it. "We can reorganize it and ensure everybody gets a good share." It's an uphill battle, but one the chairman recognizes as important. "We predict a WiFi traffic jam, and we need to fix it... ...WiFi is such an integral part of our broadband ecosystem, and we need to make sure that we pay it sufficient attention." Check out the rest of Shaprio and Genachowski's dialog in our ongoing liveblog.

In this article: 5ghz, CES, CES 2012, CES 2013, Ces2012, Ces2013, FCC, Gary Shaprio, GaryShaprio, Julius Genachowski, JuliusGenachowski, Spectrum, WiFi, wifi spectrum, WifiSpectrum
All products recommended by Engadget are selected by our editorial team, independent of our parent company. Some of our stories include affiliate links. If you buy something through one of these links, we may earn an affiliate commission.