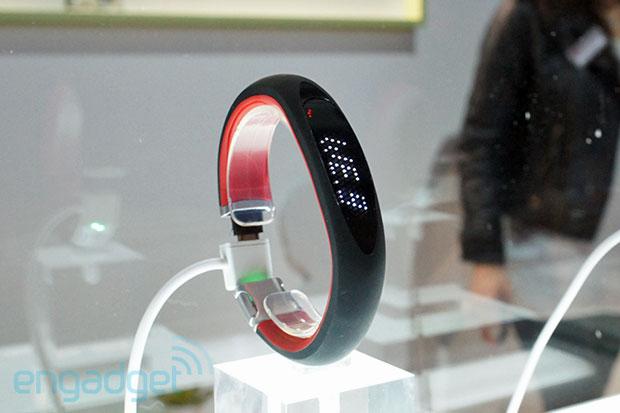 We've seen our fair share of wearable tech here at CES already and LG is looking to cast its hat in the ring as well. A waltz through the company's booth revealed the Smart Activity Tracker: a device that rests comfortably on the wrist, much like the Nike+ FuelBand or the Jawbone UP. Despite sharing some aesthetic similarities with the former gadget -- like a dotted LED display, USB clasp and soft-touch rubber coating -- LG's model has a few more tricks up its sleeve. First, the Smart Activity Tracker is compatible with both iOS and Android using the Fitness Band app to track, monitor and share your fitness habits (no big surprise given LG's handsets run Google's OS).

As you might expect, the wearable touts Bluetooth for connecting to your smartphone and an accelerometer for tracking purposes. However, LG tacked on an altimeter for more accurate location data (the world ain't flat, you know) and the display can show call info during a run while also offering media controls for navigating through those playlists. Speaking of the display, this one is swipeable, allowing the user to cycle through without pressing a button repeatedly. Smart Activity Tracker bands will also sync with LG's smart TVs and fitness apps like Let's Dance to offer a workout from the comforts of your living room. Unfortunately, these aren't scheduled to arrive until sometime in the heat of summer, but when they do, there will be a few color options to suit those personal preferences. For now, a brief demo awaits after the break.

In this article: ces2013, ces2013-highlight, hands-on, lg, SmartActvityTracker, video, wearable, wearables
All products recommended by Engadget are selected by our editorial team, independent of our parent company. Some of our stories include affiliate links. If you buy something through one of these links, we may earn an affiliate commission.