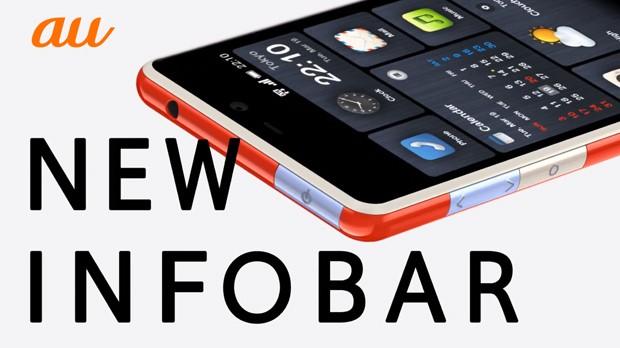 KDDI's funky au Infobar is back! Once again designed by the famed Naoto Fukasawa, this A02 -- co-developed by HTC -- brings the series up to date with Qualcomm's 1.5GHz quad-core APQ8064 (but with just 1GB of RAM), 4.7-inch 720p display, 16GB of storage, microSD slot, 2,100mAh battery, LTE radio (800/1500) and Android 4.1. Better yet, this phone also supports both CDMA2000 800/2100 and WCDMA 850/1900/2100, making it a great global phone. Judging by one of the demo clips after the break, it seems that this Infobar's 8-megapixel main imager (with F2.0 lens) and 2.1-megapixel front-facing camera take advantage of HTC's ImageSense chip for speedy burst shots. Likewise, you'll find Beats Audio built into the system. As per typical Japanese mobile phone, the usual NFC (with Osaifu-Keitai mobile wallet), 1seg TV tuner and infrared are also packed inside the 9.7mm-thick, 147g-heavy waterproof (IPX5 and IPX7) and dustproof (IP5X) body.

We're already fans of the iconic nishikigoi (meaning "brocaded carp") color scheme as pictured above, but what really caught our attention this time are the fluid animations and uniqueness of the "iida UI" 2.0 (iida stands for "innovation," "imagination," "design" and "art") by interactive designer Yugo Nakamura. As you'll see in the video clips after the break, the home screen here shares some similarities with Windows Phone 8's counterpart -- in the way items snap to grid and resize, even though the former is enhanced by plenty of bouncy animation, more colors and funny sounds (designed by Japanese musician Cornelius). Expect this A02 -- which is also available in blue or gray -- to hit the Japanese market in mid-February. 14
In this article: 1seg, android, apq8064, au, Cornelius, htc, htx21, iida, iida ui, IidaUi, imagesense, impression, Infobar, infobar a02, infobara02, japan, kddi, MDM9615, mobilepostcross, Naoto Fukasawa, NaotoFukasawa, phone, smartphone, video, Yugo Nakamura, YugoNakamura
All products recommended by Engadget are selected by our editorial team, independent of our parent company. Some of our stories include affiliate links. If you buy something through one of these links, we may earn an affiliate commission.