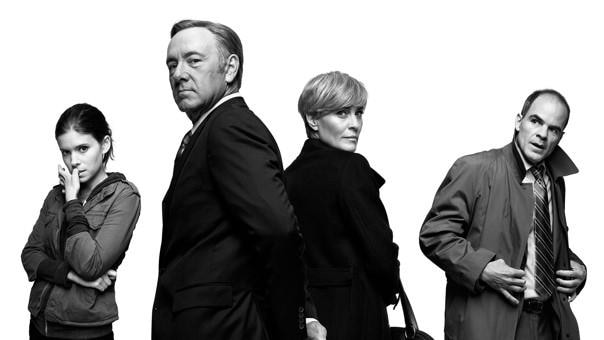 Just as it had promised, Netflix today released its original series House of Cards to its many, many subscribers. There's more good news, however, as the the streaming giant's giving those without the necessary account credentials a chance to see what the show is all about, giving non-paid users access to the very first episode at no cost. Meanwhile, those who shell out the monthly fee will be able to catch all 13 episodes of House of Cards in one go, with Netflix obviously taking a different approach than what we're accustomed to seeing in new series from the likes of HBO or Showtime. Naturally, should folks like what they see from Kevin Spacey, Kate Mara and the rest of the cast, they'll have to sign up for the service in order to keep up with the story -- which, we'd say, is exactly what Netflix wishes for. Have some time to spare? Then hit that source link below to watch the House of Cards premiere (that's assuming you haven't done so already, of course).

Netflix Makes First Episode Of House Of Cards Available To Non-Members For One Month Beginning February 1, 2013

BEVERLY HILLS, Calif., Feb. 1, 2013 /PRNewswire/ -- Netflix is making available to everyone in all Netflix territories the first episode of the highly-anticipated, critically-acclaimed drama series "House of Cards" to enjoy for one month, beginning February 1, at netflix.com/houseofcards.

"The creative team in front of and behind the camera have delivered a riveting 13-chapter narrative that we're proud to present to Netflix members today," said Ted Sarandos, Chief Content Officer, Netflix. "By offering the first episode for free, including to non-members, we are opening up this fascinating world for everyone to see and are confident they'll want more."

Current Netflix members are now able to watch the entire 13-episode first season of the drama series, in territories where Netflix is available – U.S., Canada, U.K., Ireland, Latin America, Brazil and the Nordics.

From director David Fincher ("The Girl with the Dragon Tattoo," "The Social Network"), who directed the first two episodes; award-winning playwright and Academy Award® nominated screenwriter Beau Willimon ("Farragut North," "The Ides of March") and Academy Award® winner Eric Roth ("Forrest Gump," "Munich"), "House of Cards" is based on the BBC miniseries of the same name. This wicked political drama starring Kevin Spacey, Robin Wright and Kate Mara slithers beneath the curtain and through the back halls of greed, sex, love and corruption in modern Washington D.C.

An uncompromising exploration of power, ambition and the American way, the series orbits Francis Underwood (Spacey), the House Majority Whip. Underwood is the politician's politician – masterful, beguiling, charismatic and ruthless. He and his equally ambitious wife Claire (Wright) stop at nothing to ensure their ascendancy. In addition to Spacey, Wright and Mara, the series stars Corey Stoll ("Midnight in Paris"), Kristen Connolly ("The Cabin in the Woods"), Michael Kelly ("The Adjustment Bureau") and Sakina Jaffrey ("Definitely Maybe").

About Netflix:
Netflix is the world's leading Internet television network with more than 30 million members in 40 countries enjoying more than one billion hours of TV shows and movies per month, including Netflix original series. For one low monthly price, Netflix members can watch as much as they want, anytime, anywhere, on nearly any Internet-connected screen. Members can play, pause and resume watching, all without commercials or commitments. Other upcoming Netflix original series include Eli Roth's murder mystery "Hemlock Grove;" the fourth season of the critically acclaimed comedy "Arrested Development;" Jenji Kohan's series "Orange is the New Black," which stars Taylor Schilling, Laura Prepon and Jason Biggs; the Ricky Gervais comedy drama "Derek;" and the second season of "Lilyhammer," which stars Steven Van Zandt. Learn more about how Netflix (NASDAQ: NFLX) is pioneering Internet television at www.netflix.com or follow Netflix on Facebook and Twitter.

In this article: free, hdpostcross, houseofcards, Netflix, preview, streaming
All products recommended by Engadget are selected by our editorial team, independent of our parent company. Some of our stories include affiliate links. If you buy something through one of these links, we may earn an affiliate commission.