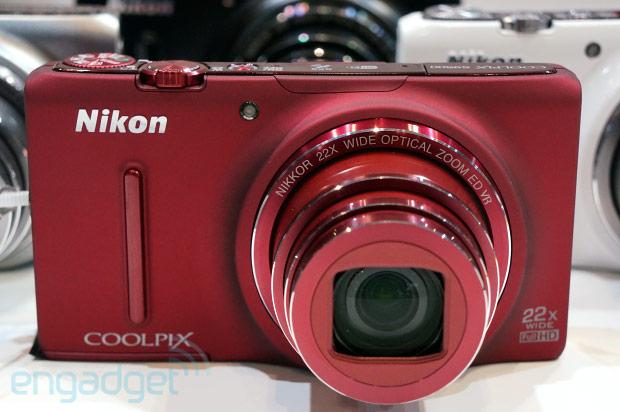 Ready to check out some more point-and-shoots? That's great news! We've got a few more to share. The first two, the Coolpix S9500 and S9400, are nearly identical, save for a few key features. Appearance-wise, it's difficult to distinguish between the two, especially when they're powered off. Once you flip them on, however, you'll probably notice the S9500's whopping 22x zoom lens, compared to an 18x optic on the S9400. Both include 18.1-megapixel CMOS sensors and very crisp 3-inch OLED displays, while the higher-end S9500 ($350), which is likely to be the only US-bound model, adds built-in WiFi and GPS. Not to be overlooked, the S5200 includes a 16-megapixel CMOS sensor, a 3-inch VGA LCD, 6x optical zoom lens and WiFi for $180.

We caught up with all three compacts at Nikon's CP+ booth this week, and we were quite impressed with the S9500 in particular. Despite the 22x zoom lens, the camera was very thin and light -- it should be able to tuck into a pocket just fine. It included a premium finish, just like its slightly less capable sibling, the S9400, and performed very well during our hands-on. Both of these shooters have sharp OLED displays, which really looked fantastic, along with dedicated mode dials, though we were disappointed to see that Nikon omitted manual shooting options, in favor of some scene presets. The S5200, which was on display in red and blue, had a similar feel and finish, though it was quite a bit more compact, and lacked the OLED screen and mode dial. All of these models are set to ship later this month, but if you're eager to learn more, you can check 'em out in our hands-on after the break. 15
In this article: camera, cameras, coolpix, cpplus, cpplus2013, hands-on, nikon, S5200, S9400, S9500, video
All products recommended by Engadget are selected by our editorial team, independent of our parent company. Some of our stories include affiliate links. If you buy something through one of these links, we may earn an affiliate commission.