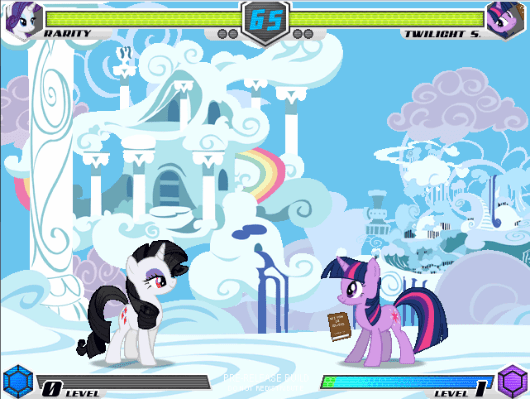 Indie developer/non-profit brony collective Mane6, the folks responsible for the unofficial My Little Pony fighting game MLP: Fighting is Magic, have received a cease and desist order from Hasbro Inc., according to its official blog. As a result, all Fighting is Magic related material has been stripped from Mane6's official YouTube channel and other online media portals.

"We have attempted negotiating with Hasbro for the continued use of the property in our non-profit, voluntary project, but so far we haven't received an answer," the update reads. "As such, we're complying with the contents of the C&D letter until we receive answer from their PR and/or Legal departments."

Whether development on the title continues behind the scenes remains uncertain. MLP: Fighting is Magic was one of the many games under consideration for this year's EVO 2013 Championship Series, with its community raising a total of $5,280 during the tournament's breast cancer research charity drive competition.

[Thanks, Aries!]
In this article: cease-and-desist, copyright, fighting-game, Hasbro, Mane6, MLP, MLP-Fighting-is-Magic, My-Little-Pony, pc, unofficial
All products recommended by Engadget are selected by our editorial team, independent of our parent company. Some of our stories include affiliate links. If you buy something through one of these links, we may earn an affiliate commission.