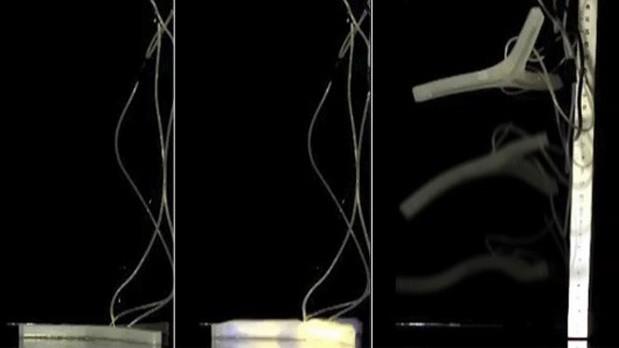 Harvard University has pushed its soft robot concept in strange directions, but an exploding robot? That takes the cake. A new three-legged, silicone-based variant of the robot is filled with methane and oxygen that, when jolted with electricity, explode and trigger violent pressure that pushes the limbs off the ground. As you'd imagine, the results weren't exactly timid during testing -- the example robot jumped over 30 times its body height, and it would have jumped higher if not for additional tubing holding it down in the lab. The power easily eclipses that of pure air, and could be vital to rescue robots or other public safety machines that could very literally leap to someone's aid. Don't anticipate exploding automatons on the streets anytime soon. We'll just be glad that, if they do arrive, they'll be trying to help us rather than kill us.

In this article: exploding, explosion, harvard, harvarduniversity, robot, science, soft, softrobot, video
All products recommended by Engadget are selected by our editorial team, independent of our parent company. Some of our stories include affiliate links. If you buy something through one of these links, we may earn an affiliate commission.