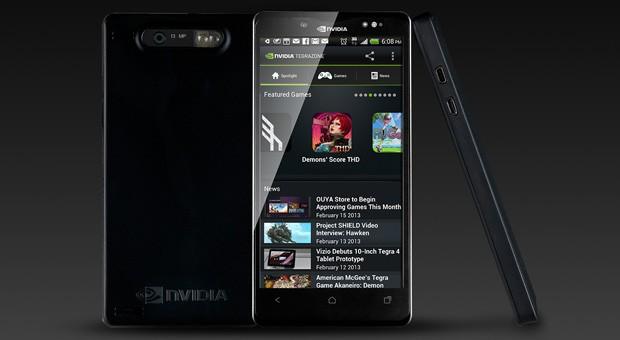 Did NVIDIA say it would stick to one new mobile processor design per year? If so, it's not worried about its own rules: meet the Tegra 4i. The 4-plus-1 chip formerly known as Project Grey is a Tegra 4 mostly in name, and goes for integration rather than raw power. It sheds the newer Cortex-A15 architecture of the Tegra 4 for a spruced-up 2.3GHz Cortex-A9 with the i500 LTE modem built directly into the chip die -- a move that cuts the surface area in half and simplifies the hardware, even as it supposedly outruns equivalent competition. The design is more than just an overclocked Tegra 3 with 4G inside, though. The 4i touts 60 graphics cores versus the 12 of its ancestor, and inherits the high dynamic range photography and video engine of the Tegra 4. NVIDIA is demonstrating the 4i's chops through the Phoenix (pictured above), a 5-inch, 1080p reference Android smartphone that builders can use as a starting point. There's no immediate customers mentioned for the CPU, although we suspect those are coming soon.

Speaking of that camera technology, NVIDIA has also given it a name. Chimera, as it's now called, isn't just about making HDR available for every photo and video. The mix of CPU and GPU processing can capture HDR panorama shots without requiring a single-direction sweep, letting a would-be Ansel Adams 'paint' the panorama out of order. The autofocusing engine is also smart enough to include subject tracking with an exposure lock. Both 8-megapixel Aptina and 13-megapixel Sony camera sensors can already support Chimera, which gives us a clue as to just what imaging we can expect with the first batch of Tegra 4 and 4i devices.

Tegra 4i Delivers Highest Performance of Any Single-Chip Smartphone Processor

SANTA CLARA, Calif.-February 19, 2013- NVIDIA today introduced its first fully integrated 4G LTE mobile processor, the NVIDIA® Tegra® 4i, which is significantly faster yet half the size of its nearest competitor.

Previously codenamed "Project Grey," the Tegra 4i processor features 60 custom NVIDIA GPU cores; a quad-core CPU based on ARM's newest and most efficient core- the R4 Cortex-A9 CPU- plus a fifth battery saver core; and a version of the NVIDIA i500 LTE modem optimized for integration. The result: an extremely power efficient, compact, high performance mobile processor that enables smartphone performance and capability previously available only in expensive super phones.

"NVIDIA is delivering for the first time a single, integrated processor that powers all the major functions of a smartphone," said Phil Carmack, senior vice president of the Mobile business at NVIDIA. "Tegra 4i phones will provide amazing computing power, world-class phone capabilities, and exceptionally long battery life."

Tegra 4i's new 2.3 GHz CPU was jointly designed by NVIDIA and ARM, and is the most efficient, highest performance CPU core on the market.

"Tegra 4i is the very latest SoC solution based on the ARM Cortex-A9 processor and demonstrates the ability of ARM and our partners to continue to push the performance of technology and create exciting user experiences," says Tom Cronk, executive vice president and general manager, processor division, ARM. "ARM and NVIDIA worked closely to further optimize the Cortex-A9 processor to drive performance and efficiency in areas such as streaming and responsiveness. This is an example of the collaboration and innovation that enables ARM technology-based solutions to be market drivers through multiple generations of SoC solutions."

Utilizing the same architecture as Tegra 4's GPU, Tegra 4i features five times the number of GPU cores of Tegra 3 for high-quality, console-quality gaming experiences and full 1080p HD displays. It also integrates an optimized version of the NVIDIA i500 software-defined radio modem which provides LTE capabilities, and makes networking upgradability and scalability fast and easy.

"NVIDIA's Tegra 4i appears to outperform the leading integrated LTE chip significantly, and also benefits from an integrated 'soft-modem' that can be re-programmed over-the-air to support new frequencies and air interfaces – something other modem vendors can only dream of," said Stuart Robinson, director, Handset Component Technologies Program at Strategy Analytics."

Tegra 4i mobile processor's camera capabilities include the NVIDIA Chimera™ Computational Photography Architecture recently announced in Tegra 4. This delivers many advanced features, including the world's first always-on high dynamic range (HDR) capabilities, first tap to track functionality and first panoramic photos with HDR. NVIDIA also introduced its "Phoenix" reference smartphone platform for the Tegra 4i processor to demonstrate its unique mobile technologies. Phoenix is a blueprint that phone makers can reference in designing and building future Tegra 4i smartphones to help get them to market quicker.

NVIDIA developed Chimera to enable mobile photography to be as flexible and creative as it is convenient. Its suite of new features, supported by enormous visual computing power, delivers capabilities far beyond what's currently available, even in high-end dedicated DSLR cameras, to mainstream smartphones and tablets.

"NVIDIA's Chimera architecture takes mobile imaging far beyond what consumers have come to expect from the phones and tablets," said Brian Cabral, Vice President of Computation Imaging at NVIDIA. "Capabilities that until now have been reserved for professional photographers – like instant HDR and HDR panoramic shots and flawless image tracking – are now within easy reach for the rest of us."

First revealed at CES 2013, the architecture redefines mobile imaging with always-on HDR photos and videos. This allows camera users to instantly capture high-quality, HDR images similar to how the human eye sees the world – in a vast array of locations and scenes, and under diverse lighting conditions.

Additional new features include HDR panoramic, which takes wide-angle, or "fish-eye," shots that normally require an expensive digital single-lens reflex camera. The Chimera architecture captures a scene while the camera moves – from side to side, up and down or diagonally – effectively "painting" a panorama in real time from many angles and in any order the user wants. In contrast, competing offerings must either be moved in one direction along a single horizontal plane, or require significant amounts of post processing – taking up to 35 seconds – to stitch together the panorama.

In another industry first, the Chimera architecture includes persistent tap-to-track technology, which allows users to touch the image of a person or object to focus on within a scene. The camera then locks in on that subject whether it moves or the camera is repositioned to a better angle, while maintaining proper focus. Persistent tap-to-track also adjusts the camera exposure depending on any movement, helping avoid under- or over-exposure of the image's subject or background.

NVIDIA Chimera is available as technology integrated into the Tegra 4 family, including Tegra 4 – the world's fastest mobile processor – and the new Tegra 4i – the first integrated Tegra LTE processor.

In this article: android, aptina, arm, chimera, cortex-a9, i500, lte, mobilepostcross, nvidia, phoenix, processor, sony, tegra, tegra4i
All products recommended by Engadget are selected by our editorial team, independent of our parent company. Some of our stories include affiliate links. If you buy something through one of these links, we may earn an affiliate commission.