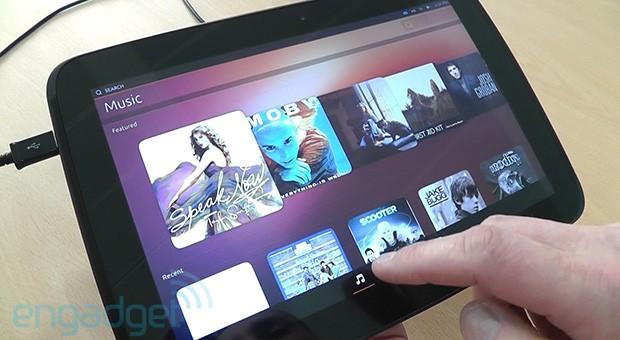 Ubuntu's Touch Developer Preview was originally put forward as something for "enthusiasts" as well as developers. Well, having been hands-on with the code that will be made public tomorrow, we'd say it requires enthusiasm a-plenty -- perhaps even amateur coder quantities of the stuff. That's because a lot of core functionality is still missing from the OS, such as the ability to play music files or import real-life contacts, and there's a long way to go if it's to be signed off as "code complete" in October.

On the other hand, this is really just a statement of the obvious. Canonical has been pretty clear that the main purpose of this early release is to lure in developers and get them to contribute to the fundamental stages of the project. Furthermore, the video after the break shows that there are many aspects of the OS which work fine -- such as the gallery and video apps, the "side stage" and HUD features, and also general performance on the Nexus 10's hardware. The UI merges some Kindle- and Windows 8-esque features with things that are totally original -- like responsive design which allows the exact same OS and apps to run on a phone, tablet, TV or desktop. We certainly hope it generates interest -- not only among developers but also among device manufacturers who want to do more than just talk about differentiation.

In this article: developer, exclusive, hands-on, linux, mobilepostcross, OS, preview, touch, ubuntu, video
All products recommended by Engadget are selected by our editorial team, independent of our parent company. Some of our stories include affiliate links. If you buy something through one of these links, we may earn an affiliate commission.