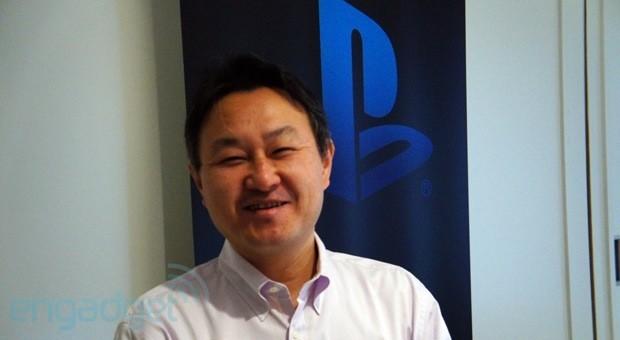 The only hardware shown on-stage during Sony's PlayStation 4 event was the retooled DualShock controller, the DualShock 4. No box. No PS4 Eye. No new version of Move. As for the console itself, its absence makes some sense in light of today's news from SCEA prez Jack Tretton that the console's internals are "still in development in terms of final specs and design." So, how final is the only piece of hardware Sony was willing to trot out? "It's near final. It's just gonna be small tweaks being done," Sony Worldwide Studios head Shuhei Yoshida told us in an interview this morning.

Sadly, he also admitted we won't be able to touch any of it anytime soon. "By E3, I think" was the best he could offer. He blamed Sony's hardware folks for not allowing access, despite him pleading with PR to give hands-on time. "I was just asking our PR team can we just let you touch this stuff. Our hardware guys don't want you to find out some detail that ..." he said, trailing off. "Some dirty secret?" we asked. "Of course," he responded with a smile.

Moving on to Vita and the Remote Play functionality on PS4 (which allows you to play any PS4 game on your Vita, via streaming), Yoshida said that -- unlike with the PlayStation 3's Remote Play functionality -- Sony's asking devs to try their game via Remote Play on Vita before submitting final code for publishing. He also said that, using Remote Play, developers could implement Vita-specific controls. "Some PS Vita games make use of the edge of the screen to add contextual buttons -- that works really well, I think, and it's easy to see. So that kind of thing I'd like to see developers do on PS Vita over Remote Play," Yoshida explained.

He also apologized for not showing the final box, getting out ahead of the inevitable question from the room full of journalists. But hey, we sympathize -- Sony's gotta save something for E3, right? PlayStation Plus on PlayStation 4 may also be on that list; when we asked Yoshida about its presence on the next Sony game console, he coyly answered, "I know the answer, but we're not talking about it. I'm a subscriber, so I'd like to see it." Us too!

In this article: hdpostcross, playstation4, playstationvita, ps4, psvita, remoteplay, shuheiyoshida, sony
All products recommended by Engadget are selected by our editorial team, independent of our parent company. Some of our stories include affiliate links. If you buy something through one of these links, we may earn an affiliate commission.