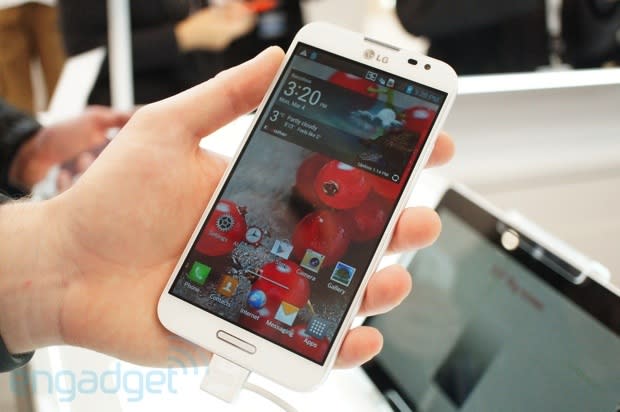 The Pro version of last year's Optimus G comes in two flavors: Japan gets a 5-inch, 1080p phone, while Korea (and the US) is treated to a 5.5-inch phone at the same resolution, but with Qualcomm's latest mobile chip, the Snapdragon 600. We're getting to grips with the Korean flavor here at MWC and while we're still waiting on launch dates more specific than Q2, we couldn't help taking this particular G Pro for a spin.

While the original wasn't particularly lacking in the battery department, that increase in resolution has been fortunately accompanied by a bigger battery, up from 2,100mAh to 3,140mAh in the Korean edition and 3,000mAh in the Japanese. Design-wise, the lines are softer, more curved and -- if we're honest -- more like the Galaxy S III. There's now a curved physical home button lodged beneath the screen, with capacitive back and menu buttons on either side of it that light up with the faintest glow. The back of the phone now gently curves into the rest of the phone, with that eye-catching "crystal reflection" effect now subtly shading into the sides. The rear panel goes for a grid pattern that's more reminiscent of the Nexus 4 than it is of the Optimus G. It retains the same surprisingly light build quality of its predecessor, however, that makes us feel like a short fall could render this device a useless pule of glass shards and plastic pieces.

After the break, you can check out some more of our impressions, alongside the obligatory hands-on video, of course. We've been aching to try out another phone with a next-generation Snapdragon processor, and the 1.7GHz quad-core beast didn't disappoint in our brief time with the device. Navigation and basic tasks were buttery smooth, even with LG's slightly gaudy 3D animations and custom UI. And the stock browser turned in a more than respectable 911.7ms on SunSpider which is more than 300ms quicker than its predecessor at launch.

The 400-ppi display is, unsurprisingly, simply stunning. While it doesn't have the deep saturation and abyssal blacks of some panels out there, it's amazingly crisp and viewing angles are quite impressive. So, all the better to view your 13-megapixel stills taken on the new camera sensor. There's also a 2.1-megapixel front-facing camera, and one of the new features LG's talking up is the ability to film from both lenses at the same time, displaying one feed on top of the other -- perfect for embedding your reaction to something awesome while showing that very spectacle at the same time.

Another new addition is LG's new Panorama VR feature, which we decided to take for a spin. LG's take on Google's own photo sphere camera option, it worked almost as well as the Nexus 4. That is to say, not particularly well at all. Stitching the photos was extremely obvious and, to be honest, the UI was actually more confusing than the stock 360-degree photo tool in Jelly Bean.

The phone arrived in Korea earlier this month, but if you've decided to pause that Optimus G purchase in the US, be aware that the launch date could be any point over the next three months. While we're reserving full judgement for a review, we are impressed with how LG's decided to move forward with one of its most well-received smartphones in recent memory.

In this article: hands-on, lg, LGoptimusgpro, mobilepostcross, mwc, mwc-2013, mwc2013, Optimus G Pro, optimusgpro, snapdragon600, video
All products recommended by Engadget are selected by our editorial team, independent of our parent company. Some of our stories include affiliate links. If you buy something through one of these links, we may earn an affiliate commission.