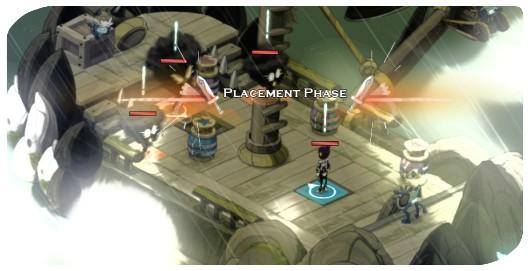 Wakfu is not what many would consider a standard MMORPG. Its developer, Ankama, has never pushed out normal products. After all, this is a French company we're talking about. That's right, as in France, the same place that brought us amazing (but unusual) creations like Ryzom's plant-planet and the incredible art of Moebius. There's something going on over there, something that is refreshingly different from the typical game or art design. When I attended GDC Online 2011, I was floored by a session featuring Ankama's David Calvo called Chaos in Motion: Transmedia as a Living Community Experience. The panel implored developers to take a chance on development, to give players something unique to experience and world to have an impact on.

That was a while ago, however. The game launched a year ago, but the studio had an imperfect year. Let's follow the timeline from then to now.

Last year, I wrote an article about preparing for the release of such an interesting game. I had enjoyed Dofus but felt that it needed quite a few tweaks to be better. Wakfu seemed to be improving exactly the right elements. The problems with Wakfu were apparent right away, however. Really they are the same problems faced by any game built with an old-school mentality and utilizing such unusual settings and mechanics. If these hard-to-grasp mechanics and questlines aren't relatively easy to explain to a new player, that new player will just go find a game that has a bit more hand-holding. Make no mistake; when I first experienced the sometimes confusing gameplay of Wakfu, I was both thrilled and concerned.

Soon enough, the company was introducing two new classes, the Sacrier and the Xelor's Timeglass. Just look at those two class names and you'll begin to get an idea how confusing the game might feel to someone who is used to, well, almost anything else. This appears to be the way of the French game designers; they enjoy high-brow design and humor, love unusual art styles, and will do anything to be different.

Dev diaries started to roll out, including one that introduced the brilliant political and ecological particulars of Wakfu. Again, though, all these systems are not easily understood without some homework. As much as I love a good, deep game system, I cannot stomach having to do a Google search to find a guide to link to a forum post that might or might not answer my basic questions about the system. Yes, the game provides some interesting, interactive, and wonderfully scripted tutorials to help clear up some of the confusion, but it skips basic forms of help that would clear things up. Is it confusion for art's sake?

Monk Island was talked about on April 10th, and we showcased a video that walked players through the often humorous new area. Humor plays a large role in Wakfu, but it's rarely overdone, and it never takes away from the fact that the entire world is based on some pretty serious tragedy. Wakfu shares a lot with Ryzom, another title that offers a beautiful, unusual world unlike one we have ever seen, both with undercurrents of tragedy running below the surface. Soon after, I out Wakfu forward as one of the games with the best weather systems out there. Wakfu's weather system is simple but actually affects gameplay by letting players know when they should be growing certain plants or performing certain tasks.

Next we heard about the Foggernaut class (those class names!), an unusual ranged class that I can only describe as a steampunk quick-draw artist. I attempted to play one a few times, even live in game, but found myself largely confused. Each player I talked to had a different strategy for the class, only adding to my confusion. I ended up going with blasting my enemies away and gave up on using the class' helpful gadgets and gizmos.

In another article I decided to lay out some of the subscriptions I maintain and why, and Wakfu was on the list. It's a cheap one, but the more I read articles and comments about the game, I am convinced that the single most detrimental thing to the game has been its subscription fee. As many of you might already know, I have no issues whatsoever with a subscription. I simply prefer a completely free game with a cash shop tacked on top because it offers the most choices and can make the same profits. I certainly am not a fan of tiered or velvet-rope models, ones like you'll find in Wizard101 or other games. Keeping with the theme of the rest of the game, Wakfu's sub model is confusing. Players often ask me what is unlocked or not with a subscription, and I cannot tell them without referring to a FAQ or wiki page. For the record, that sort of confusion is never a good thing and only leads to "I heard" rumors that spread false information in comment sections and blog posts.

I have since let my subscription go and put my money into the cash shop, but not because I dislike the game. I simply cannot justify the tiny fee because I am not moving quickly enough to take advantage of the paid options. At least I think I cannot. Who knows? I'll have to check the darned FAQ again.

You knew we were coming to this point, didn't you? Sure enough, SquareEnix confirmed layoff rumors but assured everyone that Wakfu (and the relaunch of Final Fantasy XIV) would not be affected. I continued on to give Wakfu top honors in my annual Frindie Awards, in spite of my concerns about the game. The fact is that out of that year's crop of titles, Wakfu stood out as original, brave, and wonderfully (but sometimes needlessly) complex. I still have a love-hate relationship with the Ankama creation.

In most recent news, we found out that SquareEnix has decided to move away from publishing Wakfu in North America, handing the reins back to Ankama. Many players seem to think this is a proper move and that the game will be handled differently from March 1st on, but I tend to think that the game's biggest challenges are still ahead, starting with the confusing subscription. My thought on subs is that they are going to have a hard time existing not only because there are ever-fewer people used to paying them but because there are more and more titles out there that force no subscription, ever. The free-to-play model has many modes, including freemium, velvet-rope, cash-shop only, and unlimited trial, but the essential idea is that forcing people to pay to access random sections of content might be a mistake, especially for unusual titles like Wakfu. If you look at the list of differences between a free player and a subscriber, you'll see just how silly some of the differences are. "Money can't be used" versus "sell, trade, beg." What the what?

Of course, I recognize how inexpensive the sub actually is and how much content a player gets for that tiny price. But -- and this moves us on to my next issue with the game -- that content must be accessible. Not easy, but accessible. In Wakfu, content is often delivered in confusing and inconvenient ways. I am in the middle of a quest in game right now and cannot figure out its next step. I have asked in game, checked on the wiki, and searched the often useless website and have had no luck. The quest information system in Wakfu is in dire need of a simple tweak: more information in the information window. If a player has to leave your game to find out information that should be present within the game, you might have a problem.

Wakfu is such a unique beast that its faults are almost too easy to overlook. While I absolutely applaud its originality, I cannot understand why the developers insist on forcing players to grind because a quest they want to do is too confusing. Here's hoping that Ankama can eventually do away with the bloated and restrictive payment model and smooth out the website and its broken search function.

Whatever happens, it's been a grand experimental year for Anakama and Wakfu. I wish them nothing but luck and will be playing when I can.

Each week, Free for All brings you ideas, news, and reviews from the world of free-to-play, indie, and import games -- a world that is often overlooked by gamers. Leave it to Beau Hindman to talk about the games you didn't know you wanted! Have an idea for a subject or a killer new game that no one has heard of? Send it to beau@massively.com!
In this article: ankama, beau-hindman, cash-shop, f2p, featured, ffa, ffxiv, final-fantasy-xiv, free-for-all, free-to-play, freemium, opinion, politics, sandbox, se, Square-Enix, SquareEnix, squenix, strategy, strategy-mmo, sub, subscription, turn-based-combat, velvet-rope, wakfu
All products recommended by Engadget are selected by our editorial team, independent of our parent company. Some of our stories include affiliate links. If you buy something through one of these links, we may earn an affiliate commission.