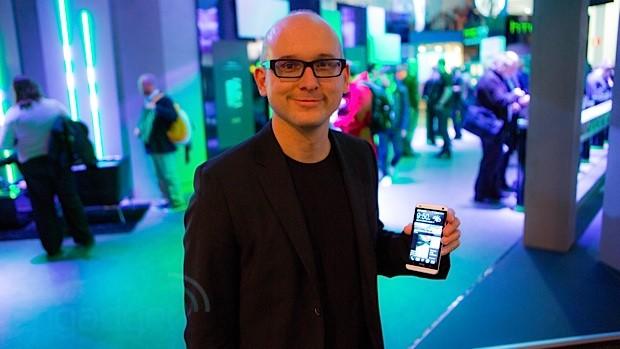 It's no secret that we're big fans of the HTC One here at Engadget -- we've already written at length about the handset's hardware design, software features and imaging chops. At MWC, we were lucky to spend some time with Scott Croyle, VP of design, to discuss the company's latest superphone. We talked about the handset's delightful zero-gap aluminum and plastic unibody and how HTC wanted to "break down that last barrier" of integrating antennae in a metal casing without making compromises. He explained that the One's design was inspired by high-end watches, and it turns out that the zero-gap machining process was developed in-house specifically for this device. Some of the antennae (such as WiFi and GPS) are actually machined as part of the unibody and coexist on the same aluminum panel.

We then chatted about the gorgeous 4.7-inch 1080p display which was supplied by the same manufacturer which provided the screen for the Droid DNA and One X, and the daring Ultrapixel camera, which packs four million large (2µm) pixels and OIS. Mr. Croyle mentioned that while the business side is incredibly important, the decision to use Ultrapixels was focused on the needs of consumers. We asked if limiting the number of pixels was in any way driven by the software -- the desire to implement Zoe and perhaps curtail the massive amounts of data gathered and processed by the feature. It turns out that the development of the sensor and optics started a long time before the software. As for Zoe, "nobody's redefined what a photograph could mean" and HTC was eager to try something new. Our full video interview is yours to watch after the break.

In this article: design, htc, HTC One, HtcOne, interview, mobilepostcross, MWC, MWC 2013, mwc2013, OIS, One, Scott Croyle, ScottCroyle, UltraPixel camera, UltrapixelCamera, UltraPixels, video, Zoe, Zoe Share, ZoeShare
All products recommended by Engadget are selected by our editorial team, independent of our parent company. Some of our stories include affiliate links. If you buy something through one of these links, we may earn an affiliate commission.