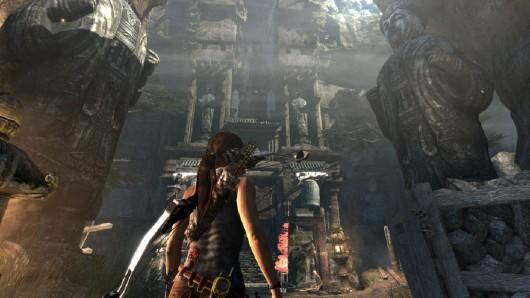 Tomb Raider is important to me. The 1996 original blew my 13-year-old mind, and it showed me what video games could be. It gave me a world ripe for exploration and begged me to suss out all its secrets, something the recent Crystal Dynamics games have also done with aplomb. Tomb Raider, to me, is a series about traveling the world, uncovering the plans and schemes of dead civilizations. It's about spending the better part of an hour to get ancient machinery rumbling again, all in service of opening a massive stone door.

There are no such doors in the new Tomb Raider. Grandiose puzzles have been excised in favor of smaller brainteasers. Globe-trotting has been replaced with a single, open world. Lara Croft spends more time mowing (and bowing) down bad guys than she ever has before.

It was hard for me to come to grips with these facts, and I spent many hours questioning Crystal Dynamics' new direction. That was until I realized the truth: It's all just a long con. Tomb Raider deviates from the series immediately, giving us a young, inexperienced Lara bereft of the infinite cool and confidence we've come to expect. Sailing with a documentary film crew, Lara is searching the Dragon's Triangle for Yamatai, a mythical island once ruled by the Sun Queen, Himiko. It turns out to be a short trip, as a freak storm deposits the ship directly onto Yamatai's shores, leaving the crew stranded and separated.

It's a gut-wrenching beginning, literally for poor Lara, who finds herself kidnapped, punched through the side by an errant piece of rebar and subsequently beaten and bruised during her escape. With the brutal, remorseless nature of the island established, Lara sets out to find her friends and unravel the mystery of Yamatai. Why was her ship drawn here? What happened to the people of Yamatai and their queen? Why have the other shipwrecked inhabitants never escaped?

First and foremost, however, Lara's main concern is survival, which usually hinges more on her aptitude with a weapon than, say, building a fire or looking for food. Conflicts are frequent and long, with hordes of Solarii – Yamatai's resident cult brotherhood – accosting Lara at every turn. Tomb Raider does away with the longstanding tradition of automatic targeting, opting instead for manual third-person shooting. Fans may decry the change, screaming to the hills that Tomb Raider has never been about action. The truth, as I've come to realize, is that Tomb Raider has just never done action particularly well.

The new system gives Lara a greater degree of precision and, along with it, more aggressive and intelligent enemies. Solarii soldiers will flank Lara for better firing positions, flush her from cover with grenades or charge her as the situation demands. Lara herself is intelligent too, and will crouch behind cover without input from the player. Likewise, she'll automatically begin sneaking if there are unaware enemies nearby. There's no need to toggle cover and stealth states with a button – Lara's smart enough to figure it out on her own.

Weapons offer a range of strategic options, bolstered by an upgrade system that allows for even more variety. You can, for example, modify the pistol with burst fire, or add incendiary shells to the shotgun. As fun as these gadgets are, however, it's hard to beat landing the perfect quickdraw headshot with the bow. That fact that you can even do that is a testament to the level of skill that's been invested in the combat. Launch a grenade to destroy an enemy's cover. Use Lara's trademark mobility to scramble up a wall and gain higher ground. You're not just circling enemies and holding down the trigger anymore, you're making choices.

Tomb Raider attempts to parlay its improved combat into a full multiplayer offering, but the paper-thin mode wears out quickly. Multiplayer does nothing to expand on the ideals of Tomb Raider and, apart from the ability to climb atop almost any structure, does nothing to differentiate itself from any other third-person shooter. It's competent enough. It has all the required features – multiple character models, a progression system, copious unlocks, team deathmatch, something akin to capture the flag. Ultimately, however, that's all it feels like: A requirement.

But here we are, 700 words into a Tomb Raider review, and not one mention of actual tombs. Tombs, and the ancient puzzles therein, largely take a backseat to simpler and more modern conundrums. These typically involve contraptions built by the Solarii – heaps of salvaged scrap attached to pulleys and cranks. A handful of optional hidden tombs scattered throughout Yamatai throw a bone to the hardened Tomb Raider fan, but even these tend to be straightforward, usually taking place in small rooms and rarely involving more than two or three moving parts. The "aha moment" of finding a solution is still rewarding, but very few of the game's puzzles really make you work for it.

Thankfully, the lackluster tombs are counterbalanced by Yamatai itself. The island is gorgeous, and navigating each environment is an absolute delight. Lara can still jump, climb and hang with the best of them, and a handful of new skills make things more interesting. Using special arrows, Lara can create rope bridges and zip lines, and she's also able to traverse craggy surfaces with a climbing axe. Whether you're scampering across the bones of old ships, zipping between jagged peaks or scaling the surface of a mountainside temple, getting from A to B is never dull.

Adding to the joy of exploration are dozens of hidden documents, relics and GPS caches littered across Yamatai. Each sheds light on the plot, illuminating the history of Himiko, the Solarii and other groups that have visited the island over the centuries. Tracking all of these down essentially transforms Yamatai into a giant puzzle unto itself, giving you a reason to explore every part of it. I wish there were more levers, cranks and wheels along the way, but I found myself increasingly addicted to the island, and ravenously uncovered every secret it had to offer.

It takes a bit too long for the plot to finally drop its other, decidedly more supernatural shoe, but the payoff is worth it once it does. I dare not spoil it here, but suffice it to say that the final moments wholly solidify Lara's metamorphosis from naive explorer to seasoned adventurer. The arc is drawn perfectly, with the edges of the old Tomb Raider starting to poke through as the story comes to a close, teasing what's yet to come.

And therein lies the con, an entire game pitched as something new, but secretly and slowly easing us all back into the fold. For those who have never delved into the series, Tomb Raider serves as a great first step. The combat is the best it's ever been, puzzles are short but satisfying, and Yamatai is a veritable platforming playground. For the series fanatic, there are loads of secrets to find and a new legend to digest. More importantly, it just may convince a new generation to like Tomb Raider again.

It may not please all of the series faithful, but it's made a believer out of me.

This review is based on a retail copy of the Xbox 360 version of Tomb Raider, provided by Square-Enix.

Joystiq's review scores are based on a scale of whether the game in question is worth your time -- a five-star being a definitive "yes," and a one-star being a definitive "no." Read here for more information on our ratings guidelines.
In this article: crystal-dynamics, microsoft, pc, playstation, ps3, square-enix, tomb-raider-2011, tomb-raider-2012, tomb-raider-2013, xbox
All products recommended by Engadget are selected by our editorial team, independent of our parent company. Some of our stories include affiliate links. If you buy something through one of these links, we may earn an affiliate commission.