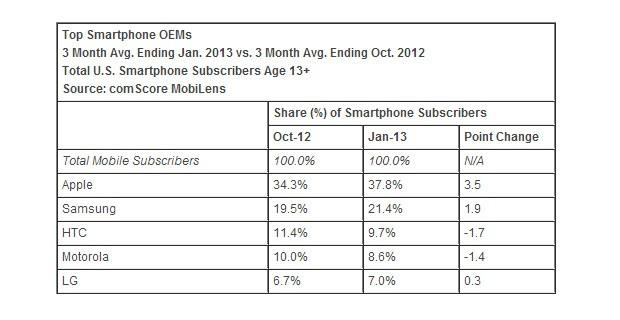 The latest numbers from ComScore show Apple strengthening its lead as the top US handset maker, with the iPhone nabbing an estimated 37.8 percent of the market as of January 2013. That's a 3.5-point boost from October of last year, putting healthy distance between Cupertino and the number-two smartphone maker, Samsung. That's not to say the Korean giant hasn't grown as well; its estimated 21.4-percent slice of the pie is up a more modest 1.9 points.

Apple's growth on the hardware front naturally has implications on the software side, and indeed this is the first time Android took a hit while iOS grew. According to the survey, Google's OS still maintains a healthy 52.3 percent compared to Apple's 37.8, but it's down 1.3 points while iOS saw a small boost. Where does that leave BlackBerry, Windows Phone and the rest of the gang? Pretty far behind -- as you can see for yourself in the chart below the break.

In this article: apple, comscore, market share, MarketShare, mobilepostcross, samsung
All products recommended by Engadget are selected by our editorial team, independent of our parent company. Some of our stories include affiliate links. If you buy something through one of these links, we may earn an affiliate commission.