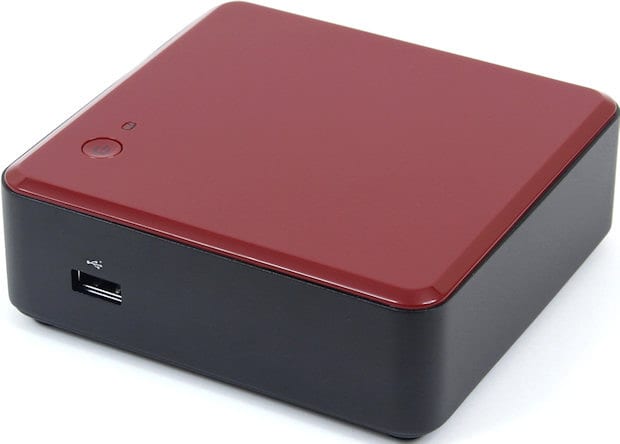 The name says it all. Late last year, Intel quietly introduced the Next Unit of Computing (NUC): a miniature, barebones desktop PC that represents a modern take on the traditional beige box. The NUC sits a mere two inches tall and comes nestled within a 4-inch square chassis. It also retails for just shy of $300. Don't let its diminutive size or price fool you, though. The Core i3 system is speedy, stable and more than capable of handling day-to-day computing tasks. Yes, it's a hell of a departure from the noisy monstrosities we lusted after just a few years ago. And it's a lot quieter, too.

Before you get too excited, though, let's temper that enthusiasm just a bit. As with any bare-bones kit, you'll need to install your own memory, storage, wireless networking components and operating system. In other words, unless you're willing to get your hands a bit dirty, the NUC isn't for you. And then there's the question of its price, which becomes a lot less tempting once you factor in the laundry list of necessary components. So, is the NUC deserving of its "Next Unit of Computing" title? Let's explore this question together. The NUC's small size, reasonable price and solid performance make it an ideal PC for tinkerers on a budget. Just be prepared to roll up your sleeves in setting it up.

How would you rate the Next Unit of Computing?
We want to hear what you think. Post a quick review now to join the conversation!
Write a review

If you've ever longed for a computer that kicked legacy technologies and power-hungry components to the curb, the Intel NUC will come as an incredibly refreshing piece of hardware. It's a minimalist contraption that includes only the bare essentials needed in a modern desktop computer. We're talking SSD storage, integrated graphics, HDMI video and just a smattering of ports -- more on that in a minute. Given the NUC's small enclosure, it can even be mounted to the back of a monitor or television with an included VESA bracket. The entire system is powered by an external 65W adapter, but curiously, the kit doesn't include a power cable. You heard that right... you'll need to add a cloverleaf-style cord to your shopping list; otherwise you'll be out of luck when it comes time to fire up the computer. Seems a bit Scrooge-like, if you ask us.

The Intel NUC is based on the company's third-generation of Core i3 processors. That is to say, we're looking at an Ivy Bridge setup. The dual-core 1.8GHz processor (i3-3217U) is of the low-power variety that you'd typically find in laptops and comes soldered to the motherboard. Naturally, Intel HD 4000 graphics is part of the mix, and is integrated into the CPU itself. Expansion is limited to a pair of DDR3 SO-DIMM slots (16GB max), one full-size mini PCIe slot that supports mSATA SSD drives and one half-size mini PCIe slot that's perfect for WiFi and Bluetooth. Thankfully, wireless antennas come pre-installed in the NUC.

Despite the NUC's modern internals, its naming scheme is as archaic as it gets. The Core i3 system comes in two varieties: the DC3217BY and the DC3217IYE. Needless to say, if Intel wants to get serious about the NUC, it'll need to put friendlier names at the top of the to-do list. Fortunately, we can do a better job. On one hand, you have the NUC Thunderbolt, which combines a single HDMI port and one Thunderbolt port that can be used to drive a secondary display (up to 2,560 x 1,440). Alternately, the NUC Ethernet provides two HDMI ports and, you guessed it, a gigabit Ethernet port. Both systems offer three USB 2.0 ports (two on the rear, one up front), and a Kensington lock port. Since the system lacks dedicated audio output, you'll need to ensure that your monitor features built-in speakers. If you find yourself needing other ports, such as USB 3.0, Firewire and the like, you can always snag a port replicator such as the Thunderbolt Express.

While you're probably more interested in connectivity than colors, it's worth mentioning that the NUC Thunderbolt features a red top panel that's made of plastic, whereas the NUC Ethernet sports a black top panel that's fashioned out of aluminum. Regardless of version, both NUC models are plain, plasticky affairs that place function ahead of aesthetics. It wouldn't surprise us to see Intel put a bit more effort into the NUC's industrial design in subsequent iterations, but it's clear that the current generation is geared toward the hobbyists that are more interested in the system's inner beauty.

Speaking of inner beauty, if the NUC appeals to you, then prepare to fall in love. Not only is the motherboard an engineering marvel, but the system is also so easy to build that you might just get a bit misty-eyed after it's all said and done. In our experience, the entire process took under 10 minutes, which included a generous amount of time merely admiring Intel's handiwork.

Put simply, so long as you're comfortable installing RAM, you'll have no trouble building a complete system from the NUC. To install the wireless module, you'll merely attach the pre-routed pigtail antennas, place the card in the lower mini PCIe slot and screw it down. Then rinse and repeat for the SSD, which is situated above the wireless card and secured onto a standoff on the motherboard. After that, snap in two sticks of RAM and replace the bottom cover, which is secured by four screws. It's frighteningly effortless, and it sure beats the mess of cables that you'd be forced to deal with in a typical desktop setup.

Naturally, the components that you select will play into the NUC's overall performance and final price. We chose to configure ours with 8GB of Crucial DDR3 RAM, a 32GB Crucial m4 mSATA SSD and an Intel Centrino Advanced-N 6235 wireless card, which provides both WiFi and Bluetooth 4.0. If you're looking to run Windows 8, keep in mind that you'll really need a minimum of 64GB storage -- simply because the OS is a glutton for space. Speaking of Windows, it's a relatively big-ticket item that adds another $100 to the cost of a fully furnished NUC. Needless to say, you can also swing for a free Linux distribution and spare the expense. To give you a better idea of what a completed NUC will set you back, we've compiled a theoretical shopping list from NewEgg.

Once properly outfitted, it's easy to see that the NUC isn't a budget computer. Not that it deserves to be positioned as one, but it's important to lose any rose-colored visions of its $300 price tag. At the minimum, you can plan on its price effectively doubling, and even then, you'll need to chase down a keyboard, mouse and display.

Lastly in the setup process, you'll need to snag the OS of your choice and then load it onto the NUC. Since the machine lacks an optical media drive, this final step is a bit more labor-intensive than your typical PC build, but it's manageable nonetheless. Assuming you don't have an external DVD reader handy, your best bet is to install an OS via a USB drive. If you're looking to install Windows, you'll need to grab a utility from Microsoft known as the Windows 7 USB/DVD Download Tool. Despite its name, the software also works for Windows 8, and is needed to create a bootable flash drive from an ISO file of the Windows install disc.

The NUC is, without a doubt, a snappy little devil. Granted, we regularly test laptops that are more powerful, and the system's integrated HD 4000 isn't ideal for gamers (delivering 14 fps at 1080p in Euro Truck Simulator 2, for instance), but when it comes to running Windows 8 and day-to-day computing tasks, the NUC's an absolute pleasure. Applications are always quick to launch, fullscreen 1080p video plays effortlessly and web browsing is wonderfully smooth. Given our components, the NUC was able to bring up the Start Screen from a cold boot in approximately 11 seconds, which is common among systems with SSD storage, but comes as a breath of fresh air nonetheless.

While the NUC did get a bit warm during our benchmark tests, it was only under these conditions that the fan noise rose above ambient level. The system is otherwise wonderfully quiet, and even when playing 1080p video, you'll need to place your ear within inches of the system to hear the fan -- and yes, this holds true even with the sound muted.

Perhaps you've been eyeing the NUC as a secondary computer. Say, in the living room? The NUC's small size, low noise levels and ability to effortlessly process 1080p video suggest it might be an ideal HTPC, but the system still has a few limitations. First, SSD storage remains fairly expensive and limited in capacity, which means that you'll need to access your personal content either over a network or from an external hard drive. The NUC's lack of expandability also comes into play, eliminating the possibility of adding a TV tuner card. Naturally, you could always snag an external unit, but once you begin adding other devices to the mix, the computer's small size begins to lose its appeal. The system also lacks niceties such as IR capabilities and dedicated audio output, which would provide extra utility in the living room. On the upside, the NUC is a fantastic system for playing emulator-based games on the big screen.

Later this year, we can look forward to Intel's release of chips based on the Haswell microarchitecture. While we're expecting to see a slight bump in speed for the CPU, the fourth generation of Core processors will bring a sizable performance boost to the integrated graphics chipset. No release date has yet been made official for Haswell, but it'd be entirely logical for Intel to update the NUC as part of its refresh. With that in mind, if you're currently on the fence about the NUC, it could very well be an update worth waiting for.

Now, it's time to address the question that we put out there at the very beginning of this review: is the NUC really deserving of its "Next Unit of Computing" title? Absolutely. The NUC stands as proof that traditional, mid-tower PCs deserve to go by the wayside for the average consumer. The system is speedy, small, power-efficient and quiet. It strips away years of legacy cruft and provides only the essentials that most users need to be productive and have a rewarding computing experience. Sure, the ultramodern approach may be unsettling to some, but we saw similar hesitation when the floppy drive and optical drive were cast aside, and these upheavals are certain to continue. So long as you're willing to accept the inherent tradeoffs of such a minimalistic computer, the NUC provides excellent incentive to roll up your sleeves and build your next PC.

In this article: corei3, diy, intel, NextUnitOfComputing, nuc, pc, review
All products recommended by Engadget are selected by our editorial team, independent of our parent company. Some of our stories include affiliate links. If you buy something through one of these links, we may earn an affiliate commission.