A viral VR sex suit and what it says about us 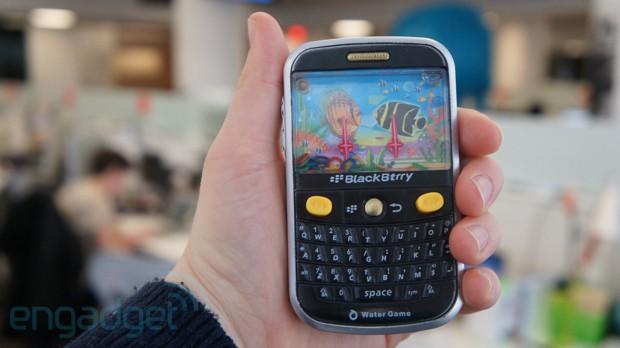 This has been a year of fundamental changes for BlackBerry; shifts in the company's core, beginning with a change in name from Research in Motion to the far less cumbersome -- and more familiar -- BlackBerry. The change to BlackBerry also brought the introduction of BB 10, a more advanced and modern operating system that aims to put the smartphone pioneer on an equal footing with the likes of iOS and Android, OSes that have robbed it of a good deal of market share with BlackBerry's efforts apparently focused elsewhere.

The Z10, the first handset to take advantage of the new operating system, has earned decent to good reviews, though reviewers and consumers alike seem intent on holding out for its counterpart, the Q10, which harnesses that core competency that has helped the company maintain so many loyal users: the QWERTY keyboard. And then there's this, the BlackBtrry Water Game (pronounced, we assume, "BlackBattery"), a strange, typoed beast, which may mark yet another fundamental shift for the smartphone market as we know it.

On its face, the device shares a lot more with BlackBerry's past than its future, with a build that's clearly a spiritual successor to the company's Bold line. The handset has an all-black front, with a display that occupies most of its upper third. Just above that is a gold speaker grille and below, the familiar trackball for navigating through all of those work emails with ease. A physical keyboard monopolizes the bottom of the handset -- though this, like the trackball and speaker grille above it, seems to exist primarily for aesthetic purposes. It refuses to react, no matter how hard one pushes, making us long for the simplicity of the virtual keyboard, which, while not offering any tactile feedback, actually, you know, does something.

It's a bit subtle to the untrained eye, but BlackBerry diehards may well notice the presence of two large, orange buttons on either side of the trackball that jut out a few millimeters. The buttons each feature a pair of arrows and, perhaps most notably, can actually be pressed, offering a unique bit of functionality that could help distinguish this device from its rivals in an increasingly competitive smartphone market.

Around the side of the device, you'll find a wide silver trim, with two indeterminate buttons of different sizes on the left side. Again, this pair seems to exist for purely aesthetic purposes -- if you're the button-pushing type, this is arguably the most infuriating device money can buy -- but it may well help cure you of that BlackBerry thumb that had you on worker's comp for much of the early '00s. The rear of the device has a nice texture to it, ensuring a good grip. There's a rear-facing camera at the top, which likely won't get much use seeing as how it appears to be painted over -- though it may offer a cool filtered effect as the rest of the world waits for BlackBerry to jump on the Instagram bandwagon. Below this is the familiar BlackBerry four-B logo and to its right is the rubber drain.

Software-wise, the Water Game has a ways to go before catching up with the competition. The display is sharp and the UI is slick, but like BB 10, the app selection is fairly limited. In fact, best as we can tell, there's only one game in the app library, which involves using the aforementioned big orange buttons to push streams of water upward in order to get a number of colored rings onto two shiny red swords. All of this occurs in front of a seemingly unrelated tropical fish background. It's a simple game, sure, but with casual gaming all the rage on mobile devices, it's easy to see this becoming the next Fruit Ninja.

The BlackBtrry Water Game's got a ways to go if it's going to truly compete in this cutthroat smartphone space. For one thing, the company's going to have to offer some serious incentives to developers to help build out its app offerings. It's also going to have to make sure that more than two buttons are operational, moving ahead -- even as the industry has moved toward virtual everything, consumers are still accustomed to having the physical buttons on their devices work. The device does have innovation going for it, trading in the LCD for an always-on (as the "BlackBattery" name implies) fully liquid display -- and that may well be worth the $2 asking price alone.

In this article: april fools, AprilFools, blackberry, BlackBtrry, hands-on
All products recommended by Engadget are selected by our editorial team, independent of our parent company. Some of our stories include affiliate links. If you buy something through one of these links, we may earn an affiliate commission.