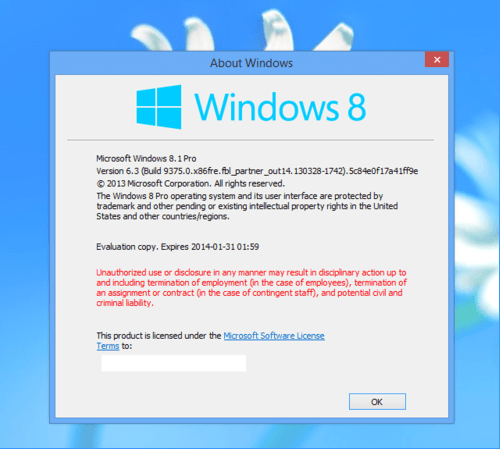 It's a world of code names out there, and final products rarely ever inherit the name given to them during the development process. It appears that Microsoft doesn't plan to buck the trend with the client version of Windows Blue, an OS refresh that Mary Jo Foley says is destined to become Windows 8.1. The screenshot you see above of Build 9375 was leaked on WinForum.eu and Foley has confirmed it with her sources; apparently Blue is poised to be kept under the Windows 8 umbrella instead of Win9, so the 8.x naming scheme would fit. Additionally, her sources have indicated that the Blue update for RT will simply be known as Windows RT 8.1. While we wait for official word from Microsoft, check out our screenshot tour of a recently leaked build of the update -- after all, its functionality is a bit more important than whatever it gets named.

In this article: microsoft, win8, windows, Windows8.1, WindowsBlue
All products recommended by Engadget are selected by our editorial team, independent of our parent company. Some of our stories include affiliate links. If you buy something through one of these links, we may earn an affiliate commission.