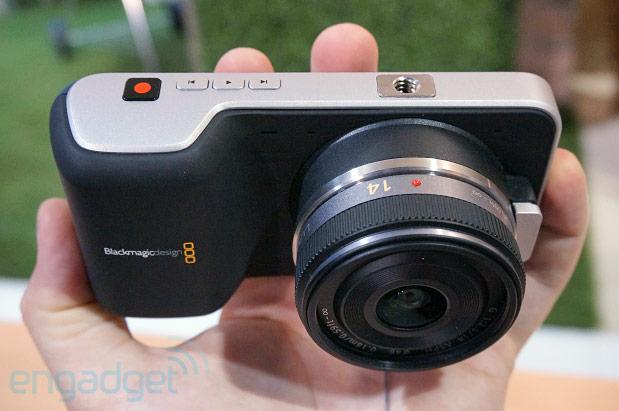 A sub-$1,000 price tag makes any product a relative steal on the floor of NAB -- impressive specs and industry standard compatibility are just icing on the cake. If such figures are any indication, however, Blackmagic's new Pocket Cinema Camera, which leaked earlier today and ships in July, is potentially a very solid buy at $995, with a Super-16 Cinema 1080HD sensor with 13 stops of dynamic range, CinemaDNG RAW recording, SD card storage, Micro HDMI monitoring and a Micro Four Thirds lens mount. We got an early look at the shooter on the showroom floor, and the compact size is truly striking -- the body is comparable in size to any other mirrorless camera, though it definitely pushes the limits of what we'd consider pocketable. The design is very similar to Blackmagic's larger Cinema Camera launched at last year's NAB, with the same Micro Four Thirds lens mount. There's a very sharp built-in matte LCD for viewing footage and adjusting settings, and the build is quite solid -- it's significantly heavier than you'd expect.

Naturally, the camera isn't as capable as Blackmagic's pricier NAB model, the Production Camera 4K, which also made its debut today and ships in July. With that flavor, $3,995 buys you a Super 35 sensor with native Ultra HD and 4K support, a built-in SSD recorder, compressed CinemaDNG RAW and compatibility with EF lenses. We spent a few minutes with that model as well, and were equally impressed. The screen was very bright, sharp and not at all reflective, and the camera includes your standard array of inputs and outputs, including dual mic jacks, an SDI port, power and control. Both models are very competitively priced, as you might expect from Blackmagic, and with this wide range of appeal, there's now a little something for everyone. Be sure to head past the break to check out our hands-on video as we take a closer look at both models.

Update: B&H Photo now has both cameras up for pre-order with an expected availability of July 25th. Bearing in mind previous delays for BlackMagic Design's past model, you can place your order at the More Coverage links below.

In this article: 4k, blackmagic, camera, hands-on, mft, microfourthirds, nab, nab2013, video
All products recommended by Engadget are selected by our editorial team, independent of our parent company. Some of our stories include affiliate links. If you buy something through one of these links, we may earn an affiliate commission.