HTC One for AT&T and Sprint: what's different?

You'd think after publishing a 6,000-word review, two hands-on posts and a camera explainer, we would have said all there is to say about the HTC One. Not quite. Though the phone has been available in Germany for about a month now, it's only just arriving in other markets. The US version in particular will see simultaneous launches on AT&T and Sprint, and T-Mobile soon to follow. The AT&T and Sprint variants will be available on April 19th, though you can pre-order either for $200 with a two-year contract. By the by, while all three US carriers will offer a 32GB version, AT&T is also selling a $300 model with 64 gigs of built-in storage -- a useful spec, given that the phone has no microSD slot.

We've just finished taking the AT&T / Sprint models for a spin and, as you'd expect, we like them just as much as the global model. If you're seriously considering getting one, we'd still refer you to our original review for an in-depth take on the design, camera performance and Sense 5 skin. When you're done, though, you might want also to meet us after the break: we've got benchmark scores, network speeds, battery life results and bloatware alerts that apply specifically to those US versions.%Gallery-184935% 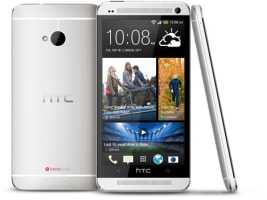 In contrast to the One X, which received a drastic makeover before launching on Sprint, this year's One has barely suffered any modifications at the hands of carriers. On Sprint, the One is exactly the same as the global model we reviewed last month. There isn't a single bit of carrier branding anywhere on the device, an approach Sprint has been taking with other phones, too. In fact, we could have easily reused the hardware gallery from our original review, and our readers would have been just as well served. The AT&T variant does manage to squeeze in the little globe logo on the back side, just above where it says "Beats Audio," but that's it.

Otherwise, this is thankfully the same stunning piece of hardware we slavered over in our original review: all-aluminum, save for some polycarbonate accents on the rear and around the edges. As a sub-5-inch device (small potatoes, these days), it's compact enough that even people with petite hands should be able to handle it, but the 9.5mm-thick chassis, rounded back and chamfered edges make it especially easy to grip.

But let's not forget the thing that's already made the HTC One instantly recognizable: that 4.7-inch S-LCD3 screen, with a Gorilla Glass 2 panel that stretches neatly from one end of the device to the other, leaving nothing but a skinny chamfer on either side. As we said in our earlier review, the display is about as gorgeous as 1080p displays get these days; it's easy to read in direct sunlight, and it's even a bit sharper than the screen on the Droid DNA, another recent flagship from HTC. Of course, these differences are only really obvious to those of us who have an assortment of 1080p handsets lying around -- an unlikely scenario for most of you at this point.

For those of you just getting around to cross-shopping the HTC One against other devices, we'll give you a lightning tour of the handset. On board, you've got a standard micro-USB / MHL port along the bottom edge, as well as a metal volume rocker on the right side, and a micro-SIM tray on the left. Of note, the Sprint One is among the first of the carrier's LTE devices to offer a replaceable SIM. Up top, you'll find your requisite headphone jack and power / lock button, which doubles as an IR blaster. Meanwhile the back side is home to a 4MP UltraPixel camera with flash. Moving back to the front side, you'll find the 2.1-megapixel, front-facing camera, as well as an LED notification light, tucked under the top speaker grille, just above the screen.

Though US versions of flagship phones sometimes ship with different innards than their global counterparts, that's simply not the case here. The Sprint and AT&T models we tested had the exact same specs as the unlocked international model, including a 1.7GHz quad-core Snapdragon 600 processor, an Adreno 320 GPU and 2GB of RAM. The only spec you'll need to take into consideration is internal storage: though AT&T, Sprint and T-Mobile will all be offering a 32GB version, AT&T will also be selling a 64GB model -- a variant exclusive to the carrier for an unknown time period. Something to keep in mind if you're not wed to any particular carrier.

As you'd expect, all three of the HTC Ones we've tested so far (the global, Sprint and AT&T models) deliver similar scores in most benchmarks: they came within 100 points of each other in Quadrant and Vellamo, and notched the same score in GLBenchmark. The two US models trail the global One slightly in both AnTuTu and CF-Bench, with AT&T clinching second place and Sprint settling for the bronze. Even then, though -- and this is important -- the software on our Sprint device was not final, so it's conceivable that, with a little more firmware tweaking, we could see that gap narrow.

One of the reasons Engadget runs separate mini-reviews for US versions of phones is that while the overall design and camera performance might remain the same, battery life can often vary from one network to another. Indeed, we noticed some slight differences after putting the US models through their paces. While the 2,300mAh battery in the global model lasted six and a half hours in our usual rundown test (video looping, brightness fixed at 50 percent, etc.), our AT&T review unit lasted an average of seven hours and 29 minutes, besting the global model by about an hour. As for real-world use, the AT&T model carried on like a champ, lasting through a full day of maps use, podcasts, photo-taking, Facebook, Twitter, app downloads and speed tests. Even after eight hours, we still had about half a charge left. On the Sprint model, meanwhile, we achieved similar runtime of seven hours and five minutes in the same standardized rundown test.

As for 4G speeds, we tested the One on AT&T's LTE network in San Francisco, and Sprint's 3G / 4G spectrum in New York City. As you might know, Sprint's nascent LTE network hasn't achieved widespread coverage yet, though cell sites are active in a select few cities, including NYC. In fact, we had no problem getting a 4G signal, even in an outer borough like Brooklyn. (All bets were off when we went indoors, though.) When we were able to find LTE, we saw average download speeds of 15.52 Mbps, and average up-rates of 7.79 Mbps, with outlying scores of 7.02 to 25.66 Mbps down and 4.78 to 9.19 up. As you can see, our download rates were a good deal less consistent, although those results in the 20-something range weren't exactly flukes, either: we were on a hot streak of download rates above 25 Mbps before finally coming back down to earth.

Download speeds were quite a bit faster on AT&T, whose LTE service has been up and running for some time now, though the upload rates consistently matched what we saw on Sprint's new network. At the slower end of the spectrum (this was in San Francisco's Excelsior district), we recorded average download speeds of 17.14 Mbps down, with uploads leveling out around 5.07 Mbps. That matches our overall average for Sprint, but again, Excelsior was one of the more poorly covered neighborhoods we tested. In downtown San Francisco, meanwhile, we managed 23.59 Mbps down and 8.29 Mbps up, and those numbers skyrocketed once we wandered over to The Mission. There, the phone achieved 46.26 Mbps down, along with upload rates of 8.10 Mbps up (similar to what we saw elsewhere in the area).

Given how in-your-face HTC's new Sense 5 UI is, we feel a bit silly kvetching about something as unobtrusive as carrier bloatware.

Given how in-your-face HTC's new Sense 5 UI is (its BlinkFeed home page manages to be reminiscent of Flipboard, Blur and Windows Phone), we feel a bit silly kvetching about something as unobtrusive as carrier bloatware. That said, we know it's a pet peeve for many of you, and it's one of the few things distinguishing these models from the unlocked version we reviewed last month. Thankfully, neither carrier does too much damage. Sprint pre-installs Sprint Zone, Sprint TV & Movies, Sprint Music Plus and Sprint Worldwide for coverage overseas. All of these can be uninstalled. Perhaps most intrusive of all is the "Discover It" widget, which shows you a curated selection of apps in different categories, but even that can be removed with a simple long-press.

In either case, you won't find too many apps that aren't either carrier bloatware or part of the native Android experience. These include Lookout Security and Scout on Sprint, and Amazon Kindle on AT&T. Both carriers pre-load TuneIn Radio and SoundHound as well.

It looks like the global HTC One, and performs like it too. Regardless of whether you're loyal to Ma Bell or the Now Network, you can expect the same high-end design and fast performance, though battery life seems to vary modestly depending on the carrier. If it were us shopping, we'd sooner buy this on AT&T, as its LTE network is more fleshed-out, and you can get a beefier 64GB model, to boot. Additionally, in areas without LTE coverage, defaulting to AT&T's HSPA+ is still a better option than Sprint's EVDO network. Even if you're not planning on switching carriers, though, the One is the best phone you can get right now on either network.

Update: After testing a final, production-grade version of the Sprint model, we've updated our review with conclusive battery life results. It lasted seven hours and five minutes in our standard rundown test, similar to both the AT&T and global versions.

Nicole Lee contributed to this review.