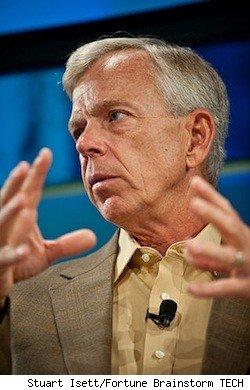 Tuesday at the National Association of Broadcasters (NAB) conference in Las Vegas, Verizon CEO Lowell McAdam spent some time touting his company's investment in its LTE network and the fact that 4G LTE makes it possible to stream video. McAdam also relayed a story, recounted on Fierce Wireless, about how he was able to convince Apple founder and CEO Steve Jobs to build LTE into the iPhone 5

To quote from the article:

McAdam was trying to convince Jobs to make the iPhone 5 compatible with LTE. "I was really trying to sell him and he sat there without any reaction. Finally, he said, 'Enough. You had me at 10 Mbps. I know you can stream video at 10 Mbps.' And Apple's next phone was LTE," McAdam said.

Part of the reason for McAdam's appearance at NAB was to allay the fears of broadcasters who are concerned about Verizon's plan to use LTE Broadcast technology to broadcast the 2014 Super Bowl and similar live events to its customers. McAdam reassured the crowd, saying "We don't want to get in the way of broadcasters," but noted that there are some events where Verizon could "add a dimension and it becomes better."

In this article: Apple, iPhone, IPhone 5, Lowell McAdam, LowellMcadam, LTE, lte broadcast, LteBroadcast, National Association of Broadcasters, Steve Jobs, Verizon Communications Inc, verizon wireless, VerizonWireless
All products recommended by Engadget are selected by our editorial team, independent of our parent company. Some of our stories include affiliate links. If you buy something through one of these links, we may earn an affiliate commission.