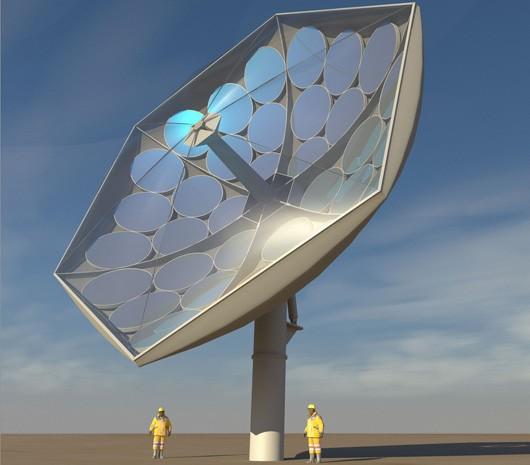 Modern solar collectors can concentrate only so much energy for safety's sake: too much in one place and they risk cooking themselves. An IBM-led group is working on a new collector dish that could avoid that damage while taking a big step forward in solar power efficiency. The hundreds of photovoltaic chips gathering energy at the center will be cooled by the same sort of microchannel water cooling that kept Aquasar from frying, letting each chip safely concentrate 2,000 times the solar energy it would normally face. The collector also promises to do more with sunlight once it's trapped: since the microchannels should absorb more than half of the waste heat, their hot water byproduct can either be filtered into drinkable water or converted into air conditioning.

As you might imagine, IBM sees more than just the obvious environmental benefit. When a receiver will generate about 25kW of energy while costing less to make through cheaper mirrors and structures, a fully developed solar array could be an affordable replacement for coal power that delivers greater independence -- picture remote towns that need a fresh water supply. IBM doesn't estimate when we'll see production of these collectors beyond several prototypes, but the finished work will likely be welcome to anyone frustrated by the scalability of current solar energy.

Made in IBM Labs: Collaboration Aims to Harness the Energy of 2,000 Suns

ZURICH, 22 April 2013: Today on Earth Day, scientists have announced a collaboration to develop an affordable photovoltaic system capable of concentrating, on average, the power of 2,000 suns, with an efficiency that can collect 80 percent of the incoming radiation and convert it to useful energy. The proposed system can be built anywhere sustainable energy, drinkable water and cool air are in short supply at a cost of three times lower than comparable systems.

A three-year, $2.4 million (2.25 million CHF) grant from the Swiss Commission for Technology and Innovation has been awarded to scientists at IBM Research; Airlight Energy, a supplier of solar power technology; ETH Zurich (Professorship of Renewable Energy Carriers) and Interstate University of Applied Sciences Buchs NTB (Institute for Micro- and Nanotechnology MNT) to research and develop an economical High Concentration PhotoVoltaic Thermal (HCPVT) system.

Based on a study by the European Solar Thermal Electricity Association and Greenpeace International it would take only two percent of the Sahara Desert's land area to supply the world's electricity needs*. Unfortunately, current solar technologies on the market today are too expensive and slow to produce, require rare Earth minerals and lack the efﬁciency to make such massive installations practical.

The prototype HCPVT system uses a large parabolic dish, made from a multitude of mirror facets, which is attached to a tracking system that determines the best angle based on the position of the sun. Once aligned, the sun's rays reﬂect off the mirror onto several microchannel-liquid cooled receivers with triple junction photovoltaic chips -- each 1x1 centimeter chip can convert 200-250 watts, on average, over a typical eight hour day in a sunny region.

The entire receiver combines hundreds of chips and provides 25 kilowatts of electrical power. The photovoltaic chips are mounted on microstructured layers that pipe liquid coolants within a few tens of micrometers off the chip to absorb the heat and draw it away 10 times more effective than with passive air cooling.

The coolant maintains the chips almost at the same temperature for a solar concentration of 2,000 times and can keep them at safe temperatures up to a solar concentration of 5,000 times. The direct cooling solution with very small pumping power is inspired by the hierarchical branched blood supply system of the human body and has been already tested by IBM scientists in high performance computers, including Aquasar.

"We plan to use triple-junction photovoltaic cells on a microchannel cooled module which can directly convert more than 30 percent of collected solar radiation into electrical energy and allow for the efﬁcient recovery of waste heat above 50 percent," said Bruno Michel, manager, advanced thermal packaging at IBM Research. "We believe that we can achieve this with a very practical design that is made of innovative concrete trackers, primary optics composed of inexpensive pneumatic mirrors and structures made of concrete -- it's frugal innovation, but builds on decades of experience in lightweight and high strength concrete elements used for building bridges."

An initial demonstrator of the multi-chip receiver was developed in a previous collaboration between IBM and the Egypt Nanotechnology Research Center.

"The design of the system is elegantly simple." said Andrea Pedretti, CTO of Airlight Energy. "We replace expensive steel and glass with low cost concrete and simple pressurized metalized foils. The small high-tech components, in particular the microchannel coolers and the molds, can be manufactured in Switzerland with the remaining construction and assembly done in the region of the installation. This leads to a win-win situation where the system is cost competitive and jobs are created in both regions."

The solar concentrating optics will be developed by ETH Zurich. "Advanced ray-tracing numerical techniques will be applied to optimize the design of the optical conﬁguration and reach uniform solar ﬂuxes exceeding 2,000 suns at the surface of the photovoltaic cell," said Aldo Steinfeld, Professor at ETH Zurich.

With such a high concentration and a radically low cost design scientists believe they can achieve a cost per aperture area below $250 per square meter, which is three times lower than comparable systems. The levelized cost of energy will be less than 10 cents per kilowatt hour (KWh). For comparison feed in tariffs for electrical energy in Germany are currently still larger than 25 cents per KWh and production cost at coal power stations are around 5-10 cents per KWh.

Current concentration photovoltaic systems only collect electrical energy and then dissipate the thermal energy to the atmosphere. With the HCPVT packaging approach scientists can both eliminate the overheating problems of solar chips while also repurposing the energy for thermal water desalination and cool air.

To provide fresh water IBM scientists and engineers are utilizing a world leading technology they developed for water-cooled supercomputers. With both the Aquasar and SuperMUC supercomputers water is used to absorb heat from the processor chips, which is then used to provide space heating for the facilities.

"Microtechnology as known from computer chip manufacturing is key to enable such an efﬁcient thermal transfer from the photovoltaic chip over to the cooling liquid" explains André Bernard, head of the MNT institute at NTB Buchs. "And by using innovative ways to fabricate these heat transfer devices we aim at a cost-efﬁcient production."

In the HCPVT system, instead of heating a building, the 90 degree Celsius water will pass through a porous membrane distillation system where it is then vaporized and desalinated. Such a system could provide 30-40 liters of drinkable water per square meter of receiver area per day, while still generating electricity with a more than 25 percent yield or two kilowatts hours per day. That is a little less than half the amount of water the average person needs per day according to the United Nations**, but a large installation could provide enough water for a small town.

Remarkably, the HCPVT system can also provide air conditioning by means of a thermal driven adsorption chiller. An adsorption chiller is a device that converts heat into cooling via a thermal cycle applied to an absorber made from silica gel, for example. Adsorption chillers can replace compression chillers, which contain harmful working ﬂuids, with water eliminating any impact on the ozone layer.

Scientists envision the HCPVT system providing sustainable energy and fresh water to locations around the world including Southern Europe, Africa, Arabic peninsula, south west of north America, south America, and Australia. Remote tourism locations are also an interesting market, particularly resorts on small islands, such as the Maldives, Seychelles and Mauritius, since conventional systems require separate units that have to be integrated, with consequent loss in efﬁciency and increased cost.

A prototype of the HCPVT is currently being tested at the IBM Research lab in Zurich, Switzerland. Several prototypes of the HCPVT system will be built up in Biasca and Rüschlikon, Switzerland as part of this collaboration.

In this article: concentration, filtration, ibm, microchannel, photovoltaic, science, SolarCollector, solarpower, WaterCooling
All products recommended by Engadget are selected by our editorial team, independent of our parent company. Some of our stories include affiliate links. If you buy something through one of these links, we may earn an affiliate commission.