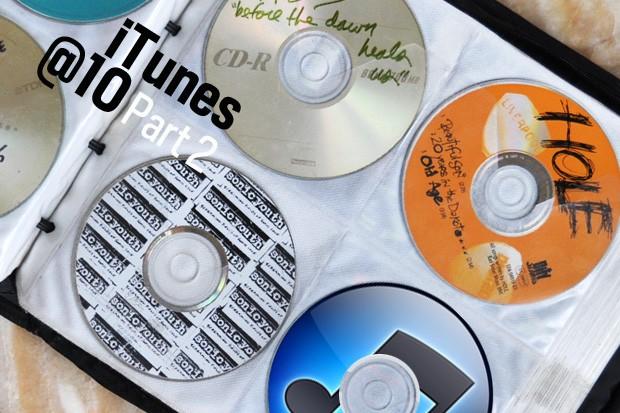 "I think the consumer is going to be driving this train for quite a long time."
-- Casey Rae, deputy director, Future of Music Coalition

In 2003, the iTunes Music Store established an environment for downloadable music at exactly the time when consumers needed a safe and stable online music store. iTunes sold a million songs in the first week, 10 million in five months and 25 million songs after eight months.

But the consumer demands of one era do not necessarily hold sway in a different cycle. iTunes is facing powerful competition from Amazon, Google and Microsoft in the pay-per-download business. Meanwhile, streaming platforms like Spotify, Rdio and YouTube are establishing a widespread attitude that music is free, and that downloading from a store isn't as compelling as accessing a service. Apple is still making plenty of sales in the music store (15,000 downloads per minute), but users are also flocking in different directions.

In the five years before iTunes opened, it was widely assumed that consumers were driven to Napster by greed for free music. The wounded war cry of the major labels that had lost control of their product was, "We can't compete with free!"

Everyone loves a free buffet. But freeloading is not necessarily the most obvious conclusion when it comes to file-sharing. This was especially true 15 years ago when Napster offered a new kind of music experience that many users would have been glad to pay for. P2P wasn't just a watering hole for broke college students; there was strong appeal for older demographics that had money for music and a history of buying it.

For many users, the most galvanizing appeal of Napster was not free music, but freed music.

For many users, the most galvanizing appeal of Napster was not free music, but freed music. Freed music is liberated from artificial lock-ups. The two chief lock-ups of the Napster years were back catalogs of out-of-print recordings, and individual tracks of CD albums. As Napster became widely used, its tremendous user-supplied inventory of songs, spanning decades, became normal and expected. Labels didn't accept the new normal quickly. They failed to adjust the packaging and availability of their recordings, and their resistance drove millions of users to clandestine P2P sites.

When locked-up music prevents people from finding what they want to buy, they find another way to get it. I saw this effect played out when I attended a high school reunion during Napster's heyday. The classmate in charge of music brought a long MP3 playlist of period songs scoured from Napster. Other options, like amassing a hundred songs from original vinyl borrowed from friends, or buying CD retrospectives filled with bad tracks, were not feasible. It was as if the industry was intentionally blocking payment for a specialized music collection. Today, of course, building a legal reunion playlist from any era would cost a few bucks for a subscription service, and could be brought to the event in a carry-on bag holding a smartphone and portable speakers.

What People Will Pay For

"You don't have many excuses anymore," Casey Rae, deputy director of the Future of Music Coalition told me. "For 10 dollars a month, you can have access to all the recorded music in the world, on the go, stored in a cache on your phone and synchronized. It's pretty amazing. That's a powerful consumer-focused music marketplace."

Rae's observation speaks to consumer expectations of sound tracking one's life at an extremely low cost. In addition to cheap music, people want tremendous variety (the long tail of unlocked music). Between the listening platforms and musician hangouts like SoundCloud, there is a consumer presumption that the entire library of recorded music should be accessible.

Customization is important to users who are deep into creating playlists. Not everyone is -- Pandora is popular because it effectively curates playlists for you. Spotify, by contrast, is an uncurated catalog of music through which the user is free to prowl, building lists and sharing them. In Spotify and Rdio, listening to music has become entwined with social sharing and lifecasting. Playing a song, for example, can trigger an automatic tweet. Another aspect of social streaming -- shared playlists -- is an effective music-discovery feature.

Mobile music has been important to consumers since the Sony Walkman. Some digital services charge for mobile as a premium service. Michael Robertson, founder of MP3.com and current CEO of DAR.fm, criticized the industry's separation of mobile and desktop services: "One of the big hurdles has been the industry's view that mobile is different than desktop. Spotify, Rdio, Xbox Music -- these have most every song in the modern library. On the PC, it's free with ads, but when it comes to mobile, you've got to get out your credit card. That has stunted access."

If there was a digital music manifesto for consumers in 2013, it would be: everything, cheap, customizable, everywhere. A full realization of these priorities would be what Jim Griffin, a former executive at Geffen Records and Warner Music, called "the just-in-time delivery of customized digits." If music is a liquefied stream of bits, the user should be able to shape its stream in any way.

Some People Will Never Pay for Music

"I hate to say it, but iTunes is a very elegant tip jar."

That's Griffin, pointing out that even now, 10 years into the iTunes era, any connected consumer can enjoy a world of music without paying a cent.

If music is a liquefied stream of bits, the user should be able to shape its stream in any way.

"It has been voluntary to pay for a while now -- I don't mean legally or morally, but practically," Griffin said. "You make a choice when you decide to pay for a song. That's simply the way it is. That choice becomes more attractive every year, roughly twice as attractive at half the price every year. Moore 's law drives this equation."

What stops people from paying for music (besides lack of cash)? I surveyed online forums and social media comments to find many shades of anti-payment sentiment, expressed in several common themes:

When Apple launched the iTunes Music Store, subscription services were already in motion. I subscribed to Rhapsody when it started in 2001 (and still do). I expected the model to catch on quickly. Was I ever wrong.

Ten years later, I am belatedly right. Streaming services like Pandora, Spotify and Rdio have evolved beyond early music-subscription efforts like Rhapsody. Furthermore, YouTube is increasingly a music powerhouse, used for discovery and general listening. Everyone I spoke to for this series mentioned YouTube.

"YouTube has every song and 37 versions of it," Robertson said. "My kids don't do Spotify, Rdio or Rhapsody. They live on YouTube."

With all these wide-open listening platforms, the definition of music ownership seems to be changing. We are leaning toward a world in which access is the new ownership.

"Whether ownership is even necessary is a deep question," Griffin told me. "It's psychological. Music has always been psychological."

In my personal psychology, the question is whether a service feels like ownership. I have subscribed to Rhapsody for 12 years. Although outright song purchases are available on the platform, I rarely buy anything. But I feel like I own millions of tracks; I can listen to them anytime, anywhere. It's similar to cable TV, but a heck of a lot cheaper and much more customizable.

We are leaning toward a world in which access is the new ownership.

"There are a lot of reasons why subscriptions didn't take off," Matt Graves, a former Rhapsody exec, told me. "It was a new model. Broadband was not available. WiFi was not widely available. You could not put music on a portable device. There were no smartphones. Nobody had apps. Also, the amount of music that is available now, millions of songs [is compelling] ... when Rhapsody was acquired by Real [in 2003], we had 320,000 songs available."

For years, subscription services like Rhapsody were scorned as "music rental" by outspoken critics. They had a point. If your subscription lapsed, you lost access and the money you had spent on it. You didn't wholly own music through subscription streaming services, but it felt like you owned it. Even so, the "celestial jukebox" concept (on-demand streaming of a huge catalog) was a hard sell to the broad market.

Unhinging the subscription piece did the trick. Cash-free, ad-supported music listening was the on-ramp that introduced the pleasure and convenience of the celestial jukebox to millions of new users. It's a new market component for the supply side, too -- the labels and musicians. The flocking of consumers onto new listening platforms encourages music creators to distribute their music on those platforms and enjoy wider exposure.

That might seem to be a win-win situation, and in some ways it is. At the same time, the structure of the music industry has become corrugated in ways that create conundrums for musicians. Access to the market, and exposure to listeners, don't always equate to sustainable income.

"Ultimately, the consumers will get what they want," Robertson said. "They'll get any music they want, any time they want it, on any device."

The question is: Can musicians survive in this universe?

Part 3 of this series is posted here. See Part 1 here.

In this article: anniversary, apple, digital music, DigitalMusic, itunes, itunes store, ItunesStore, music, streaming
All products recommended by Engadget are selected by our editorial team, independent of our parent company. Some of our stories include affiliate links. If you buy something through one of these links, we may earn an affiliate commission.