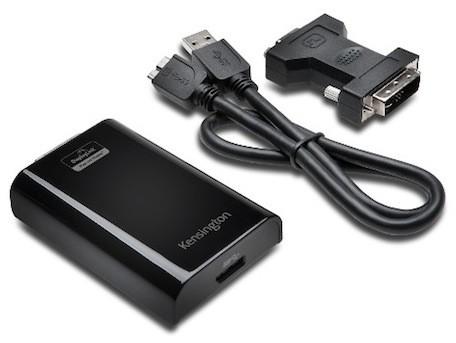 Have a need to attach more monitors to your USB 3.0-equipped Mac, but don't want to use a Thunderbolt, Mini DisplayPort, or HDMI port? Kensington may have just the thing for you -- the Universal Multi-Display Adapter (US$79.99 MSRP), AKA the USB 3.0 Multi-Display Adapter. We previewed this device last month, and now we've had some hands-on time.

Previously this device was available only for PCs, but new drivers available from DisplayLink make the adapter compatible with any Mac running OS X Snow Leopard, Lion, or Mountain Lion. Essentially what the adapter does is makes one of your USB 3.0 ports available to drive a monitor or projector. It's a small (2" x 3.5" x .68") black box with a SuperSpeed USB 3.0 input on one end and a female DVI connector on the other end.

That cabling arrangement is a little unfortunate. Many monitors are also equipped with a female DVI connector, so chances are you'll need to buy another adapter. LIkewise, the included DVI to VGA adapter is relatively useless -- although it plugs right into the Multi-Display Adapter, it has a female connector on the open end, once again requiring a male to male adapter cable to connect to many VGA ports.

Since the Mac software is relatively new, you need to download and install it prior to running the device. It takes up only about 16 MB of storage, and requires a reboot. After installing the software, I was able to find a male-to-male VGA cable, so I plugged one end into the 17-inch ViewSonic monitor I use with my MacBook Pro with Retina display, the other into the DVI to VGA adapter, and then plugged that into the Multi-Display Adapter. Next, the USB cable was plugged into the MacBook Pro, and the screen came right up at a resolution of 1920 x 1080 (also known as 1080p). The adapter will support resolutions on an external device of up to 2048 x 1152. As you'd expect, the Adapter is bus-powered and requires no external power.

I previously had some issues when testing a Mini DisplayPort to HDMI adapter when connecting a MacBook Air to a PC projector, so I thought I'd try the projector with this adapter (in most cases, I'll actually just use an HDMI cable to go straight from the MBP to the projector). Once again, the adapter worked like a champ, allowing me to drive the projector flawlessly from the MacBook Pro.

Considering the variety of video output modes that are available on most modern Macs -- HDMI, Thunderbolt, and Mini DisplayPort -- you might not need to have a USB 3.0-based adapter to add a monitor to your setup. However, it's nice to know that the option exists, and that the price tag on this adapter isn't too bad -- it was selling on Amazon today for $20 off the MSRP.

If you're looking for a way to hook up a DVI or VGA monitor to a Mac through USB 3.0, the Kensington Universal Multi-Display Adapter is a bus-powered alternative that may fit your needs.

Female out on both adapter and the DVI/VGA adapter is annoying; need to use a male by male cable (not included) to plug into most monitors and projectors

Anyone with a Mac with USB 3.0 who needs to keep other ports empty or in use with other devices but who wants to drive another monitor or projector

We're giving away our review device! Here are the rules for the giveaway:

In this article: accessories, display, features, hardware, kensington, kensington usb 3.0 multi-display adapter, KensingtonUsb3.0Multi-displayAdapter, Mac
All products recommended by Engadget are selected by our editorial team, independent of our parent company. Some of our stories include affiliate links. If you buy something through one of these links, we may earn an affiliate commission.