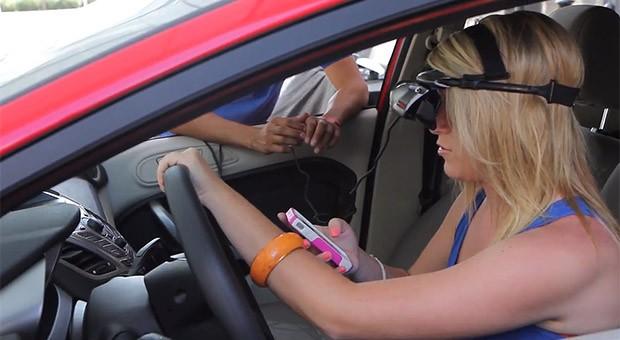 Tempted to just send a quick SMS saying you're on the road to grab the milk? Don't -- or your recipient could receive a much more dire message, says a consortium of carriers including AT&T, Sprint, Verizon and T-Mobile. Along with more than 200 other organizations including the DOT, NHTSA and NTSB, the carriers have joined AT&T's "It Can Wait" campaign, which began in March 2010. The message will feature prominently at carrier stores, Best Buy, Goodyear and RadioShack locations, while insurer USAA is bringing the texting-while-driving simulator we saw earlier (in the video after the break) to more locations. In addition, HTC, Pantech and Samsung will preload AT&T's DriveMode app (on select devices from the carrier) which impedes the practice, and you'll soon notice ads warning against it across social media and Clear Channel broadcasters. In case none of that drives the point home, remember that piloting a two-ton vehicle with any distractions is a ridiculously bad idea -- let alone one that takes your eyes completely off the road.

DALLAS, May 14, 2013 /PRNewswire/ -- AT&T's It Can Wait® campaign to end texting and driving was significantly bolstered today by the commitment of Verizon, Sprint, T-Mobile US, Inc. and more than 200 other organizations to join the movement. Their efforts will support a new national advertising campaign, a nationwide texting-while-driving simulator tour, retail presence in tens of thousands of stores, and outreach to millions of consumers with a special focus throughout the summer months between Memorial Day and Labor Day-known as the 100 Deadliest Days on the roads for teen drivers.1 The 2013 campaign drive will culminate on Sept. 19, when efforts turn towards encouraging everyone to get out in their community and advocate involvement on behalf of the movement.

"Texting while driving is a deadly habit that makes you 23 times more likely to be involved in a crash," said AT&T Chairman & CEO Randall Stephenson. "Awareness of the dangers of texting and driving has increased, but people are still doing it. With this expanded effort, we hope to change behavior. Together, we can help save lives."

"The It Can Wait campaign is a meaningful way for Verizon to continue its work on this important issue," said Verizon Wireless president and chief executive officer Dan Mead. "Texting and driving is a serious social challenge and we look forward to partnering with leading organizations and experts around the world to answer it."

"As a longstanding advocate of keeping wireless consumers focused on driving, Sprint is proud to participate in the 'It Can Wait' campaign," said Sprint CEO Dan Hesse. "Sprint will continue to promote education of responsible driving behavior through our sponsorship events, social media channels and thousands of retail stores nationwide."

"Mobile technology connects us in many cool ways, but adults and teens need to put it on hold while behind the wheel," said John Legere, president and CEO of T-Mobile US, Inc. "Knowing the risks is not enough. By simply putting the phone down, thousands of tragedies can be prevented every year. It's time to end texting while driving – for good."

The campaign kicks off May 20, with AT&T, Verizon, Sprint and T-Mobile bringing a multi-million dollar, co-branded advertising campaign to raise awareness of the dangers of texting and driving, and encouraging everyone to immediately take the pledge against it at www.itcanwait.com. The campaign will focus on the stories of people who are living with the consequences of texting while driving. Their stories will be told through various media including TV, radio, digital and social. The first story in the campaign will be of Xzavier Davis-Bilbo, who in 2010 at five-years-old, was struck while crossing the street by a young woman texting while driving-leaving him paralyzed from the waist down.

With prominent presence in AT&T, Verizon, Walmart, Sprint, T-Mobile, Best Buy and RadioShack stores, the It Can Wait message will be in tens of thousands of retail locations throughout the summer campaign period.

Also, government agencies including the U.S. Department of Transportation, National Highway Traffic Safety Administration and National Transportation Safety Board have all committed to help end distracted driving and support the efforts of It Can Wait and others who are working to raise awareness.

Throughout the campaign, It Can Wait advocates will take the message to their customers, employees and stakeholders in a variety of ways:

Clear Channel Media and Entertainment will share the It Can Wait message on more than 500 of its radio stations across the nation and plans to activate at the iHeartRadio Music Festival in Las Vegas – a two day, star-studded event that takes place in September.
DriveTime will feature It Can Wait messaging in communications to its employees and customers in their 100+ used car dealerships across the country.
Goodyear will incorporate the It Can Wait messaging into its high-resolution aerial sign on its three iconic blimps. The messaging will be displayed as the blimps travel the country and visit high-profile sporting events throughout the year.
Mobile device makers Pantech, HTC and Samsung are including the AT&T DriveMode® no-texting-while-driving mobile app preloaded on phones for AT&T customers.
Balfour is sharing It Can Wait messaging in class meetings with the goal of reaching one million students this school year.
The National Organizations for Youth Safety is engaging a minimum of 250 schools for Sept. 19 activities.
The City of Houston has launched an "It Can Wait, Houston" campaign to inform its citizens of the dangers of texting while driving.
The Texas Department of Transportation has included It Can Wait in its "Talk. Text. Crash." campaign and on digital highway signs.
SADD (Students Against Destructive Decisions) has created a speakers bureau in which youth devoted to ending texting while driving take the message to community events, school assemblies and media interviews to bring the issue to life through teen voices.

Social media have been major drivers of the It Can Wait movement, which has inspired more than 1.5 million personal commitments never to text and drive through pledges made at ItCanWait.com, on Facebook, through text-to-pledge and tweet-to-pledge, and at events. In the past year, more than 310 million unique user accounts have been reached through Facebook, Twitter and YouTube alone.

Beginning May 26 and continuing through the 100 Deadliest Days for Teen Drivers ending Sept. 3, It Can Wait advocates will contribute to a social media campaign delivering daily reasons why texting and driving can wait. The messages with pictures and personal accounts will be shared on Twitter, Facebook, Instagram, Pinterest and ItCanWait.com.

The highlight of the summer campaign will be a national day of action on Sept. 19. On that day, It Can Wait advocates will reach out in their communities to raise awareness of the risks of texting while driving, encourage everyone to make a personal commitment not to text and drive and recruit others to join the growing ranks of advocates dedicated to saving lives by ending texting while driving.

To take the pledge and see a list of supporters, visit www.ItCanWait.com. For additional information and resources, visit www.att.com/itcanwait.

In this article: att, SMS, sprint, t-mobile, Texting, TextingWhileDriving, verizon
All products recommended by Engadget are selected by our editorial team, independent of our parent company. Some of our stories include affiliate links. If you buy something through one of these links, we may earn an affiliate commission.