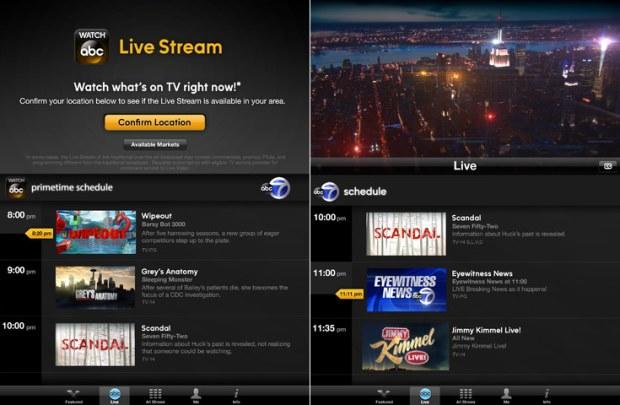 Just as it revealed in an interview this weekend after months of rumors, the Disney / ABC Television Group has launched Watch ABC as an "open access preview" for New York and Philadelphia residents. Available on the web and as an iOS or Kindle Fire app in place of the old ABC Player, it still offers video on-demand playback of the network's shows, but is the first to add live network TV streaming in those two areas. It will require customers to log in with their cable / satellite TV account details (Comcast, Cablevision, Cox, Charter, Midcontinent and AT&T U-verse are all signed up already) for access starting July 1st, but for now there's no such restriction. ABC is promising a launch in all ABC-owned station markets by the start of the fall broadcast season, though most areas will need to wait for agreements with their local affiliates.

Currently scheduled for launch after July 1st are Los Angeles, Chicago, San Francisco, Houston, Raleigh-Durham and Fresno, while Hearst Television has already signed on to launch streaming in its 13 markets as well. The app itself should resemble the WatchESPN and Watch Disney services we've seen roll out previously, and AirPlay streaming is disabled. The press release mentions Kindle Fire support, though we didn't see it in the Appstore yet, and it's coming to Samsung Galaxy devices "soon." There aren't any other Android devices mentioned, but hopefully more platforms will follow quickly. Hit the source links below for the app or to watch on the web, and there's a press release after the break with more details.

May 12, 2013 . . . Dedicated to expanding its network and channel brands across multiple platforms and connecting viewers with their favorite shows anytime and anywhere, Disney/ABC Television Group announced today that, beginning the afternoon of Tuesday, May 14, 2013 to coincide with its ABC Network Upfront presentation, its much anticipated "WATCH ABC" authenticated service will be available to all viewers in the New York City area via WABC-TV, the nation's most watched broadcast station, and WPVI, the #1 local station in Philadelphia, as part of a special open access preview, running through the end of June.

The new WATCH ABC service provides viewers for the first time ever with live access to their favorite ABC shows and local market programming, as well as a variety of on-demand content -- in more ways than ever before at home and on the go around town. In addition to allowing live linear streaming of viewers' local ABC stations, the new authenticated WATCH ABC service will include the great, on-demand full-episode viewing experience that the ABC Full-Episode Player and ABC Player app have offered, respectively, online and via tablets and phones. Viewers can access WATCH ABC online at ABC.com or by downloading the WATCH ABC app on their iOS or Kindle Fire devices. The WATCH ABC app will be available on Samsung Galaxy devices this summer.

"WATCH ABC is a game-changing innovation for the broadcast television industry. We're extremely excited to offer this open access preview to our WABC and WPVI viewers in New York and Philadelphia. This announcement represents a defining moment in technology and distribution, as well as for our advertising and affiliate partners, as we ensure that our high-quality content is available to viewers on a variety of devices," said Anne Sweeney, co-chair, Disney Media Networks, and president, Disney/ABC Television Group. "Our mission with this special preview is to gather key learnings about the service and the consumers who utilize it in order for our WATCH products to be the gold standard experience of authenticated multiplatform viewing."

Following the end of the open access preview, the WATCH ABC live streams will continue to be available in NYC and Philadelphia to authenticated users. Additionally, this summer WATCH ABC will roll out in the other six ABC-owned station markets, which include Los Angeles (KABC-TV), Chicago (WLS-TV), San Francisco (KGO-TV), Houston (KTRK-TV), Raleigh-Durham (WTVD-TV) and Fresno (KFSN-TV).

In addition to launching in the eight ABC-owned markets, the network has reached an agreement with Hearst Television to launch the WATCH ABC service in their 13 ABC station markets, which include Boston, Pittsburgh, Kansas City and Milwaukee, in the coming months. Agreements with other station groups are expected to be announced prior to the launch of the new Fall Season.

"Hearst Television recognizes that consumers want the ability to view our stations' programming on any device that has a screen," said David Barrett, chairman and CEO, Hearst Television, Inc. "Our Hearst ABC affiliates are eager to work with the ABC team to deploy the innovative WATCH app experience in our local markets."

Over the past several years, the Disney/ABC Television Group has consistently unveiled innovative, award-winning multiplatform services and apps. In addition to the WATCH services, other notable DATG apps include the Disney Junior Appisode app, which offers true interactive viewing, allowing kids ages 2-7 to touch, tap, swipe, tilt, shake and talk their way through various fun-filled activities embedded into episodes of some of their favorite Disney Junior shows; the ABC Player and ABC Family Player apps, which make full ad supported episodes available for viewing; the ABC News app; and the Emmy Award-winning official Oscars app, which provided unique backstage viewing experiences for the 83rd, 84th, and 85th Academy Awards.

In this article: abc, abc.com, apple, hdpostcross, ios, livetv, LiveTvStreaming, mobilepostcross, player, streaming, watchabc
All products recommended by Engadget are selected by our editorial team, independent of our parent company. Some of our stories include affiliate links. If you buy something through one of these links, we may earn an affiliate commission.