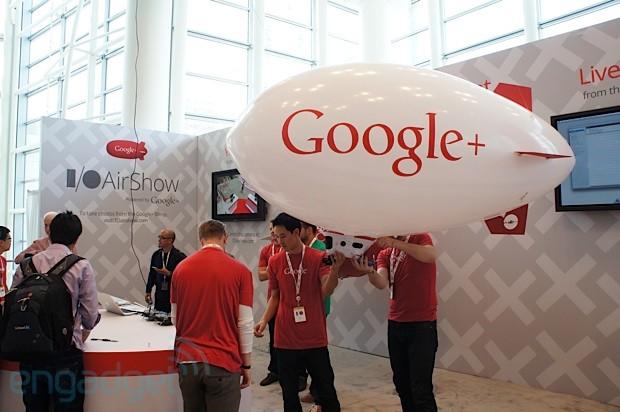 Yes, there's a fleet of camera-equipped, remote-controlled blimps live-streaming a bird's-eye view of Google I/O on YouTube, right now. It's called Google AirShow and it's taken over the airspace within Moscone Center. We briefly chatted with Chris Miller, a software engineer with AKQA (the company that put the dirigibles together for Google), about the technology used in each aircraft. It all begins with an off-the-shelf model airship that's flown manually via standard a 2.4GHz radio. Each blimp is outfitted with a servo-controlled USB camera and 5GHz USB WiFi dongle which are both connected to a Raspberry Pi board running Debian, VLC and Python. A custom-designed Li-polymer battery system powers the on-board electronics. The webcam encodes video as motion-JPEG (720p, 30fps) and VLC generates a YouTube-compatible RTSP stream that's broadcast over WiFi. Python's used to pan the servo-controlled camera via the Raspberry Pi's PWM output. The result is pretty awesome. But don't just take our word for it -- check out the gallery and source link below, then watch our hands-on video after the break.

21
In this article: AirShow, AirShow 2013, Airshow2013, AKQA, blimp, Chris Miller, ChrisMiller, Debian, google, GoogleIO2013, hands-on, IO2013, livestream, Python, Raspberry Pi, RaspberryPi, remote control, RemoteControl, RTSP, video, VLC, WiFi, YouTube
All products recommended by Engadget are selected by our editorial team, independent of our parent company. Some of our stories include affiliate links. If you buy something through one of these links, we may earn an affiliate commission.