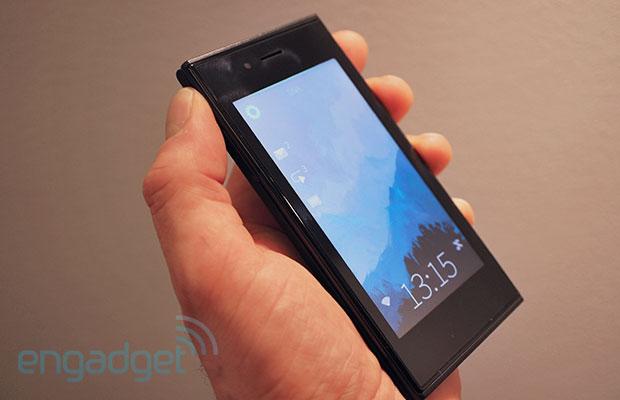 Say hello to the Jolla Phone. Pre-orders for the world's first Sailfish OS device started today and we've called into Helsinki to get the whole story from Jolla's co-founder and software head Marc Dillon. While we know there's a 4.5-inch "high definition" screen (resolution TBC), dual-core processor and 8-megapixel camera, we were kept at arms length during our meeting with an early prototype. So, unfortunately, our full hands-on treatment will have to wait until later today. For now, Marc takes us through the thinking behind the hardware -- and what the notion of the "other half" really means -- right after the break.

The most notable design point is how the device is split into two halves, with a back cover (available in several different colors) that can contain its own hardware components and communicate information from those components. The main half of the device, meanwhile, contains the display and processor.

This is where Jolla reckons its core innovation lies, with the opportunity to augment initial hardware in the future, as well as to allow personalization and other features at the software level. We quizzed Marc over what this might mean, and asked if things like wireless charging, high-capacity batteries, game controls and even a high-powered flash peripheral might be possible -- to which Dillon replied that all those ideas were possible, and that the only limit was "your imagination." It'll likely depend more on the reception of the device, although be assured that the OS we had demonstrated today looked just as fluid and intuitive as last time.

The Android app client remains on-board, while Jolla has made a concerted effort to appeal to the fragmented app market in China -- we're told the Jolla phone will be compatible with "multiple streams." The device is still pegged to arrive before the end of 2013, in time for Chinese New Year. We'll have our own opinions and a hands-on video (with a color option, we're promised) at the launch party in just a few hours.

Stefan Constantinescu contributed to this report.

In this article: jolla, jolla phone, JollaPhone, MarcDillon, meego, mobilepostcross, SailfishOs, video
All products recommended by Engadget are selected by our editorial team, independent of our parent company. Some of our stories include affiliate links. If you buy something through one of these links, we may earn an affiliate commission.