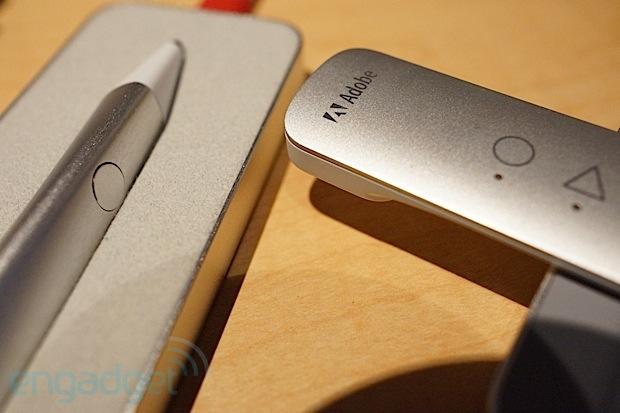 Adobe's best known for its creative software, but lately it's been toying with the hardware side of design. Over the past few weeks, the company's XD division's been teasing Projects Mighty and Napoleon for tablets: the former is a pressure-sensitive stylus, while the latter is a ruler for drafting. Both hardware experiments feature Bluetooth but, more importantly, they tap in Adobe's Creative Cloud. The units are essentially a serious side project for Adobe, but we have a feeling designers will be seriously excited once they get to see these prototypes in action. Geoff Dowd, XD's Design Lead, was kind enough to delve a bit deeper into the projects for us in a video walkthrough you can catch after the break. While we saw a few different design possibilities for Project Mighty on the table, certain aspects remained consistent: each has built-in storage, a selector button, an aluminum frame and a top-mounted LED for input feedback and Bluetooth status. Different variations of charging bases are also being tested, one with two contacts on the shaft and second which lets the tip rest in portable and desk-purposed cradles (we're told the latter has become the preferred one). The current tip is 5mm, but smaller variations are currently being worked out for finer applications.

A feature called Contact Detection is also onboard, which allows the stylus' companion app to recognize different types of input. For example, you could use your finger to copy, paste, erase and redo using only gestures and then go straight back to doodling. Of course, pen-based input commands can also be used for some tasks; the key is not having to select a menu to get things done. Holding the stylus against the screen brings up a circular Pen Tip menu to let you choose between the likes of brushes and Kuler themes, and to connect with your Creative Cloud account. Currently, there's a private SDK in the works for the menu so that its functions can be expanded. Best of all, Geooff noted that the styli last for tens of hours -- plus, mobile charging cases are in the works.

Now for Napoleon, "the short ruler." (Get it?) It's a drawing tool that uses two capacitive feet to serve as a guide for drafting. The unit can snap to different angles, letting you draw precise, parallel lines without having a steady hand. In fact, you can trace your lines from anywhere on the screen once it's set into position.

So, that's the short of it. We asked about pricing and availability for each, but our queries were met with only a smile and little information. At this point, the projects are being treated as a learning experiment that has the potential to make it to retail if XD feels they're worthy. That said, these are not going to serve as reference designs, so it looks like both are in Adobe's creative hands for the forseeable future. For now, you can sign up for more info at the source link and read Ge0ff's blog on the project at the more coverage link.

In this article: ad, adobe, adobe ad, AdobeAd, creative cloud, CreativeCloud, hands-on, project napoleon, ProjectNapoleon, video
All products recommended by Engadget are selected by our editorial team, independent of our parent company. Some of our stories include affiliate links. If you buy something through one of these links, we may earn an affiliate commission.