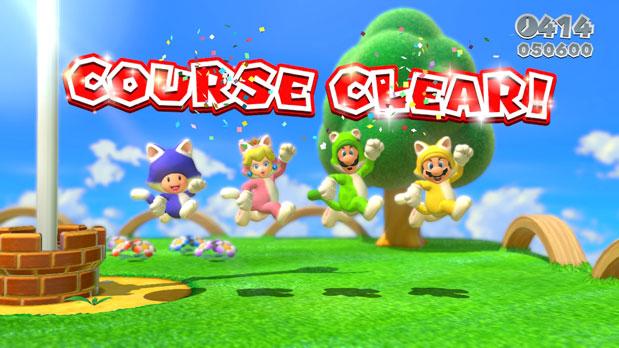 Nintendo may be sitting out this year's E3, but that doesn't mean the company doesn't have some games to show. On this morning's Nintendo Direct presentation, company head Satoru Iwata announced what most Wii U owners have been clamouring for: a new entry in the Mario series. The new title, Super Mario 3D World, reunites Mario and Luigi with Princess Peach and Toad (a la Super Mario Bros. 2) for a full, open world multiplayer experience. And much like the unique attributes they had in that second series installment, each character once again brings players special abilities, like Toad's fast run, Luigi's high jumps, Princess Peach's floating jumps and the all-around average Mario. According to Iwata-san, Super Mario 3D World is slated for a December release and will be available on the eShop, as well as in traditional brick-and-mortar shops. But knowing Nintendo's predilection for perfection, it's entirely possible that date could slip into early 2014. June 11, 2013 10:45 AM Eastern Daylight Time
Nintendo Systems Will Offer the Widest Array of Exclusive Games and the Most Fun and Compelling Experiences in 2013

New Adventures in the Super Mario, Donkey Kong, The Legend of Zelda, Luigi, Pokémon and Pikmin Franchises All Coming This Year for Wii U and Nintendo 3DS
E3 Expo 2013

LOS ANGELES--(BUSINESS WIRE)--Nintendo today unleashed a strong list of powerhouse games that will be available for Wii U this year, and provided first looks at key titles coming in 2014. These include some of the video game industry's most beloved franchises and characters, from Mario and Donkey Kong to Luigi, Pikmin and Pokémon to The Legend of Zelda, Mario Kart and Super Smash Bros.

"Nearly every major piece of Nintendo IP will be represented on our platforms in 2013, with even more coming in 2014"

Nintendo Global President Satoru Iwata introduced many of the games during a Nintendo Direct announcement. To view the Nintendo Direct in its entirety, visit http://www.nintendo.com/nintendo-direct.

"Nearly every major piece of Nintendo IP will be represented on our platforms in 2013, with even more coming in 2014," said Reggie Fils-Aime, Nintendo of America's president and chief operating officer. "There's one fundamental truth in the video game industry: Software sells hardware. That was true with Wii and Nintendo DS, it's starting to happen with Nintendo 3DS and will be on display this summer and holiday season with Wii U. When gamers are making their purchasing decisions this year they're going to find that the games and experiences they want are either unique or entirely exclusive to a Nintendo platform."

In addition to all of the game experiences available right now at E3, Nintendo has partnered with Best Buy to bring four upcoming Wii U games to the public for the first time. Visitors to participating Best Buy stores will be able to play demo versions of Super Mario 3D World, Mario Kart 8, The Legend of Zelda: The Wind Waker HD and Donkey Kong Country Returns: Tropical Freeze. The games will be playable 4-8 p.m. local time on Wednesday, June 12, and 1-5 p.m. local time on Saturday, June 15. A complete list of participating stores can be found at http://www.bestbuy.com/NintendoEvents.

Some of the key Wii U game info announced today by Nintendo includes:

Super Mario 3D World: For the first time ever, Nintendo has created a four-player Mario game set in a 3D world. The game, developed by the same team that created Super Mario 3D Land for Nintendo 3DS and the Super Mario Galaxy games for Wii, lets up to four players play as Mario, Luigi, Princess Peach and Toad. Each character has his or her own unique characteristics, and people can play cooperatively or competitively. The new cat transformation turns characters into adorable felines that can scratch enemies and even scamper up the flagpole at the end of levels. Clear warp pipes add some new puzzle elements to game play. The game is scheduled to launch this December.
Donkey Kong Country: Tropical Freeze: The first Wii U installment in the franchise comes from Retro Studios. The side-scrolling platformer has beautiful HD graphics that show fine details, such as Donkey Kong's fur. Dixie Kong joins the adventure, which features the Kongs swimming underwater and moving from the foreground to the background. This time, the camera changes perspective on certain levels to enhance the sense of motion and to deliver new experiences. The game is scheduled to launch this November.
The Legend of Zelda: The Wind Waker HD: The classic Nintendo GameCube game has been enhanced with beautiful HD 1080p graphics. In one change from the original, the Tingle Tuner has been replaced by the Tingle Bottle, which uses the Wii U GamePad controller to post comments about the game to Miiverse. Comments from players wash up on the shores of beaches in the game. Players also have the option to sail faster than they did in the original version. The game is scheduled to launch this October.
Mario Kart 8: The newest installment of the gold-standard racing game introduces an anti-gravity feature that has karts racing up walls and clinging to inverted tracks. Elements from previous Mario Kart games have made their return, including gliders and motorbikes. The game will support online multiplayer and will have deep integration with Miiverse. The game is scheduled to launch in spring of 2014.
The Wonderful 101: This PlatinumGames original launches Sept. 15. Players take on the role of Wonder-Red, leader of a group of superheroes. Individually they are overpowered by invaders from space. But by working together, they can transform into a fist or blade and unleash massive attacks on their enemy. The polished, over-the-top look and music evoke classic superhero comics and cartoons.
Bayonetta 2: Developed by PlatinumGames, the game's title character has had a makeover that gives her a new hairstyle and costume. Her climactic abilities are more powerful and the action is as intense as ever. The game is scheduled to launch in 2014.
A brand-new title developed by MONOLITH SOFTWARE INC.: Monolith Soft, the creative force behind The Xenoblade Chronicles, is creating an open world for players to explore. Players can ride human-shaped robots at certain points in the game, or use the robots to battle enemies in the sky. The game is scheduled to launch in 2014.
Wii Party U: Enjoy board games and mini-games on the TV, play familiar tabletop games using the Wii U GamePad controller or transform your living room into a game show floor. No matter what kind of party you're throwing, Wii Party U offers something for everyone. The game is scheduled to launch this October.
Super Smash Bros. for Wii U: The highly anticipated new entry in Nintendo's popular fighting franchise will arrive for Wii U in 2014.
Wii Fit U: Although this game was previously announced to launch in spring or summer this year, it is now scheduled to launch this December.

Pokémon X and Pokémon Y: The first games in the core Pokémon series to appear on Nintendo 3DS launch worldwide on Oct. 12. The games introduce an 18th Pokémon type: Fairy-type Pokémon, and have an upgraded graphical look that is an artistic pinnacle for the franchise. A new feature called Pokémon-Amie lets players create a deeper connection with their Pokémon. Trainers can pet them, feed them and play mini-games with them, which makes their Pokémon more effective in battles.
Super Smash Bros. for Nintendo 3DS: The hand-held counterpart to the Wii U version will also arrive in 2014.

Additional games that were not mentioned in the Nintendo Direct but are playable at E3 include:

Pikmin 3: This game is in a genre all its own. Players take command of three explorers and a legion of adorable Pikmin in a fight for survival. By employing the unique abilities of these tiny Pikmin creatures, players will solve puzzles, battle dangerous predators and recover food needed to save the explorers' depleted home planet. The game launches Aug. 4.
New Super Luigi U: Luigi takes center stage in his first starring role in a platform adventure. Players can show off their skills as Luigi, complete with his trademark high jump and unique slide, as they experience more than 80 new courses set in the world of New Super Mario Bros. U. For people who already own New Super Mario Bros. U, the new Luigi content launches as downloadable content in the Nintendo eShop on June 20. A stand-alone retail version of the game that does not require the original launches Aug. 25.
Mario & Sonic at the Sochi 2014 Olympic Winter Games: The game includes a variety of events from the Winter Games, including bobsleigh, skiing, figure skating pairs and snowboard slopestyle – which will make its Olympic Games debut in Sochi, Russia. Different events might use the Wii Remote Plus controller, Wii U GamePad controller or both. In addition to realistic events, the game also includes Dream Events set in the worlds of Sonic and Mario that let players perform moves not possible in real life. Launch details and timing will be announced at a later date.

The Legend of Zelda: A Link Between Worlds: This game takes place after the events of and in the same world as The Legend of Zelda: A Link to the Past. Link can now become a drawing to move along walls. This opens up ways to explore and puzzle elements that give Link access to locations he could not otherwise reach. The game is scheduled to launch this holiday season.
Yoshi's New Island: The third game in the series offers classic Yoshi abilities while introducing new ones, such as giant Mega Eggs that Yoshi can use to mow down obstacles. The game features different worlds in a variety of art styles, including oil, watercolor and pastels. The game is scheduled to launch this holiday season.
Mario & Luigi: Dream Team: Mario and Luigi embark on the adventure of their dreams in a hilarious action RPG that combines action in both the real world and inside Luigi's dreams. The game launches Aug. 11.

Mario & Sonic at the Sochi 2014 Olympic Winter Games TM IOC/SOCHI2014/USOC 36USC220506. Copyright © 2013 International Olympic Committee ("IOC"). All rights reserved. This video game is the property of the IOC and may not be copied, republished, stored in a retrieval system or otherwise reproduced or transmitted, in whole or in part, in any form or by any means whatsoever without the prior written consent of the IOC.

All other trademarks and copyrights are properties of their respective owners.

In this article: E32013, nintendo, SuperMario3DWorld, WiiU
All products recommended by Engadget are selected by our editorial team, independent of our parent company. Some of our stories include affiliate links. If you buy something through one of these links, we may earn an affiliate commission.