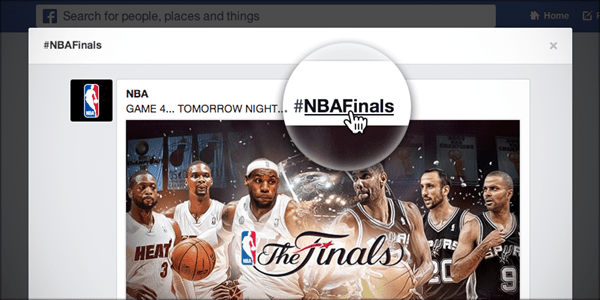 Facebook wants to help you make your conversations just a little more discoverable (if you so desire), and it's decided to finally include a long-missing feature -- clickable hashtags -- to the News Feed. If you've ever enjoyed hashtag searches on Twitter, Instagram or other social networks (some of our friends enjoy them a little too much, if you ask us), you'll now have the same feeling of exhilaration on Zuckerberg's service as you are now able to click on each one. Up until today, any hashtags from imported tweets or Instagram posts just showed up as regular text, with no backlink to accompany them. When it comes to the visibility of your own hashtags, Facebook won't allow any unintended audiences to see your private updates, so you remain in control of your desired privacy. The company also plans to roll out trending hashtags and other related features in the coming months, but this is a good start for now. The company's official blog post can be found below.

Every day, hundreds of millions of people use Facebook to share their thoughts on big moments happening all around them. Whether it's talking about a favorite television show, cheering on a hometown sports team or engaging with friends during a breaking news event-people on Facebook connect with their friends about what's taking place all over the world.

During primetime television alone, there are between 88 and 100 million Americans engaged on Facebook - roughly a Super Bowl-sized audience every single night. The recent "Red Wedding" episode of Game of Thrones, received over 1.5 million mentions on Facebook, representing a significant portion of the 5.2 million people who watched the show. And this year's Oscars buzz reached an all-time high on Facebook with over 66.5 million interactions, including likes, comments, and posts.

To date, there has not been a simple way to see the larger view of what's happening or what people are talking about.

To bring these conversations more to the forefront, we will be rolling out a series of features that surface some of the interesting discussions people are having about public events, people, and topics. As a first step, we are beginning to roll out hashtags on Facebook.

• Search for a specific hashtag from your search bar. For example, #NBAFinals.
• Click on hashtags that originate on other services, such as Instagram.
• Compose posts directly from the hashtag feed and search results.

As always, you control the audience for your posts, including those with hashtags.

Hashtags are just the first step to help people more easily discover what others are saying about a specific topic and participate in public conversations. We'll continue to roll out more features in the coming weeks and months, including trending hashtags and deeper insights, that help people discover more of the world's conversations.

In this article: facebook, hashtag, hashtagawesome, social
All products recommended by Engadget are selected by our editorial team, independent of our parent company. Some of our stories include affiliate links. If you buy something through one of these links, we may earn an affiliate commission.