Which gaming PCs are worth buying? 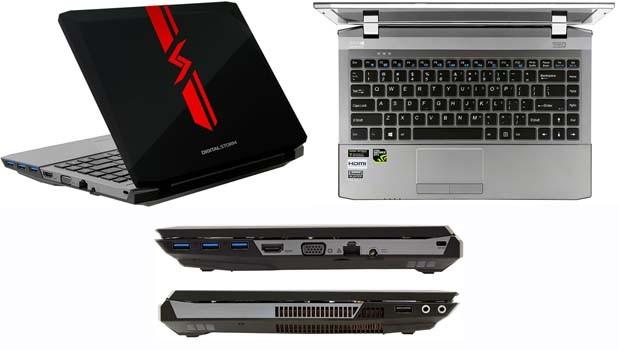 Digital Storm's mostly known for its many desktop gaming rigs, but it dabbles in laptops, too. Its latest portable offering, the VELOCE, comes packing a 13.3-inch, 1920 x 1080 display, a quad-core Haswell Core i7 4800MQ CPU and NVIDIA GTX 765M graphics. It's also got 8GB of RAM and 2GB of graphics memory along with three USB 3.0 ports, HDMI, VGA out, and Bluetooth 4.0. Storage comes in the form of a hybrid drive comprised of a 7,200RPM 750GB HDD and an 8GB SATA SSD. All that hardware tips the scales at 4.6 pounds and is 1.26 inches thick -- sizing right in line with its 14-inch competition from MSI, but roughly twice the girth and a half-pound heavier than a Razer Blade. Regardless, those yearning for a VELOCE of their own can grab one at Digital Storm's website should they be willing to part with $1,535 come July 17th.

Digital Storm Unveils the 13.3" VELOCE Gaming Notebook – The Ideal Balance of Power and Portability
VELOCE is the first Haswell based slim gaming notebook to feature a full HD 1080 display

FREMONT, Calif. - (July 10, 2013) – Digital Storm today unveiled VELOCE, a slim 13.3" gaming notebook that packs a serious punch. Despite weighing in at a mere 4.6 pounds (including battery) and only 1.26 inches thick, the portable VELOCE is ready to do battle anytime, anywhere.
"VELOCE is the gaming notebook the industry has been waiting for," said Rajeev Kuruppu, Digital Storm's Director of Product Development. "The notebook strikes the optimal balance of power and portability without sacrificing gaming performance and is the first Haswell based slim gaming notebook to offer a stunning full 1080 HD display."

Starting at $1,535, VELOCE is aggressively priced despite boasting a payload superior to any other gaming notebook in its class. Armed with an Intel Core i7 4800MQ processor, NVIDIA's GTX 765M graphics card, 8GB of memory and a full high-resolution HD screen (1920x1080) 13.3" display, VELOCE's comes well equipped despite its slim, portable design.

VELOCE will be available on July 17th at: http://www.digitalstormonline.com/gaming-laptops.asp

Life-time U.S. based technical support and customer service by our own in- house technicians

In this article: digital storm, digital storm veloce, DigitalStorm, DigitalStormVeloce, veloce
All products recommended by Engadget are selected by our editorial team, independent of our parent company. Some of our stories include affiliate links. If you buy something through one of these links, we may earn an affiliate commission.