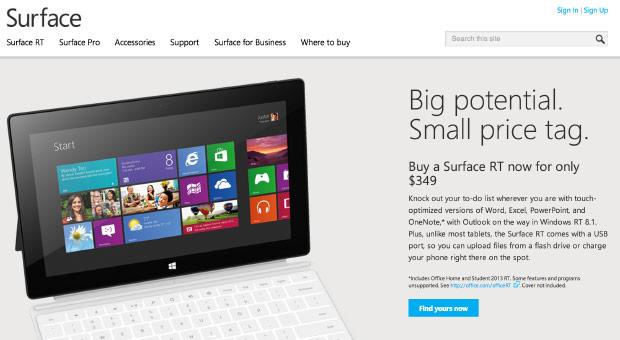 Microsoft's Surface RT is hardly the world's most popular tablet, but the software giant clearly wants to create some momentum for its aging Windows 8 slate. MS just dropped the device's price to $349, representing a $150 decrease for the 32GB model. Staples was the first reported retailer with slashed pricing -- the tablet went on sale there yesterday -- and Microsoft's UK and Australian online stores have followed up with pricing of £279 and AU$389, respectively. The new MSRP appears to be live on at least three continents, and you can take advantage at our source links just below.

In this article: microsoft, surface, surfacert, tablet, tablets, windows8
All products recommended by Engadget are selected by our editorial team, independent of our parent company. Some of our stories include affiliate links. If you buy something through one of these links, we may earn an affiliate commission.