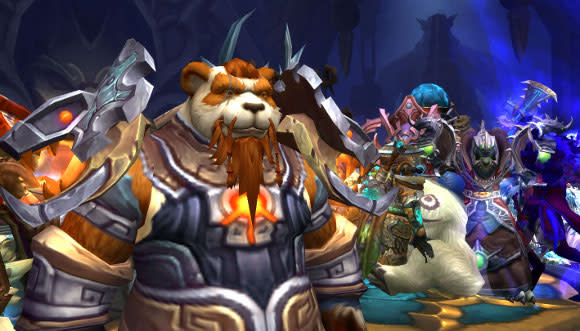 Thins are still shifting, as they always do on the lead-up to a major content patch. This time though, it looks like our topic from last time had some good timing. The debate about Healing Tide Totem seems to have been answered by our good friends at Blizzard right before the holiday break occurred. The breaking news was that the totem of healing goodness would no longer be a talent, but rather would be a baseline ability for all shaman.

The news brought up a cry of relief from all shaman, as it meant in the near future they'll just have it to use without having to invest a talent point for it. On top of everything, HTT going baseline means we're going to have to get a new talent to replace it, and anticipation has been pretty high for it.

When we talked about Healing Tide Totem last week, one of the points of debate was whether or not the talent was too powerful, and questioning the future of the talent as other healer abilities scale beyond the reach of HTT. Well, we were treating to even more news about HTT going baseline. We talked about it having a higher spellpower coefficient, sitting at around 72%, but now that it is baseline the files show that it is in fact down to 48% of our spellpower. This may seem like a nerf, and truth be told it is to an extent, but this comes at the news that the totem will affect 12 targets in 25 player instances. It is a good thing, don't get me wrong, but personally I expect to see that spellpower coefficient will go back up a little bit before live release.

This change is ultimately a good thing, and it is a step in the right direction overall for HTT and for shaman healing in general. It does push us a little bit further back towards that whole healer specialty thing that we had throughout The Burning Crusade and Wrath of the Lich King, but I personally never had too much of a problem with that. I personally feel better about the ability as a whole after this change, especially since it's no longer a talent.

Conductivity also got a bit of a change, so that casting Healing Wave, Greater Healing Wave, Healing Surge and Chain Heal will increase the duration of Healing Rain by 3 seconds. This does make the talent a little more attractive on the fights where we're going to be stacked right on top of each other, since increasing the duration of Healing Rain gives you extra AoE healing and that is a good thing. It may not exactly be free, since it's casting of another spell that extends it, but it does give you a nice little buffer while handling something else like spiking up a tank or a DPS that decided that they were a little too cold and stood in the fire just a little bit too long with single target healing. The update to conductivity has potential, though I'm still not sold on it quite yet. Going to need to see how the fights shape up in the next tier of raiding before I can say if this is something that I personally will use at all or not.

When you remove something, another item has to fill the void. We got our first glimpse of the replacement for HTT totem, the new talent called Rushing Streams. This talent is similar in effect to what our current Shaman T15 Restoration 2P Bonus is. Rushing Streams allows Healing Stream Totem to heal two targets at once, not only without penalty, but for an additional 15% healing. It's pretty darn good right out of the gate, and just like our Tier 15 two piece bonus it does synergize really well with Call of the Elements. It is just going to be incredibly strong buff, does not have any cooldown and just is an overall buff to throughput.

The problem is, well, it's very strong for those very reasons. As it is right now, that talent has the potential to just overshadow the other two talents of the shared tier just like HTT did. It seems odd to me that HTT got moved to being a baseline talent because it felt too mandatory, to the point where even DPS shaman will take it on certain heroic fights, but here we have something that feels equally as powerful and potentially as mandatory as HTT did. To be honest I'm not sure how I feel about it.

My personal belief is that talents should be either fun, or be of equal power across the entire tier and each be useful. While Conductivity is starting to shape up into something that could potentially be handy, I still fear that it's going to get blown away by Rushing Streams for healing shaman and we'll be right back where we started before the patch. Personally I would have preferred to see something more geared towards single target healing, something the opposite of what Conductivity is but of equal power. I just really feel like Rushing Streams is going to wind up being just as mandatory as HTT was.

So the question of the day is, how do you feel about HTT becoming a baseline talent? Do you like the fact that in 25 man raids the totem will heal 12 targets instead of just 5? What do you think of our new talent? Do you think it's too good, just right or not nearly powerful enough? What would you have made as a talent to replace HTT?

Totem Talk: Restoration lends you advice on healing groups, DK tanks and heroics and mana concerns in today's endgame -- or take a break and look back at the rise of the resto shaman. Happy healing, and may your mana be plentiful!
In this article: featured, guide-to-shamans, healing tide totem, HealingTideTotem, resto, Resto-Shaman, restoration, restoration-shaman, restoration-shaman-column, restoration-shaman-totem-talk, shaman-guide, shaman-healing, shaman-info, shaman-restoration-column, shaman-talents, wow-shaman, wow-shaman-info
All products recommended by Engadget are selected by our editorial team, independent of our parent company. Some of our stories include affiliate links. If you buy something through one of these links, we may earn an affiliate commission.