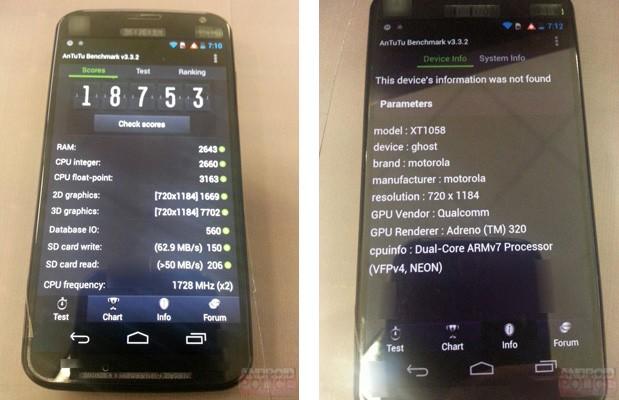 We've already seen Motorola's rumored Moto X in press renders, photos, videos and even the hands of a Google executive; why not throw some benchmarks and specifications into the mix? Android Police is more than happy to add that grist to the rumor mill with a set of photos that reportedly show the AT&T Moto X ("Ghost") running AnTuTu and 3DMark tests. If accurate, the scores hint at a mid-range Android 4.2.2 phone whose 1.7GHz dual-core Snapdragon S4 Pro and 2GB of RAM produce good (though not great) results. The rest of the visible specs are equally middle-of-the-road -- we see a 720p screen, 16GB of built-in storage, NFC, a 10.5-megapixel rear camera and a 2.1-megapixel front shooter. The hardware alone may not tempt customers, then, but Motorola could be counting on customization and software tricks to lure more customers. We'll know the full story on August 1st.

In this article: 3dmark, android, antutu, att, benchmark, ghost, google, mobilepostcross, motorola, motox, smartphone, snapdragons4pro, xt1058
All products recommended by Engadget are selected by our editorial team, independent of our parent company. Some of our stories include affiliate links. If you buy something through one of these links, we may earn an affiliate commission.