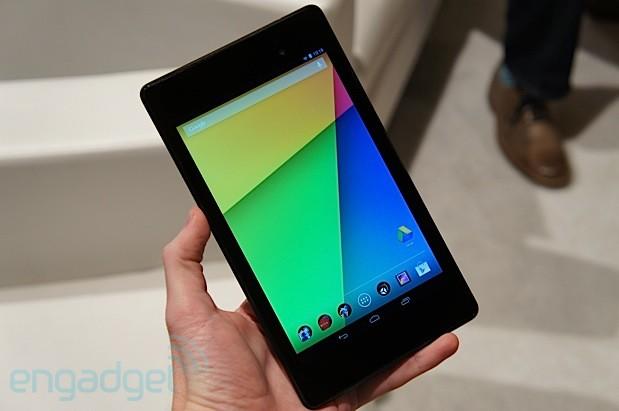 The Nexus 7 was a rather swell device when it was officially launched last year, and now we've had the opportunity to play with the next-gen version, which bumps the swellness factor a notch or two. The tablet, which boasts a 1080-quality display (1,920 x 1,200, to be precise) and Android 4.3 Jelly Bean, is being shown off after this morning's Breakfast with Sundar event -- which we suppose means we're now at brunch. We've grabbed a few images of the new tablet, seen below, and have added some early impressions after the break. Meet us there to see what we think.

Update: Hands-on video after the break!

While most of the tablet's specs are improved over last year's model, one of the most visible differences is its HD display. Our experience looking at the new Nexus 7 was very similar to the bliss that we had after seeing the Nexus 10's panel for the first time, only this one is of course smaller. Certainly, a pixel density of 323 ppi is pretty impressive, and we were quite impressed by the amount of detail we were able to see in the sample videos and photos running on the demo device we handled.

We loved how the Nexus 7 felt in our hands, especially since the original version was a good deal thicker. The 23-gram (0.8-ounce) weight difference is noticeable, too. Due to the thinner profile, we found that our hands were able to grasp onto the sides of the device a little more easily, so and we didn't worry about dropping it as much either (not that that was a huge concern with last year's model).

Under the hood, the Snapdragon S4 Pro chip is also a nice step up from last year's Tegra 3 SoC. Combined with the faster GPU, an additional gigabyte of RAM and Open GL ES 3.0 support, we're left with a far smoother gaming experience with plenty of subtle improvements to the graphics experience in particular. We'll reserve final judgment for our forthcoming review, but we were at least initially satisfied that this new iteration of the Nexus will perform better than the last (especially when it was updated to Android 4.2).

Based on our first impressions, it seems clear that at a starting cost of $229, the Nexus 7 -- much like we saw last year -- is hitting an excellent price point with a good balance of performance and componentry without giving the impression that like Google or ASUS cut any corners. Keep an eye out for our review in the coming days.

In this article: asus, editorial, google, googlebreakfast2013, newnexus, nexus, nexus7
All products recommended by Engadget are selected by our editorial team, independent of our parent company. Some of our stories include affiliate links. If you buy something through one of these links, we may earn an affiliate commission.