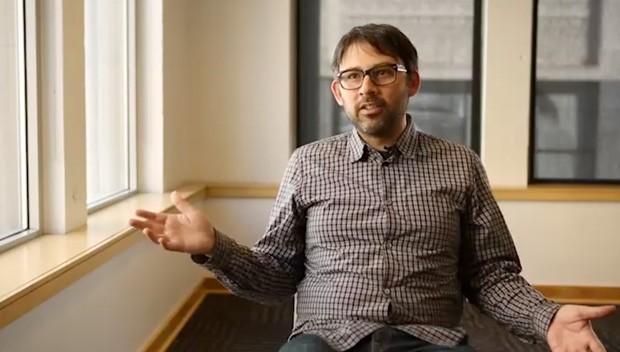 "You can't deny the math," Tony Kiewel says, with the slightest hint of defeat in his voice. "The math is bad and continues to get worse for the whole pie." Sub Pop's head of A&R's not particularly bullish when asked about the state of the music industry. It's been a rough couple of years -- decades, really -- and the idea of the record label going the way of its brick-and-mortar counterpart doesn't seem like some far off prediction, as the majors continue to implode under their own unwieldy weight at an impressive clip. But Kiewel's pessimism is tempered with a note of enthusiasm. All said, things could have been much worse for the legendary Seattle label, which has managed to weather the technological storm largely unscathed. "Our piece of the pie is so much bigger than it was two years ago," the bespectacled executive adds.

A dozen years ago, around the same time the first iPods, now big, boxy anachronisms, began to find their way into the hands of early adopters, Sub Pop experienced a renaissance, after years spent wandering forests of obscurity. In the '90s, the label was the epicenter of one of the most important music movements in recent memory, coming a long way from its humble beginnings as a zine published a few hours south of Seattle in Olympia, Wash. For a few heady years, it seemed that every record of note sported the label's iconic two-tone block label on its rear -- but Sub Pop's reign, like the grunge music it championed, wasn't long for the charted world.

By the time the early 21st century rolled around, however, something happened. "We didn't know what the hell was going on," Kiewel recalls, with audible excitement. "At one point, there was so much [traffic] that it was breaking everything. It was people downloading 'Such Great Heights,' the Postal Service song. There were thousands and thousands of kids that had soundtracked their MySpace page with the MP3. It became a debate for years -- maybe we should take down that free MP3. We left everything alone and backed away slowly." Between the Death Cab for Cutie mail-order side project and the haunting indie-pop of Albuquerque's The Shins, Sub Pop was relevant again -- thanks in large part to the magic of social networking.

Kiewel's the first to admit that, like the rest of the industry, his label struggled to come to grips with the power of the internet, causing a rethink in fundamental concepts of music monetization. "Everyone thought iTunes was insane, too," he adds. "Why would you ever pay money for an MP3?" It's a question the industry continues to ask regularly, of course, with the explosion of streaming services. In 2001, however, it was an impossible thought for an industry still reeling from the fallout of Napster, the brainchild of a Cape Cod kid that many in the industry no doubt assumed spelled the end of life as they knew it.

Of course, in some respects, they've been proven right, though somewhat more indirectly than they expected. What P2P piracy represented instead, was an enormous shift in paradigms, the beginning of a new model, to which labels both large and small would have to adapt if they hoped to survive. Part of the process was coming to grips with the realization that "free" wasn't necessary a bad word. A few years after Metallica's Lars Ulrich and the RIAA burned Napster to the ground, MySpace made it apparent that a little free went a long way. That realization has since been compounded by the explosion of YouTube, which, in the past year or two, has shifted from a wasteland of royalty takedown notices to a place where rights holders can not only embrace, but monetize, creative pursuits born out of the songs they represent.

"YouTube, which has now become this paramount method for streaming," explains Kiewel, "we're just starting to look at it now as a revenue source. There [are] two options. There's the block option: 'this content has been taken down.' We, as a label, have another option, and that's to monetize it. They want to use this Band of Horses song in a cat video? Go for it. But send whatever ad revenue [that] comes our way." It's a change born of survival instinct, sure, but it also represents a possible future, as consumers and artists alike continue to question the importance of labels. And while Kiewel admits that record labels, as we recognize them now, may not be long for this world, there's likely to always be a place for organizations that can do the heavy lifting that comes with making music. "That's pretty revolutionary that the default for most labels is 'go ahead, do whatever you want to do,'" he explains. "It's the antithesis of what the reputation has been, historically."

Labels, too, will be in place to catch royalties from services like Spotify and Rdio. And while the criticism of low royalty rates amongst the aforementioned streaming services isn't without merit, Kiewel points out that, when it comes to making money on the internet, every little bit counts -- and it will likely continue to be the label's role to do that counting. "Someone who is much smarter than me talked about the rivers of pennies," he says. "You can't ignore anything anymore, especially with these streaming companies where it's pennies sometimes. It's finding these trickles of pennies and making sure you count each one and are where you need to be."

But models, like services, come and go, particularly these days, and the adaptiveness that has served Sub Pop for the past decade is almost certain to become even more important to the label's survival. And while it's tough to predict whether the industry will ever be half as stable as it was prior to the explosion of online music stores, there's a pervasive sense that, at the very least, things are moving toward a more dominant model. And as we wait to find out precisely what that model will be, Kiewel believes that it's the job of the labels to be flexible -- and to hang on for dear life. "I think there's gonna be a reckoning," he says rather ominously. "There's no such thing as a seamless transition. There will be causalities. It's just surviving long enough for whatever new model asserts itself."

In this article: itunes, spotify, sub pop, SubPop, tony kiewel, TonyKiewel, video
All products recommended by Engadget are selected by our editorial team, independent of our parent company. Some of our stories include affiliate links. If you buy something through one of these links, we may earn an affiliate commission.