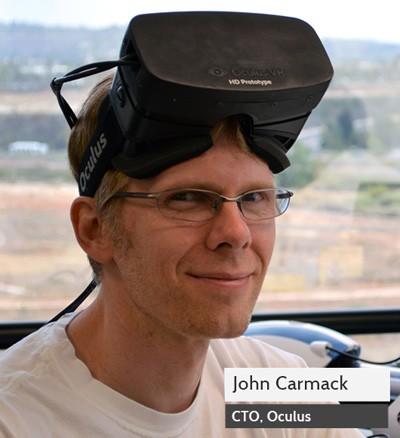 It turns out that Doom co-creator John Carmack is more than just a virtual reality fanatic -- he's joining the company that's leading the most recent VR revolution, today announcing that he's taking the reins as Chief Technology Officer at Oculus Rift. In an email from the folks at Oculus, Carmack was confirmed to be out at the company he helped found -- id Software -- and joining Oculus full-time as CTO. He will apparently still serve some role at id, as id's parent company told Engadget, "The technical leadership he provides for games in development at id Software is unaffected." We've asked both Oculus and id's parent company for clarification.

Carmack said in a prepared statement that the first time he wrote code for Oculus, it stood up to many firsts he's experienced in modern gaming: "the intensity of the first-person experience, LAN and internet play, game mods and so on." Additionally, he believes VR "will have a huge impact in the coming years" -- Carmack is the first announced big new hire at Oculus. CEO Brendan Iribe said in the announcement PR that Oculus is, "putting together a team of the brightest minds." Carmack, as it turns out, was at the very top of Oculus' list.

Carmack got his hands on the Oculus Rift dev kit headset far earlier than most, spotting creator Palmer Luckey's still nascent creation in a VR forum online. After getting in touch, Carmack asked Luckey if he could check out a prototype, which led to Carmack showing off a ported version of Doom 3 at E3; Doom 3's Oculus Rift version was supposed to ship with initial dev units, though that was later called off. Carmack also runs a rocket building company named Armadillo Aerospace, which he recently characterized as "in hibernation."

Update: Bethesda Softworks (parent company to id Software) responded with the following statement to today's news: "John has long been interested in the work at Oculus VR and wishes to spend time on that project. The technical leadership he provides for games in development at id Software is unaffected." We've followed up for clarification as to what that means for Carmack's efforts at id. In the note from Oculus, Carmack is said to be heading up and working out of newly created Dallas offices for Oculus.

Update 2: Carmack tweeted a bit of clarity to his new role at Oculus among his other jobs, saying, "My time division is now Oculus over Id over Armadillo. Busy busy busy!"

Update 3: Oculus offered yet another statement, this time saying, "John is working full-time Oculus. He is fully-engaged at Oculus as the Chief Technology Officer (CTO). As you can guess from the title, CTO is never part time, it is a full time gig. John's role at id is between John and id."

We have incredible news to share with the community: legendary game programmer John Carmack will be officially joining the Oculus team as our new Chief Technology Officer (CTO).

John is one of the brightest minds of our generation -- pioneer, visionary, and industry legend. There are very few people in the world that can contribute to the Oculus Rift and the future of virtual reality like John can.

John put together a short note for the Oculus community:

"I have fond memories of the development work that led to a lot of great things in modern gaming – the intensity of the first person experience, LAN and internet play, game mods, and so on. Duct taping a strap and hot gluing sensors onto Palmer's early prototype Rift and writing the code to drive it ranks right up there. Now is a special time. I believe that VR will have a huge impact in the coming years, but everyone working today is a pioneer. The paradigms that everyone will take for granted in the future are being figured out today; probably by people reading this message. It's certainly not there yet. There is a lot more work to do, and there are problems we don't even know about that will need to be solved, but I am eager to work on them. It's going to be awesome!"

If you're unfamiliar with John's background, John co-founded id Software, served as lead programmer on Wolfenstein 3D, Doom, and the Quake series, and is one of the pioneers of 3D graphics. When John's not working on revolutionizing video games or computer graphics, he can be found coding at Armadillo Aerospace.

If you've been following Oculus since the launch of the Kickstarter campaign (or before that on MTBS3D), you know that John has been a part of the project and a true believer in the future of virtual reality since the beginning. He was the first developer to actually integrate the Rift into a game, back when the hardware was just a hand-held prototype without an SDK.

John will be working from the new Oculus Dallas office that we're opening soon. We're looking for a few key hires to help us in Dallas, so if you're interested, check out the Oculus Careers page.

Please join us in welcoming John to the Oculus family! You can follow John at @ID_AA_Carmack on Twitter.

Happy anniversary to our Kickstarter backers! We've come a long a way in 1 year, and we can't wait to show you where we're headed next. This is just the beginning.

-- Palmer, John and the Oculus team

In this article: hdpostcross, johncarmack, oculusrift, timeline16oculusrise, virtualreality, vr
All products recommended by Engadget are selected by our editorial team, independent of our parent company. Some of our stories include affiliate links. If you buy something through one of these links, we may earn an affiliate commission.