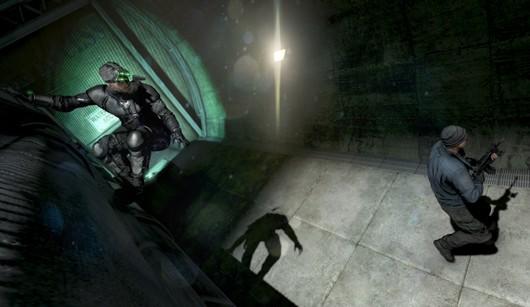 It was while stuck behind enemy lines, carefully studying the movements of armored guards that I realized just how deeply I'd fallen for Splinter Cell Blacklist. Completing most of the game as an unseen and non-lethal ghost, I left the franchise's protagonist motionless for minutes as I examined the patterns of three aggressive adversaries. This is the Splinter Cell of days past, a game with as much focus thrown at patient stealth progression as at Hollywood bombast.

Back from the cold, Splinter Cell hero and seemingly ageless covert agent Sam Fisher returns to help thwart American enemies. For Sam's latest jaunt through coordinated terror strikes, Ubisoft Toronto recalls the stealth gameplay that made the series famous, while offering more action-focused players tools to survive an onslaught. Whether it's a player's desire to pass through each sequence completely unseen or leave nary a pulse beating in their wake, Splinter Cell Blacklist allows them to craft their perfect gameplay style. Despite the youthful spring in Sam's mo-capped steps and the distinct lack of Michael Ironside's sultry voice, Splinter Cell Blacklist is not a reboot. This is a direct continuation of 2010's action-heavy (and therefore divisive for fans) Splinter Cell: Conviction. Sam Fisher, after being on the run, is now back at work for the United States government as the leader of the newly-formed Fourth Echelon. Armed with a mobile base known as the Paladin (it's a plane) and a crew of analysts, Fourth Echelon gets right to work when a group known as The Engineers terrorizes an American base in Guam and promises an escalating series of attacks on U.S. interests unless the United States removes its troops from foreign soil.

Blacklist's narrative has an action movie's sense of urgency, constantly pushing Sam & Friends to new and more dangerous locales around the globe as they attempt to uncover where the terror group will strike next. A few intelligent twists kept me guessing, thanks mostly to great (and criminally underused) voice work from actor Carlo Rota as the game's primary Big Bad, but ultimately the story begins to fall apart near the end when questions are raised about the true nature behind the terror group's plan and, oh, never mind, the game is over now so forget we asked.

Though the game's primary state is "third-person shooter/sneaker," Blacklist keeps you on your toes with a few surprising first-person missions, the ability to control artillery during specific ops, take control of a sniper overwatch, and more.

Perfect stealth, which was lacking in Splinter Cell's previous iteration, is more than the ability to stay hidden. For me, perfect stealth is being able to control a room from multiple angles and survive unforeseen situations as they arise. Splinter Cell purists will be happy to learn that you can complete Blacklist's campaign without killing any adversaries. (Yes, there's a trophy/achievement for it.) For the stealth-minded, there's an inherent sense of trial and error whenever an enemy spots you. Rather than fall back on rebooting constantly, I tried to use the game's tools to support my gameplay style, such as using the Mark & Execute feature to support my non-lethal stealth focus. Equipping Sam's new crossbow with sticky shocker ammo, I would mark enemies in each room before moving in for stealth takedowns, showing me their position on my HUD and allowing me to take them out quickly if my plans went awry. If I came too close to being spotted, the execute button became my own personal "Oh, shit!" button, swiftly and quietly taking out all in-range marked enemies.

Once you've mastered Blacklist's take on stealth, higher difficulties offer new challenges by disabling some of Sam's more modern gear (like sonar goggles, that allow him to see enemies through walls) and a few of his newer abilities (like executions and restocking during missions).


Rather than offer co-op missions in a separate menu, Splinter Cell Blacklist attempts to integrate these optional modes as side quests to the main campaign. Each mission type, offered by different members of Sam's crew on the Paladin, has a light story wrapper that ties in with the Engineers' narrative. Speaking with newly-appointed Splinter Cell agent Isaac Briggs, Sam can activate the co-op campaign. The story isn't as involved as some of the previous co-op campaigns featured in the franchise, but it offers brand new locales, enemies, and hours of gameplay. It does, however, end with major questions being asked of returning characters, which may point to new content on the horizon. One of the franchise's returning characters, Anna Grimsdottir, has a number of stealth-only infiltration missions available for Sam (which can also be completed in co-op), harkening back to the days of failing if ever the aging agent is spotted. The least impressive of the bunch is a wave-based terrorist hunt mode, which is completed on a number of maps that seem modeled more for assault class agents and offer little support to those with a stealth tilt. It was here that my "Oh, shit!" button was on high-alert to varying levels of success. Eventually, I gave in and was throwing frags and firing shotguns to progress.

In "Classic" mode, two spies in third-person attempt to hack terminals being defended by two first-person mercenaries. There are no loadouts or classes, maps are bathed in darkness, and the tension is so exhilarating you'd wonder why Ubisoft has been sitting on the grand idea for a decade. No other multiplayer experience compares to the satisfaction derived from successfully sneaking up to a soldier and cutting them down with a melee strike or the jolt you'll feel while protecting the final terminal from a pair of spies in a darkened room. Spies vs. Mercs is fodder for water cooler discussion between video game fans, retelling stories of their most daring escapes or their most heroic defenses.

Multiplayer's new mode – titled Blacklist – brings the count of combatants to 4v4. The Blacklist mode differs from classic with well-lit maps and the addition of classes. There are other game types like Team Deathmatch and variants of Capture the Flag where teams can mix and match spies with mercs, but the real jewel is the Classic and Blacklist modes. Spies vs. Mercs was ahead of its time when it first appeared in 2004's Splinter Cell: Pandora Tomorrow; years later the core idea remains creative with an execution in Blacklist that is one of the most exciting multiplayer experiences I've ever had.

Multiplayer begins with spies and mercs in possession of skill sets and gear balanced perfectly against each other, but you can customize your particular character; picking and choosing the gear you like best. How these customizations will ultimately impact the multiplayer experience - either by throwing the balance completely out of whack or creating exciting, unforeseen combinations - is up to the will of the players.

Patiently waiting in a room for a guard to move may sound like the opposite of an exhilarating experience, but it's the tension of planning coupled with execution that makes Splinter Cell Blacklist such a winner. Blacklist's multiple methods of enemy engagement brings Ubisoft's grizzled veteran spy to an outstanding new frontier, giving players the best game in the franchise's history.

Joystiq's review scores are based on a scale of whether the game in question is worth your time -- a five-star being a definitive "yes," and a one-star being a definitive "no." Read here for more information on our ratings guidelines.
In this article: microsoft, nintendo, playstation, ps3, splinter-cell-blacklist, Ubisoft, Ubisoft-Montreal, Ubisoft-Shanghai, Ubisoft-Toronto, wii-u, xbox
All products recommended by Engadget are selected by our editorial team, independent of our parent company. Some of our stories include affiliate links. If you buy something through one of these links, we may earn an affiliate commission.