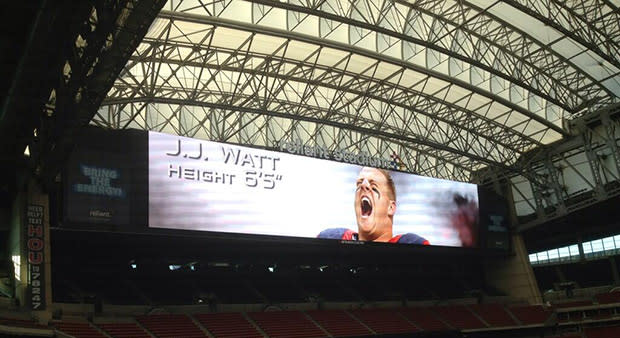 Everyone at the August 17th NFL preseason game in Houston's Reliant Stadium will be treated to humongous images of sweaty athletes, thanks to the venue's monstrous scoreboard. According to Reliant's officials, the new HD monitor isn't just any enormous display, but the widest one in professional sports. We're talking about several connected boards measuring 277.17 x 52.49 feet as a whole, with each display covering 14,549 square feet and boasting a 5.28 million pixel resolution. That's more than 100 feet wider than Dallas Cowboy's LED setup, enough for Reliant to usurp its throne as the widest screen in football, and largest in Texas. Due to the scoreboard's gigantesque real estate, it can show not only side-by-side live feeds and replays, but also statistics and advertisements during a game. Unfortunately for the folks at Houston, the stadium can only hold the record for a year. Jacksonville's Everbank Field will debut an even longer 301 x 55 feet scoreboard in 2014, and Charlotte Motor Speedway still holds the overall sports record with its 200 x 80 foot screen.

In this article: football, hdpostcross, HdScoreboard, houston, reliant, scoreboard, sports, stadium, texas
All products recommended by Engadget are selected by our editorial team, independent of our parent company. Some of our stories include affiliate links. If you buy something through one of these links, we may earn an affiliate commission.