In late 2007, One Laptop Per Child launched its "Give 1 Get 1" program. While the do-gooder organization had originally shrugged off suggestions that it should offer its XO Laptop as a commercial product, OLPC finally gave in, letting consumers get their own device for a $399 donation (that price also paid to send one to a child in a developing nation). Unveiled back at CES, the Android-powered XO Tablet marks OLPC's first proper foray into the consumer space, with the device available for $149 at major retailers like Walmart and Target. So is it any good?%Gallery-195835%

One Laptop per Child 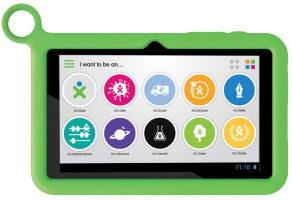 At first blush, the XO is a sight to behold. It screams "kids' tablet," rocking a neon green case that hearkens back to OLPC's original hardware. The form factor, too, offers a respite from the weary world of samey slates, with rounded rubber corners and a big ring in the upper-left-hand corner of the case. All of these traits owe a good deal to the input of Yves Béhar; the industrial design rockstar has been on board with One Laptop Per Child for some time now, giving the company's hardware a unique ruggedness. Take that ring, for example, a flourish seemingly borrowed from his Nook Color / Tablet line, which had a largely vestigial carabiner in one corner. Here, however, the functionality is clear: it gives tiny fingers a place to grab hold of the tablet.

The rear side of the included case has little Béharian touches, as well. Atop that textured rubber is a big, blue plus sign. Turn the tablet at a 45-degree angle and it forms an "X," alongside the loop's "O." Those nubs also give way to a small and subtle row of X's at the edge of the loop. Behar also had a hand in UI design on the device, but his influence on the hardware ends here.

The thing is, for all the charm of its rugged green rubber exterior, that's only a skin, a silicone casing that fits snugly around the tablet's frame. Peel it off to reveal the true device inside: a run-of-the-mill budget tablet with a big Vivitar logo stamped on the rear. Incidentally, OLPC's first consumer device also happens to be the first one the company didn't have a direct hand in designing.

Without that skin, the XO Tablet is a chunky thing. Which is to be expected, really: it's a $149 tablet, destined to wind up in the hands of 3-year-olds. The front of the device is monopolized by a modest 7-inch, 1,024 x 600 display and a whole lot of bezel. Truly, the screen's nothing to write home about. For starters, unlike past OLPC devices, the XO Tablet wasn't designed to be used in sunlight; such functionality isn't as crucial here as it was with many of the developing nations for which the company's earlier products were intended.

On the top of the big black bezel, you'll find a front-facing 1.2-megapixel camera and to the left, a small charging light that lets you know when the micro-USB cable is doing its job. The only two physical keys, the volume rocker and power button, live along the top edge; both are sufficiently large for kid hands. Along the bottom edge is a microSD slot to help you supplement the 8GB of built-in storage. On the right side, meanwhile, you've got your mic, headphone jack, mini-HDMI and that micro-USB socket.

The back of the XO has a similar-looking indented-dot pattern, except, unlike the case, it doesn't offer much in the way of grippage. There's also a pair of small speaker grilles up top -- as you might expect, they don't really do the pre-loaded "Also Sprach Zarathustra" MP3 much justice. To the left, is a 2-megapixel camera -- a bit better than the 1.2MP shooter on the front, but not by much; the photos are just as grainy and low-res as you'd expect them to be. The middle of the back is devoted to the OLPC XO / child symbol and Vivitar logo, a not-so-subtle reminder that OLPC opted not to go it alone this time out.

At the end of the day, we're working with OEMed hardware. The specs on the XO Tablet look awfully similar to those on the 7-inch kids' tablet the company trotted out back at CES, one that has already been outfitted with a number of kids' brands like Hello Kitty and My Little Pony. It's a modestly specced, ruggedized budget tablet designed for rough-and-tumble kid usage, because, let's face it, however responsible your own rugrat might be, odds are you don't want him spending too much time with your iPad mini. Inside is a modest 1.6GHz dual-core processor. We didn't encounter too many crashes during our time with the device, and most apps loaded quickly enough to satisfy kids' short attention spans. Meanwhile, OLPC says the battery should give kids around 7.5 hours of runtime, but in a way that's a moot point unless your child's actually allowed that much uninterrupted screen time.

In the end, $149 for a tablet is a little difficult to stomach, particularly with better-specced devices like the Hisense Sero 7 Pro currently going for less. And while the Behar-designed case does help the tablet stand out from the crowd, even going so far as to improve the ergonomics, it's on the software front that OLPC's really hoping to set itself apart.

Fire up the XO and you'll see a lock screen with two choices. Drag the XO icon to the right and enter your password, and you'll be greeted by the standard Android 4.2 home screen. To be clear, there's a fully functioning Android device here, but if you went out of your way to pick up this tablet, odds are good that you're not in it for the classic Jelly Bean experience. Swipe the other way (and enter the password again) and you'll find yourself inside OLPC's Dreams interface, skinned heavily so as to make the Android experience unrecognizable, save for the familiar toolbar at the bottom.

The words "I want to be an..." are at the top of the page, with a number of merit badge-like icons below, each representing a different career path. There are 15 in all -- a pretty solid selection of the sort of things many of us imagine ourselves being when we were kids: astronauts, doctors, artists and teachers (coder, too -- this is 2013, after all). We started with "Writer," something we hope to be one day. Clicking on the dream brings you to a page full of apps clustered around the given topic. At the top of the page is a well-known representative of said career path -- for Writer, you get William Shakespeare, a fellow who certainly knew his way around a quill. Clicking on that image will bring you to a Wikipedia entry for old Billy S. Meanwhile, tapping Shakespeare's name allows you to swap him out for another selection.

Below the hero are a number of pre-selected apps divided by skill level. OLPC says it opted for this method since age categories don't really take into account the different rates at which children develop. In the case of the Writer category, the Beginner section includes links to picture books, while the Intermediate level has four apps including a journal and Wiktionary. Finally, Advanced has Wattpad, a community for amateur writers. While all of the content is targeted at kids, parents are probably going to want to give everything a look-see before handing it off, particularly when it comes to things like e-books, which will require your password to download (you don't want your child freely downloading titles on your credit card, after all). Also, this is a small nitpick, but we were slightly irritated by the fact that hitting the back button in a given app will dump you on the main menu, rather than your most recently selected dream.

All in all, there's a fairly wide selection of apps here, around 150 (including both English and Spanish offerings), thanks to content partners like Discovery and Oxford University Press. The common thread is free educational apps targeted at engaging a child's young mind, a noble goal for this manner of device and one that does unquestionably add to its value. Clicking the apps icon in the upper-right-hand corner of the Dreams page brings you to a more familiar layout featuring all of the available apps. In the upper-left-hand corner of Dreams, meanwhile, is an icon for a menu that gives you access to your collection of books, music and video. You can also toggle between Spanish and English (each of which have their own selection of apps and all of which appear when you go to the full app menu), browse the internet and adjust parental settings for all of the kids' accounts on the device.

In parental settings (also a standard feature in the latest version of Android), you'll be able to turn Google Talk and internet access on and off and block access to individual apps. (You can also choose to enable the tablet only for use with the pre-selected apps.) Additionally, the menu gives you a shortcut to the vanilla Android interface, where you can use the XO as a standard tablet. And if you'd like to see how your child is progressing, clicking his or her profile in the Dreams menu gives you access to a page letting you know just how far they've advanced in the various career goals (73 percent writer here). You can't, however, import apps directly from the vanilla Android ecosystem to the Dreams interface, as OLPC only allows ones it's approved directly. That also means, of course, that access to Google Play is limited to the stock Android side of things.

The XO's skin offers an innovative and easy-to-use interface that should get kids up and running quickly (though the hardware itself doesn't exactly load all of the apps instantly). OLPC's also done a pretty good job putting access in the hands of parents. As for the apps themselves: they're pretty hit or miss. Even as grown-ups, we enjoy playing around with Animating Touch and My Piano. Others, like Logodroid, are simply baffling.

The XO Tablet isn't set to win any hardware awards -- but then, no one really expected top-of-the-line design or performance from a kids' tablet. On the software side, things are more compelling. OLPC has created a unique approach to helping broaden kids' knowledge and encourage curiosity -- goals we can easily get behind. But while the company has some solid app partners, the selection here is a bit uneven (though it does, ultimately, add value to Vivitar's rebadged hardware). Most importantly, perhaps, the price feels steep for a children's toy. And that's a bummer for a company with such a great cause.