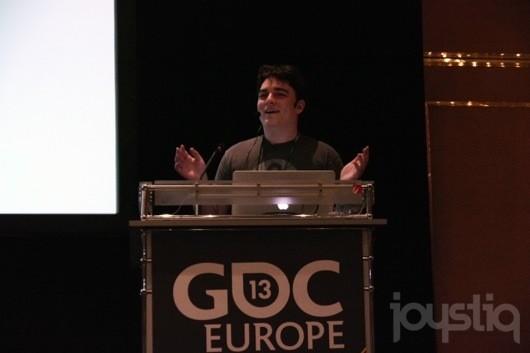 There is a great, undiscovered potential in virtual reality development. Sure, you can create lifelike virtual worlds, but you can also make players sick. Oculus VR founder Palmer Luckey and VP of product Nate Mitchell hosted a panel at GDC Europe last week, instructing developers on how to avoid the VR development pitfalls that make players uncomfortable. It was a lovely service for VR developers, but we saw a much greater opportunity. Inadvertently, the panel explained how to make players as queasy and uncomfortable as possible.

And so, we now present the VR developer's guide to manipulating your players right down to the vestibular level. Just follow these tips and your players will be tossing their cookies in minutes.

Note: If you'd rather not make your players horribly ill and angry, just do the opposite of everything below.

Include lots of small, tight spaces

In virtual reality, small and closed-off areas truly feel small, said Luckey. "Small corridors are really claustrophobic. It's actually one of the worst things you can do for most people in VR, is to put them in a really small corridor with the walls and the ceiling closing in on them, and then tell them to move rapidly through it."

Meanwhile, open spaces are a "relief," he said, so you'll want to avoid those.

Create a user interface that neglects depth and head-tracking

Virtual reality is all about depth and immersion, said Mitchell. So, if you want to break that immersion, your ideal user interface should be as traditional and flat as possible.

For example, put targeting reticles on a 2D plane in the center of a player's field of view. Maybe set it up so the reticle floats a couple of feet away from the player's face. "That is pretty uncomfortable for most players and they'll just try to grapple with what do they converge on: That near-field reticle or that distant mech that they're trying to shoot at?" To sample this effect yourself, said Mitchell, you can hold your thumb in front of your eyes. When you focus on a distant object, your thumb will appear to split in two. Now just imagine that happening to something as vital a targeting reticle!

You might think that setting the reticle closer to the player will make things even worse, and you're right. "The sense of personal space can make people actually feel uncomfortable, like there's this TV floating righting in front of their face that they try to bat out of the way." Mitchell said a dynamic reticle that paints itself onto in-game surfaces feels much more natural, so don't do that.

You can use similar techniques to create an intrusive, annoying heads-up display. Place a traditional HUD directly in front of the player's face. Again, they'll have to deal with double vision as their eyes struggle to focus on different elements of the game. Another option, since VR has a much wider field of view than monitors, is to put your HUD elements in the far corners of the display, effectively putting it into a player's peripheral vision. "Suddenly it's too far for the player to glance at, and they actually can't see pretty effectively." What's more, when players try to turn their head to look at it, the HUD will turn with them. Your players will spin around wildly as they desperately try to look at their ammo counter.

Possible applications: Any menu or user interface from Windows 3.1.

Disable head-tracking or take control away from the player
"Simulator sickness," when players become sick in a VR game, is actually the inverse of motion sickness, said Mitchell. Motion sickness is caused by feeling motion without being able to see it – Mitchell cited riding on a boat rocking in the ocean as an example. "There's all this motion, but visually you don't perceive that the floor, ceiling and walls are moving. And that's what that sensory disconnect – mainly in your vestibular senses – is what creates that conflict that makes you dizzy." Simulator sickness he said, is the opposite. "You're in an environment where you perceive there to be motion, visually, but there is no motion. You're just sitting in a chair."

If you disable head-tracking in part of your game, it artificially creates just that sort of sensory disconnect. Furthermore, if you move the camera without player input, say to display a cut-scene, it can be very disorienting. When you turn your head in VR, you expect the world to turn with you. When it doesn't, you can have an uncomfortable reaction.

Feature plenty of backwards and lateral movement
Forward movement in a VR game tends not to cause problems, but many users have trouble dealing with backwards movement, said Mitchell. "You can imagine sometimes if you sit on a train and you perceive no motion, and the train starts moving backwards very quickly, or you see another car pulling off, all of those different sensations are very similar to that discomfort that comes from moving backwards in space." Lateral movement – i.e. sideways movement – has a similar effect, Mitchell said. "Being able to sort of strafe on a dime doesn't always cause the most comfortable experience."

"Quick changes in altitude do seem to cause disorientation," said Mitchell. Exactly why that happens isn't really understood, but it seems to hold true among VR developers. This means that implementing stairs or ramps into your games can throw players for a loop – which, remember, is exactly what we're after. Don't use closed elevators, as these prevent users from perceiving the change in altitude, and is generally much more comfortable.

Don't include visual points of reference

When players look down in VR, they expect to see their character's body. Likewise, in a space combat or mech game, they expect to see the insides of the cockpit when they look around. "Having a visual identity is really crucial to VR. People don't want to look down and be a disembodied head." For the purposes of this guide, that makes a disembodied head the ideal avatar for aggravating your players.

Shift the horizon line
Okay, this is probably one of the most devious ways to manipulate your players. Mitchell imagines a simulation of sitting on a beach, watching the sunset. "If you subtly tilt the horizon line very, very minimally, a couple degrees, the player will start to become dizzy and disoriented and won't know why."

Possible applications: Drunk at the Beach.

Shoot for a low frame rate, disable V-sync
"With VR, having the world tear non-stop is miserable." Enough said. Furthermore, a low frame rate can be disorienting as well. When players move their heads and the world doesn't move at the same rate of speed, its jarring to their natural senses.

In Closing
Virtual reality is still a fledgling technology and, as Luckey and Mitchell explained, there's still a long way to go before both players and developers fully understand it. There are very few points of reference, and there is no widely established design language that developers can draw from.

What Luckey and Mitchell have detailed - and what we've decided to ignore - is a basic set of guidelines on maintaining player comfort in the VR space. Fair warning though, if you really want to design a game that makes players sick, the developers of AaaaaAAaaaAAAaaAAAAaAAAAA!!! already beat you to it.
In this article: gamescom-2013, gdc-europe-2013, mac, nate-mitchell, oculus-rift, palmer-luckey, pc
All products recommended by Engadget are selected by our editorial team, independent of our parent company. Some of our stories include affiliate links. If you buy something through one of these links, we may earn an affiliate commission.