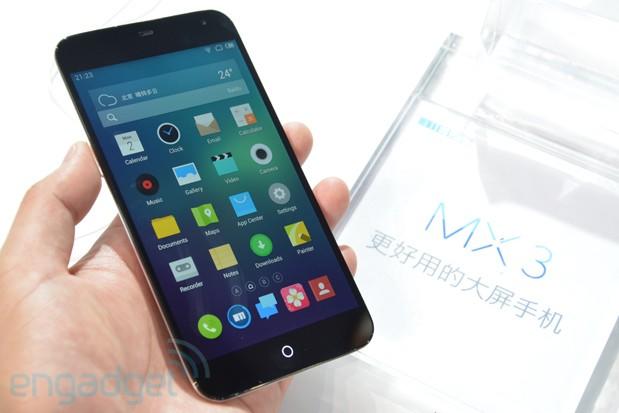 Having sat through Meizu's entire launch event in Beijing, we have to admit: the new MX3 took us by surprise. We weren't expecting much after knowing some of the key specs from the leaks, and to be frank, the Chinese company lost its way with the MX2; but Jack Wong's team seems to have put its focus back in place with its latest flagship. First off, while the MX3 has preserved the predecessor's metallic-rim design, Meizu has now managed to refine the manufacturing process to remove all the sharp edges, and boy does that new body feel good. The TOL (touch-on-lens) display may look odd with its 1,800 x 1,080 resolution, but it looked good on the demo units, and that 15:9 aspect ratio has some advantage for web browsing in portrait mode.

There were many other features that we couldn't comment on based on our hands-on, such as the audio quality from the Wolfson chip and the image quality from the third-gen Sony 8-megapixel sensor, but the presence of these components suggests that Meizu may be headed back in the right direction. The number of improvements on the slick, Android 4.2-based Flyme 3.0 is also impressive, making it slightly more user-friendly (especially for first-timers) as well as more pleasing to the eye. It'll just take some getting used to with Meizu's own soft key approach (virtual buttons on a "Smart Bar" plus a capacitive home button). Much like the battery life and radio performance, we'll only be able to properly comment on the software part over an extended period of usage, so do keep an eye out for our MX3 review in the near future. Oh, and we have a hands-on video after the break. 23
In this article: android, china, exynos5octa, featured, features, flyme3.0, hands-on, meizu, mobilepostcross, mx3, video, wolfson
All products recommended by Engadget are selected by our editorial team, independent of our parent company. Some of our stories include affiliate links. If you buy something through one of these links, we may earn an affiliate commission.