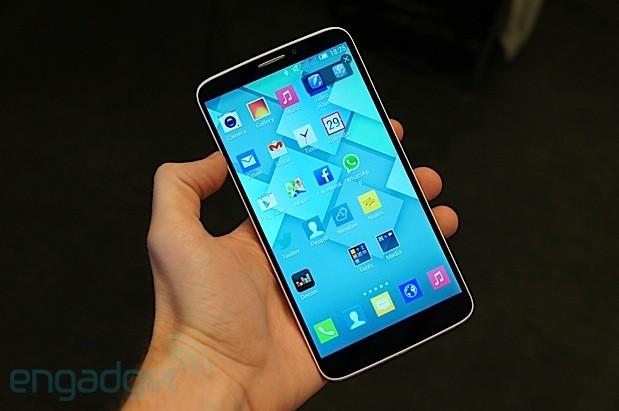 Okay, you have to admit: there might actually be something to this whole large smartphone business, started by Samsung two years ago at this very trade show. Not only has the trend not gone away, nearly every major OEM is hopping on the bandwagon. Alcatel OneTouch is interested in joining the party, and it's entering the field with a doozy aptly called the Hero, a 6-inch behemoth with a full HD (1,920 x 1,080) display and a few tricks up its sleeves. It's relatively easy on the hands, with a curved back and a decent thickness of 8.5mm. In fact, compared to the Acer Liquid S2 (another 6-inch smartphone announced at IFA), it's 6mm narrower, 7.5mm shorter and 0.5mm thinner -- great news, especially since we felt pretty comfortable with the S2 during our hands-on.

In many parts of the world, Alcatel OneTouch is still an unknown, despite the fact that the manufacturer has a reputation for pushing out up to a dozen handsets at one time. While this is still very much the case this week, we've noticed that the company has put a much higher amount of focus on quality. The Hero doesn't remind us of a cheap KIRF or knockoff phone. Instead, we came away much more impressed with the phone's look and feel than we originally expected. Continue past the break for more of our thoughts and the Hero's features. The Hero offers a few standout features that extend its functionality beyond what a typical 6-inch Android 4.2.2 smartphone has. The first we'll cover is the stylus, which comes housed in a special S Pen-esque holster on the bottom of the phone. It's not a unique setup by any means, but Alcatel appears to have done a pretty good job of incorporating handwriting recognition into its firmware -- for instance, our rep drew up a complex mathematical equation (at an awkward angle, making for below-average penmanship), which the phone processed accurately within a couple seconds. As you'd expect, you'll also have the opportunity to take notes, sketches and plenty of other stylus-worthy activities.

Secondly, a dock port with eight magnets (eight in total) sit along the right side of the Hero's back, and Alcatel's taking advantage of this feature with a flurry of clever cases and docking stations that we enjoyed using. A couple prototypes, which we'll dive into detail on in a separate post, included a flip cover with an E Ink screen and a tiny docking port with built-in pico projector. One cover boasts Qi wireless charging capability, while another has a set of pinhole-style LEDs on the front that show you the time and the EQ when you're playing music.

Last but not least, Hero users can also grab a companion device that connects to the phone via Bluetooth. The nameless gadget acts as a featurephone that can take calls, view contacts and even find your misplaced Hero, among other things. If it sounds familiar, you've likely heard of a similar concept done by HTC known as the Mini+. Two different models will be available, with one in plastic and another in metal.

Wrapping up the specs, you'll get a 1.5GHz quad-core chipset (reps didn't confirm the brand, though we suspect it's a MediaTek), 13MP AF camera with LED flash on the back and a 2MP front-facing cam, both featuring 1080p video capture. It has a microSD slot that can support cards up to 32GB and will come in single and dual-SIM flavors (though the former only gives you 8GB internal storage while the latter contains 16GB), You'll also have a 3,400mAh battery, Bluetooth 4.0, DC-HSPA+ 42Mbps (900/2100) and quadband GSM / EDGE, dual-band WiFi a/b/g/n and WiFi Direct.

If you've suddenly discovered yourself wanting this particular device, you may need to hold off for a bit. The Hero will first roll out in China and Russia next month, with further expansion to other regions taking place at a later date. An LTE model is also in the works, but it isn't going to get to any market until 2014 at the earliest. There's also no indication of price, but we'd expect it to be more than reasonable if it wants any chance of competing with some of the bigger names out there.

In this article: alcatelonetouchhero, android, hands-on, hero, ifa2013, mobilepostcross, onetouchhero, stylus
All products recommended by Engadget are selected by our editorial team, independent of our parent company. Some of our stories include affiliate links. If you buy something through one of these links, we may earn an affiliate commission.