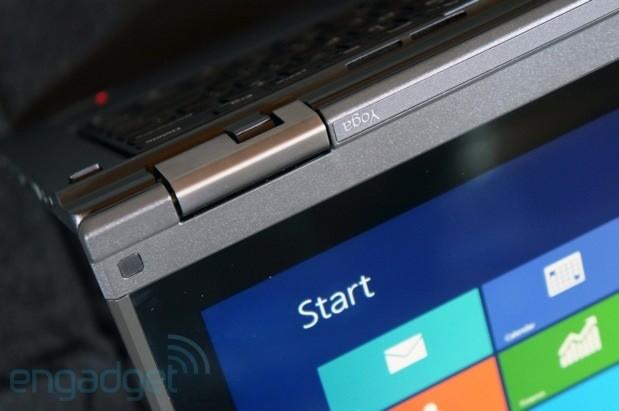 When the original Lenovo Yoga came out, everyone seemed to have the same complaint: when you flipped the screen over into tablet mode, you had to rest your hands against the keyboard on the other side. It didn't matter that the keyboard automatically disabled; it felt awkward to press your fingers into flappy keys instead of a smooth surface. Well, Lenovo seems to have taken that criticism to heart: the company just announced the ThinkPad Yoga, a 12-inch, business-friendly model with a keyboard that flattens as you flip the screen back into tablet mode. How does this so-called Lift and Lock system work? Here's the short version: as you flip the display over, a mechanical setup causes the platform between the keys to rise so that it's level with the buttons. Meanwhile, the keys get clamped in place so you can't press them. Finally, folding the screen over causes a set of feet to pop out so that there's some buffer space around the keys when you place the "tablet" face-up on a flat surface (a handy thing when you're working on grimy airplane tray).

As you can imagine, a design like this requires a reinforced hinge, along with extra space inside the chassis; for now, at least, Lenovo doesn't know how to put a keyboard like this in a super-skinny machine, which is why you're not going to find it on the new Yoga 2 Pro, the replacement to the Yoga 13. At any rate, it's not a perfect solution -- you can still feel the individual buttons -- but at least they stay put. Also, it works much more quietly than you might expect. To be fair, our expectations were low in that regard: when Lenovo first told us it was working on a self-flattening keyboard, we envisioned a machine with a noisy motor inside, similar to the failed Acer Aspire S5. After watching a demo, though, we were impressed by how little it creaks -- and a Lenovo rep promised it would make even less noise by the time it ships. Other than that flattening keyboard, this looks like any other recent ThinkPad, with a monochromatic black chassis, an island-style keyboard and, of course, Lenovo's signature red TrackPoint. It also has a OneLink port, which you can use with an optional dock to access HDMI, USB and Ethernet ports using a single cable. Finally, like other new ThinkPads, it features a large, buttonless trackpad, which means if you're a TrackPoint diehard you're going to have to get used to pressing down on the top of the touchpad instead of feeling around for dedicated buttons. (We promise: it gets easier.)

As we said, this is a 12.5-inch screen, which puts it right in between the original Yoga 13 and the smaller Yoga 11S. And what a lovely screen it is. Not only is it 1080p resolution, but the IPS panel allows for some pretty wide viewing angles, as we found in our brief hands-on. Also, Lenovo says the display will be offered with an optional active digitizer for pen input. All told, then, it's on par with the screen used on the ThinkPad Helix, just a hair bigger. Under the hood, we're looking at Intel's latest Haswell processors, naturally, with your choice of spinning hard drives or SSDs (in the case of solid-state storage, capacity maxes out at 512GB). Look for it to start at $949, with shipments beginning sometime in November. For now, enjoy the hands-on photos.

In this article: hands-on, ifa2013, lenovo, lenovoyoga, lenovoyogapro, video, yogapro
All products recommended by Engadget are selected by our editorial team, independent of our parent company. Some of our stories include affiliate links. If you buy something through one of these links, we may earn an affiliate commission.