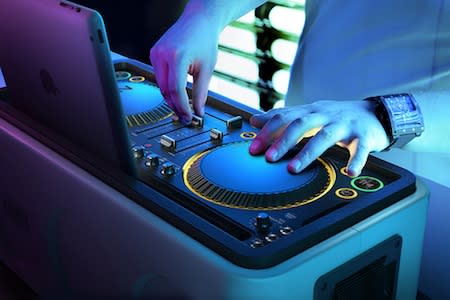 Get out the smelling salts and snuggle close to your vinyl, DJ purists. Philips is teaming up with award-winning DJ and producer Armin van Buuren to launch the M1X-DJ System for iPad and iPhone. Utilizing both a Lightning connecter and Bluetooth, the dock allows users to mix, play and share their music in one compact DJ controller/sound system.

Equipment costs are often a barrier of entry for wannabe DJs, an issue that Armin has encountered when talking to young fans looking to enter the field. Granted, at US$526 dollars, plus the cost of an iOS device, this setup still isn't cheap, but neophyte DJ's will get a lot of hardware for their investment.

The M1X-DJ System has two professional-grade platters, crossfaders and controls. It also features several inputs and outputs for linking up multiple systems for enhanced sound. Mobile users can expect around five hours of battery life running off eight D-cell batteries, and of course the unit can be plugged into a power source.

The M1X-DJ rig will also work with the djay 2 app from Algoriddim, giving users another way to fade and mix tracks. The already popular app received the Apple Design Award in 2011 and peaked as the No. 1 paid app on the iTunes App Store.

The M1X-DJ Sound System will be available to buy sometime in November.

In this article: dj, m1x-dj
All products recommended by Engadget are selected by our editorial team, independent of our parent company. Some of our stories include affiliate links. If you buy something through one of these links, we may earn an affiliate commission.
Share
Tweet
Share