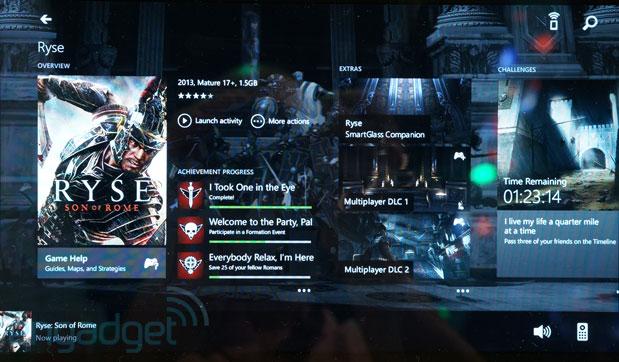 With the new Xbox this November, Microsoft's bringing a new iteration of SmartGlass to iOS, Android, and Windows Phone devices. And with said new iteration comes promised SmartGlass ubiquity. Microsoft GM and SmartGlass team lead Ron Pessner told Engadget as much in an interview this week on all things SmartGlass for Xbox One. You'll need to download a new (still free) SmartGlass app to your Smart device of choice come launch day (the new app won't function with Xbox 360, just the One).

Up to 15 of your best friends can bring their Smart devices over and...well, nothing just yet, but the Xbox One will support 16 Smart devices connected at one time (double the connected controller cap). Just imagine the possibilities for virtual canasta! Okay, not so thrilling, but the potential for games like Monopoly or Dungeons & Dragons is evident. Or maybe something more like Spaceteam?

Pessner also promised that the connectivity between Smart device and console is "three-and-a-half times faster" on Xbox One than with 360 (depending on your home wireless setup), and the first time "only takes about four seconds." And while on the go, the SmartGlass app can be used for mobile shopping, allowing a game or other piece of content to be purchased and made available when you get home. Pessner wouldn't go into specifics, but he told us, "We definitely want to make sure it's a seamless process for customers and they're able to find a piece of content regardless of where they are -- the web or the SmartGlass app -- and being able to have that content ready for them to play when they return to their Xbox One." The remotely queued content will show up as pinned to your Dashboard when you get back to the console, available to play immediately.

Though every game doesn't have unique SmartGlass functionality, all games on Xbox One have some form of SmartGlass built in. Since functionality like Game DVR is ubiquitous across all games, so too is SmartGlass access to every game's DVR clips. Pessner wouldn't tell us whether you can share out those clips via social media using the SmartGlass app, but it seems a no-brainer. Game DVR isn't the only way SmartGlass nudges into every game: the other side of the coin is Xbox One's "Xbox: Help!" functionality. "We are leveraging the fact that we know the context of what the user's doing to deliver manuals for games that give the ability to provide contextual game help," Pessner said.

SmartGlass will also offer a glimpse into the more robust game stats system on Xbox One, depending on which stats are exposed by each game. "The goal here is to...really be able to go in and take a look a little bit more about reputation and some of the other statistics around the game. These are things that the game developer can choose to expose to their community. It really is game specific, or genre specific. There are some games where users will really appreciate deeper stats in some areas, and others where it won't be as applicable," he explained.

The same philosophy applies to game control via SmartGlass. Though it's technically possible, it seems like something that Microsoft's still reticent to outright recommend. "It has to be the right fit for the right game to use SmartGlass as a dedicated controller," Pessner said in a Q&A on Microsoft's official news site. Battlefield 4's Commander Mode and Plants vs Zombies Garden Warfare are both using SmartGlass as a form of control in unique ways, but the more standard functionality will come in multiplayer games. While playing one game, SmartGlass enables you to queue for multiplayer matches in other games.

That's another one of those standard, ubiquitous features Pessner promised will help drive the Xbox One's SmartGlass use even further than its predecessor. He also said that the new apps will be ready for the console's launch on November 22nd.

Live TV is also part of the SmartGlass experience, with browsing handled via a touch-based One Guide. Though Netflix, Hulu, and other such services will offer some form of SmartGlass controller support, it sounds like they're distinct entities from the One Guide. In so many words, the One Guide seems to only provide a television browsing experience, rather than a single place to unify all viewable content on the Xbox One. Pessner said we'll see more detail on everything SmartGlass in the coming weeks in the lead up to the launch of Xbox One this holiday.

In this article: hdpostcross, interview, microsoft, ronpessner, smartglass, video, xboxone
All products recommended by Engadget are selected by our editorial team, independent of our parent company. Some of our stories include affiliate links. If you buy something through one of these links, we may earn an affiliate commission.