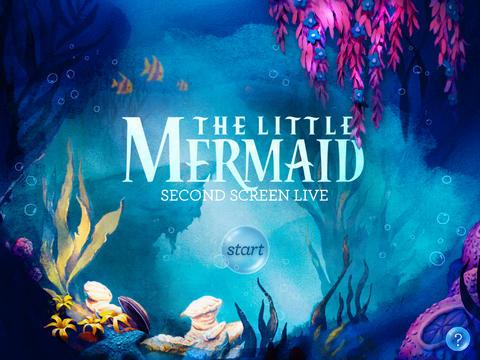 We all know the drill by now, and if you forget there's usually a warning: please turn your mobile devices off / silent, the movie is starting. For a special Second Screen Live showing of Disney's The Little Mermaid however, it's going to be different as moviegoers are encouraged to use their tablets for an augmented experience. Disney has created an iPad app for viewers to download before they get to the theater, which mirrors apps we've seen for home viewing with synchronized games, sing-a-longs and trivia. That's no coincidence, since the movie's return to theaters is timed ahead of its Blu-ray release on October 1st.

Viewers shouldn't worry about this encroaching on their Oscar-season previews however, as it's limited to a monthlong run at the El Capitan in LA starting on the 15th, and limited showings at select other theaters (listed after the break) nationwide starting on the 20th. This is Disney's first public use of the tech after a trial run last fall alongside Tim Burton's The Nightmare Before Christmas, which had a response it described as "positive." For a family movie likely loaded with kids we can see where this might be more enhancement than distraction and maybe even for certain niche midnight screening-type environments -- but if anyone whips out a slate at Machete Kills, Her, 12 Years A Slave or Gravity we're calling the usher.

Dive In to Disney's Animated Classic Like Never Before

With an Interactive Theatrical Event for the Whole Family!

Beginning September 20, this beloved musical adventure returns to select theaters for a special limited engagement, only this time viewers are encouraged to become a part of the story. This unique engagement marks the debut of Disney Second Screen Live, a new second-screen technology that allows audiences to engage with the film, each other and their fellow audience members.

By simply downloading the free "Second Screen Live: The Little Mermaid App" to an Apple iPad or iPad mini and bringing their Mermaid-loaded devices to participating theaters, fans and families can interact with the film, play games, find hidden treasure, sing along, and compete with the audience for the chance to win great prizes!

This brand new, magical theatrical experience starts on September 20 at the following theaters:

For more information about The Little Mermaid: Second Screen Live! theater screenings, locations and ticket purchases, visit http://movies.disney.com/the-little-mermaid/second-screen-live . Tickets are now available for purchase online or at the box office of participating theaters.

To download the FREE "Second Screen Live: The Little Mermaid App," visit the iTunes Store. (iPad or iPad mini with iOS 5.0 or higher is required.)

On October 1, 2013 fans can also take home their favorite film that gave voice to a whole generation as "The Little Mermaid" splashes its way into homes for the first time ever on Blu-ray 3D™, Blu-ray™, Digital Copy and High Definition Digital formats. For more information, visit Disney.com/TheLittleMermaid.

About The Little Mermaid:

Ariel, a fun-loving mermaid, is off on the adventure of a lifetime with her best friend, the adorable Flounder, and the reggae-singing Caribbean crab Sebastian at her side. But it will take all of her courage and determination to make her dreams come true -- and save her father's beloved kingdom from the sneaky sea witch Ursula.

The Little Mermaid was written and directed by John Musker and Ron Clements. It is rated G.

About The Walt Disney Studios:

For nearly 90 years, The Walt Disney Studios has been the foundation on which The Walt Disney Company was built. Today, the Studio brings quality movies, music and stage plays to consumers throughout the world. Feature films are released under the following banners: Disney, including Walt Disney Animation Studios and Pixar Animation Studios; Disneynature; Marvel Studios; Disney|Lucasfilm; and Touchstone Pictures, the banner under which live-action films from DreamWorks Studios are distributed. The Disney Music Group encompasses the Walt Disney Records and Hollywood Records labels, as well as Disney Music Publishing. The Disney Theatrical Group produces and licenses live events, including Disney on Broadway, Disney On Ice and Disney Live!

For more technical details please contact one of the Disney reps listed below.

In this article: app, apple, disney, hdpostcross, ipad, movietheater, secondscreen, thelittlemermaid
All products recommended by Engadget are selected by our editorial team, independent of our parent company. Some of our stories include affiliate links. If you buy something through one of these links, we may earn an affiliate commission.