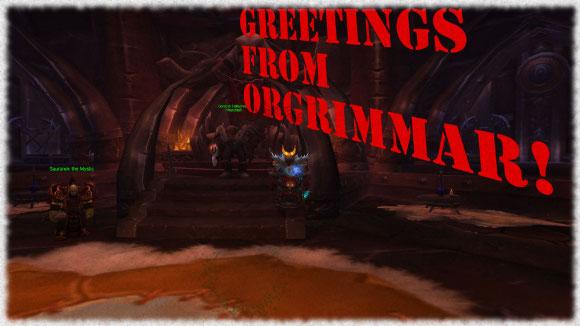 Well, friends, if you're reading this then you are likely doing just like me and anxiously waiting for servers to open back up and to begin the Siege of Orgrimmar! I mean, I'm so excited I've gone as far as to faction change and bring Lodur back to his home town roots and have gone back to the Horde! As such I decided to take a quick photo with the soon to be former Warchief, you know, for posterity.

So with the final countdown at hand, it is time to take stock of all the last minute notes and things we should know. How will Healing Rain fare? Any other last minute changes that occurred over the course of the last two weeks? How are those very first fights going to go as we make our way into Orgrimmar?


Another look at Healing Rain

Last article we talked a lot about the 30% nerf coming to Healing Rain. It is a change that is born from the behavior changes of the AoE healing to attempt and reduce the amount of lag happening in 25-man raids. So here is the excerpt straight from the official patch notes.

Healing Rain healing has been reduced by 30%, and the area-of-effect has been increased to 12 yards (up from 10 yards). In addition, Healing Rain now functions like a smart heal, healing the 6 most injured friendly targets within range, and minor guardians are no longer targeted (Wild Imps, Bloodworms, Snakes from Snake Trap, etc.). There has been no change to the total amount of healing granted by the ability.

So there are quite a few changes here. The 30% nerf is pretty self explanatory, as is the range increase to 12 yards. The behavior changes come in the form it becoming a smart heal, and now only healing the 6 most injured friendly targets inside of the rain, as well as no longer looking at minor guardians such as spell procs and effects that generate additional bodies. Overall, the behavior of the spell is something that as a healer, you aren't really going to have to make any adjustments on your own use of the spell to make accommodations for.

The good news is, after some times of testing this out, it really isn't a nerf. That feels really awesome to say. The changes actually make the spell feel a little bit better than it has been since we first received it. The functionality of it healing the 6 most injured targets is actually quite nice, it allows for the maximum amount of healing to be done to the targets that need it the most, and ensures that you aren't wasting healing to overhealing on people that just don't need it. The only downside is that it doesn't apply Ancestral Vigor from Purification to everyone standing in your HR like it did before. It just means you're going to have use your other heals, like Riptide, to ensure your group is reaping the maximum benefit of Ancestral Vigor. Overall, my initial fears about this change, I can happily say have all been allayed. The changes have all been for the better, at least so far.

Prepping for the Siege

We'll be talking about healing tips and tricks for the individual encounters as they come along for sure, but I thought it would be good to go over some things that you should be prepared for in the opening encounters. The first thing I'm going to recommend is looking at your secondary stats. Personally, I wound up grabbing a lot more spirit. Spirit flasks made a return to my normal usage instead of Int flasks. In Throne of Thunder I found myself shedding spirit to pick up Haste or Crit in order to keep up with damage the raid was taking and the mechanics of the fights. At the start of this raid content, we're going to be doing the opening content stat dance. Mastery and Spirit are going to be two of your very best friends until your raid gets a handle on the incoming damage and the new boss mechanics. I feel that holds true every time there is new raiding content, but it always bears repeating. I was constantly healing, and the extra spirit was just necessary to keep ahead of the mana demands, even with Telluric Currents and Mana Tide.

You're going to be doing a lot of movement, which I know some of us are absolutely loathe to hear, but it's there. Especially on fights like Immerseus, where not only are you going to have to heal adds that aren't your raid members, but you are absolutely must be able to get right on top of these adds when they are healed to full because they refund you 25% of your mana and increasing your healing done by 75% with a stacking buff. You will be making good use of Spiritwalker's Grace and that instant cast Ghost Wolf, which I'm actually a big fan of at this point. I feel like in ToT, we rarely had a good opportunity to make very good use out of SWG outside of Lei Shen.

A lot of raid wide damage will be coming our way as well. Even early on in Siege, we're going to see quite a number of boss mechanics that result in a lot of potential raid wide damage. We've seen this throughout ToT, with fights like Tortos and Magaera, and this trend is going to continue well into the next tier of content. Just don't be surprised when you see waves of death rolling across the entire raid. The new Healing Rain actually fits pretty well with this, and the new and improved Chain Heal certainly fits the bill for this raid wide damage, so expect to get miles of usage out of them. All that's left really, is to roll up our sleeves and dive right in. I'll be interested to hear what everyone's experiences are with their first forays into the Siege of Orgrimmar.