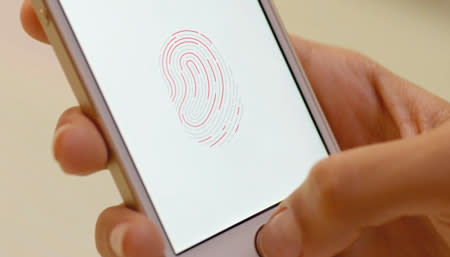 Apple's newly revealed iPhone 5s sports a number of improvements over its predecessor, but if there's one feature that truly sets the device apart from other iPhones (if not from all previous smartphones), it's Touch ID. The Touch ID sensor built into the home button of the 5s can read your fingerprint as an alternative to swipe-to-unlock or PIN/password entry. You can use this digital wizardry to make iTunes purchases and unlock the phone itself. This futuristic tech might be a fun tool for the average smartphone user, but the feature will truly shine when it enters the corporate scene.

The business world is fighting a two-front war in the name of security: Companies are doing their best to keep information locked down (both to comply with internal policies as well as government-mandated privacy efforts like HIPAA), while at the same time corralling employees that see convenience as the only priority.

Businesses large and small have relied on applications like Microsoft's Exchange ActiveSync for years to set up secure mailboxes for employees running a wide array of devices. These days, smartphones are a huge area of concern thanks to the relative ease with which they are lost (compared to a laptop, for example) as well as a user base savvy enough to find ways around the policies in question. Mobile-device management tools (like Mobileiron, AirWatch and Apple's own MDM controls in OS X Server and iOS) are an essential part of the equation as enterprises balance productivity and bring-your-own-device policies with security and corporate priorities.

"Hello all," a forum post on AndroidCentral begins. "My work recently implemented a new policy where the phone must be unlocked if using the exchange server email. My issue with it is I now loose [sic] my slide to unlock to the camera or other options based on the roms. Is there any way around it?"

This isn't an isolated case of an employee seeking out loopholes to company security efforts -- it's happening every day, and it's not isolated to Android. A cursory search of jailbreak apps for iOS immediately produces options for bypassing company-enforced device locks.

Users who seek out these solutions aren't doing so because they want to put sensitive business information -- or their own jobs -- in jeopardy; it's just a pain to type in a four-plus digit code every time they check their email or update their corporate social network.

Similarly, the businesses that implement these lockdowns aren't necessarily the ones making the call; legal and regulatory constraints, in certain fields, may take priority. The Health Insurance Portability and Accountability Act (HIPAA), for example, mandates all healthcare employees who may have patient data on their smartphones -- including names, contact info, photographs and medical records -- set up passcodes and screen time-out features to ensure sensitive data isn't leaked.

But now, on a mainstream smartphone platform, there will be a flagship device that offers both the convenience of a one-touch unlock and an unrivaled level of security. Touch ID addresses the concerns of businesses while giving users fewer reasons to seek out workarounds, and at the moment there is quite simply nothing to rival it.

It's a win / win. Or a win / win / win if you count Apple, which stands to gain a lot of fans in the business security sector. Forward thinking indeed.

In this article: biometrics, business, features, fingerprint, iPhone, iphone 5s, Iphone5s, privacy, security, touch id, touch id sensor, touchid, TouchIdSensor
All products recommended by Engadget are selected by our editorial team, independent of our parent company. Some of our stories include affiliate links. If you buy something through one of these links, we may earn an affiliate commission.